The government has limited fuel exports, citing the need to stabilize prices. 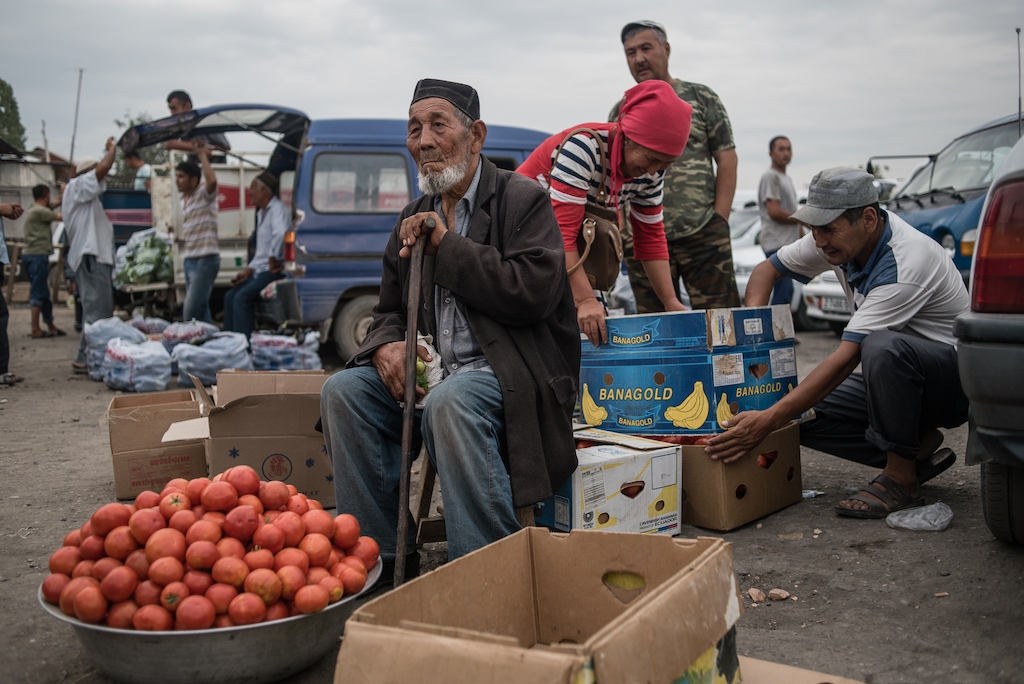 Worth their weight in tomatoes: Prices for food are spiking. (Photo: Danil Usmanov)

Rises in the prices for fuel and food are posing a big headache for Kyrgyz authorities ahead of a season that often sees politics warm up.

On March 2, the new government banned fuel exports beyond the borders of the Eurasian Economic Union, citing the need to stabilize prices on the domestic market, which have risen notably since the beginning of the year and are set to shoot up again in coming weeks.

The new fuel prices are among several factors driving up the cost of foodstuffs, which have seen big hikes against a strong fall in incomes during the coronavirus pandemic.

Wholesale prices at refineries there rose steadily last year, notwithstanding the cratering of global prices for crude oil.

Steeper price increases this year have translated to a 5 som per liter, or 14 percent, increase on what Kyrgyz petrol stations charged at the start of the year.

The Association of Oil Traders, a lobby group, said March 1 that it expects per liter costs to increase by a further 8 som before the end of the month. It noted that fuel distributors agreed to cut profits in order to keep the pump prices within these limits.

The new ban on fuel exports is unlikely to change things too much, even if it is well enforced, since Kyrgyzstan does not have vast reserves.

Local oil trading companies, some closely connected to figures in government and the parliament, have traditionally padded their revenues by re-exporting small quantities of Russian fuel to Tajikistan.

This opaque business is frowned upon by Russia, whose duty-free sales to Kyrgyzstan are intended for local consumption.

A collection of Kyrgyz refineries known for low-volume, low-quality output, also produce fuel that gets exported, although details on how much and where to are hard to come by.

Attempts to put the brakes on runaway food costs are similarly unlikely to meet with success.

Last month, the Economy Ministry said it was considering price controls on select products such as sunflower oil and sugar, which have seen increases of 62 percent and 46 percent, respectively, in the space of a year.

The major cause of food inflation is the weakening of the som. After four years as one of the former Soviet Union’s most stable currencies, it shed almost a quarter of its value when the pandemic struck. Currency depreciation in Russia and Kazakhstan – both important sources of food for Kyrgyzstan – has been marginal by comparison.

Weak harvests in those countries have put additional pressure on food prices, as have pandemic-related slowdowns at national borders.

The price spike for fuel, a hidden cost for any foodstuff requiring transportation, completes a perfect storm.

Prices for some goods are looking increasingly expensive in real terms.

Using Moscow, Nur-Sultan and Minsk as benchmarks for comparison, Kyrgyz outlet Kaktus Media found that the cost of eggs was highest in Bishkek. Milk sold in the Kyrgyz capital is cheaper than in Moscow, but more expensive than in the Kazakh and Belarusian capitals, where average incomes are more than double the size.

A basket of goods experiment launched by another local news website, 24.kg, showed a 9.6 percent rise in the cost of said basket in local currency terms during the first two months of this year, with the som declining 2.6 percent against the dollar during the same period.

The year-on-year cost in som of the basket, calculated according to prices in a Bishkek supermarket, rose 17.8 percent.

These are worrying indicators for President Sadyr Japarov, whose administration is in eager need of good news ahead of a constitutional referendum in April and parliamentary elections in the fall. Summer’s abundance cannot come soon enough.