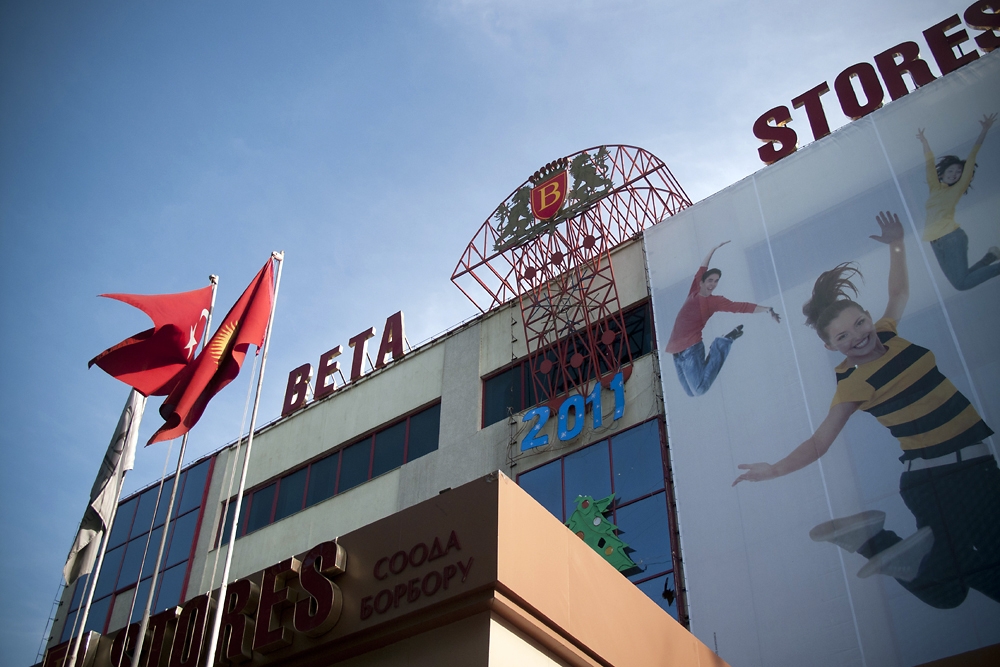 Arriving in Kyrgyzstan from Istanbul seven years ago, Orhan Eker found a niche that needed filling. There were already several established Turkish kebab joints in Bishkek. But despite the relatively small market for Turkish food, he opened a now-popular café serving home-cooked favorites: spinach and rice dishes, salads, and chicken cooked in herbs that he imports from Turkey. In Istanbul, there are many such restaurants, small places that are often an extension of someone’s apartment. But, before Eker arrived, there was not one in Bishkek.

“There are many Turkish, Russian, Kyrgyz, and Americans from the United Nations that come for a meal,” he says of his restaurant, Obzhorka, which occupies a leafy yard off one of Bishkek’s central thoroughfares. “The UN people like the salads.”

Eker is one of several hundred small-scale Turkish entrepreneurs currently operating in the Central Asian nation, working in everything from construction to Internet services. In Bishkek, the presence of Turkish firms is obvious beyond the kebab stands. A Turkish company owns two shopping centers called Beta Stores. Turkey’s Yapi Yatirim construction company built the Vefa Center, the largest mall in Kyrgyzstan. One Turkish businessman, who insists on calling himself by the name of a right-wing Turkish military officer, Alpaslan, owns Istanbul Mobilya, a furniture shop that opened in 2006. Before deciding that Kyrgyzstan was the best place for business, he evaluated other Central Asian countries. “Kyrgyzstan was more democratic and open,” he stated.

These Turkish businessmen are providing a much-needed injection of investment in remote and poor Kyrgyzstan. Officials in Bishkek are eager to cultivate these relationships.

On the governmental level, developments are moving in a favorable direction. In late April, Ankara agreed to cancel $51 million in Kyrgyz debt, signed an agreement for 90-day visa-free travel between the two countries and donated $10 million in “grant assistance” to the country. Kyrgyz Prime Minister Almazbek Atambayev obtained the concessions during a visit to Ankara. During that same visit Turkish Prime Minister Recep Tayyip Erdogan declared that the two countries would strive to boost bilateral trade from the current level, about $153 million annually, to $1 billion per year by 2016. The goal raised eyebrows around the region, as many experts wonder what can fuel such growth. At present Kyrgyzstan mostly exports vegetables and leather to Turkey and imports machinery and clothing. Comparatively speaking, Turkey’s trade turnover with Kazakhstan in 2010, a much larger market, was about $2 billion, according to a March report in Hurriyet Daily News.

“One billion dollars [overall] in the next five years should be a goal for the AKP government,” said Salih Dogan, a Central Asia expert at the International Strategic Research Organization (USAK) in Ankara, referring to Erdogan’s governing party. “Reaching this goal might not be easy because of Kyrgyzstan's economic situation. … It is not impossible, but needs a lot of effort.”

In addition to optimistic trade goals, Erdogan and Atambayev chose to stress historical ties. Kyrgyzstan is one of the five so-called “Turkic” former Soviet republics, where languages related to Turkish are spoken.

Though visitors to both countries often doubt how much the average Turk and Kyrgyz really have in common, the cultural bond between Turkey and Kyrgyzstan was something that Eker and Alpaslan, the Turkish entrepreneurs in Bishkek, stressed. "Kyrgyzstan and Turkey are connected historically. The languages are similar; the ancestors of Turkey are from Kyrgyzstan and then moved [to Anatolia]. I feel comfortable here," Eker said.

Eker first came to Kyrgyzstan in 2004, after his Istanbul-based telecommunications business went bankrupt. “There were a lot of reasons for my business failing in Turkey,” he told EurasiaNet.org. “There was the financial crisis. I made some mistakes.” He came to visit some Turkish friends who owned a hotel and “observed the situation” for about three months before having the idea to open a restaurant. (Obzhorka roughly translates as “Pig Out,” without, of course, any reference to pork.)

Though neither Eker nor Alpaslan speak Kyrgyz or Russian well, both have brought their families to Bishkek and do not plan to return to live in Turkey. Instead, they are enjoying life in what they described as a less-competitive country. In Kyrgyzstan, opening a business only takes about $5,000, explained Eker. “In Turkey you are not able to open a business for this money.”

The opportunities available in a smaller market like Kyrgyzstan make the country attractive for investment, added Alpaslan: “In Istanbul you'd find one million [furniture sellers] like me. Here you might find only 100.”

Both acknowledged difficulties working in Kyrgyzstan, namely corruption and instability. Yet both noted that every country has its challenges. “In Iraq there might be better business, but very little stability,” Alpaslan said. “You have a little more stability here.” Kyrgyzstan’s bouts of political upheaval in 2005 and 2010 were unwelcome developments, Alpaslan admitted, but he emphasized that he was determined to stay.

There might be opportunities for adventurous Turkish contractors and small-scale businessmen in Bishkek, but larger Turkish companies still view investments in Kyrgyzstan as a very risky bet. Mahmut Yuksel Sune, a member of the foreign relations commission of the Istanbul-based trade organization MUSIAD described Kyrgyzstan as not a top priority for larger Turkish firms, mostly due to problems with customs and a poorly developed banking sector, not to mention the instability.

“The golden rule is to get your investment in the country back in one year, ideally six months,” says a western businessman who has spent several years in Bishkek, adding that most foreign companies only see Kyrgyzstan as a short-term investment and want to make a quick profit and leave.

Turks willing to stay for the longer term are thus left with a comfortable slice of the Kyrgyz market, Alpaslan said.