A fledgling job-creating enterprise offers hope in a troubled corner of the country, where the government talks big and does little. 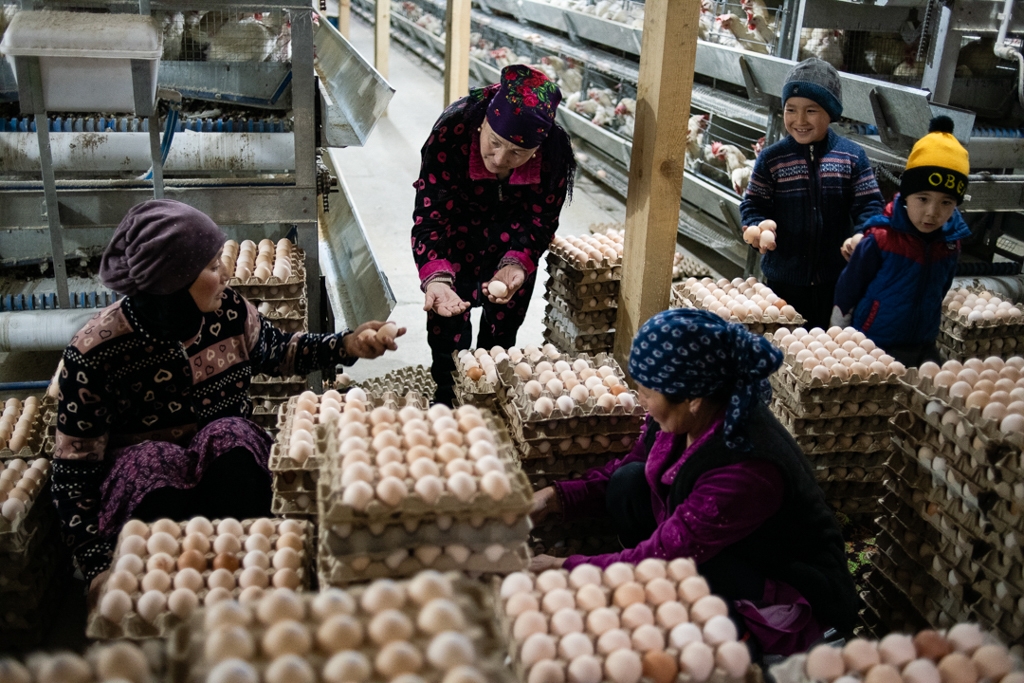 Workers sort eggs inside the henhouse. (photos by Danil Usmanov)

Adilet Adbuvaliyev’s industrial henhouse is perched on a scree-filled ledge above Kyrgyzstan’s most volatile spot.

In the valley below, in a usually dormant corner of the Batken region, fighting between Kyrgyz villagers and their neighbors in Tajikistan last April escalated into skirmishes between the two nations’ troops.

The conditions are unfavorable for building a prosperous business, but Adbuvaliyev and his family are undeterred. They started out in 2015, when they got a $3,800 grant from the government. 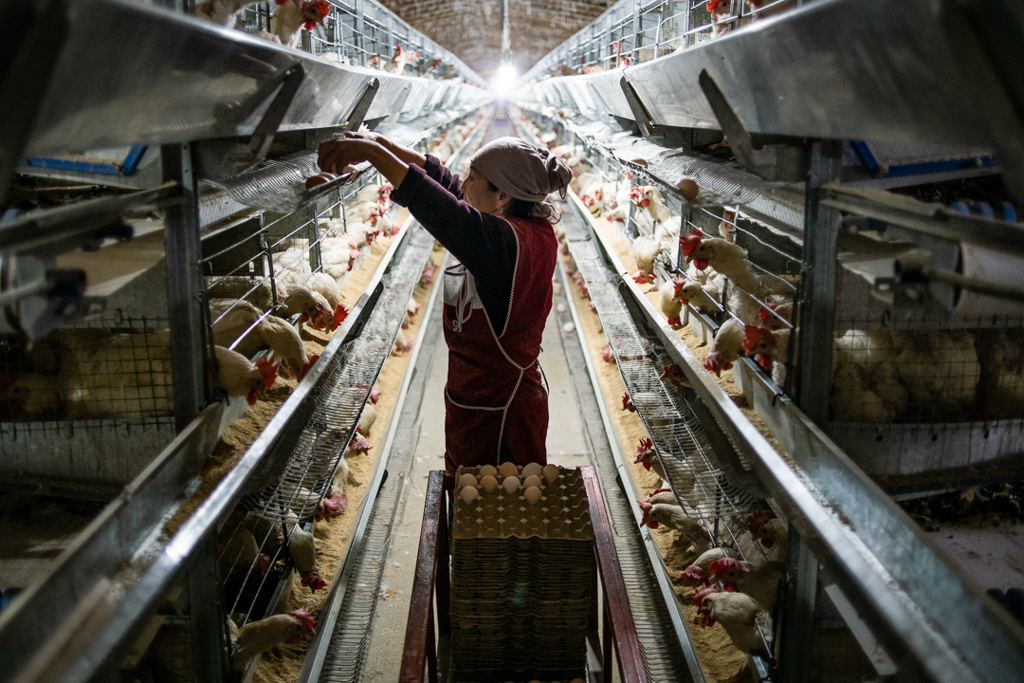 The henhouse stands on the grounds of an old army target-practice site. The river that provides irrigation water to nearby communities and which is the source of much inter-communal antagonism is a few minutes away on foot. Most of the 14 local people employed by Adbuvaliyev’s factory are women who individually stamp the name of the nearest village, Ak-Sai, onto each egg. 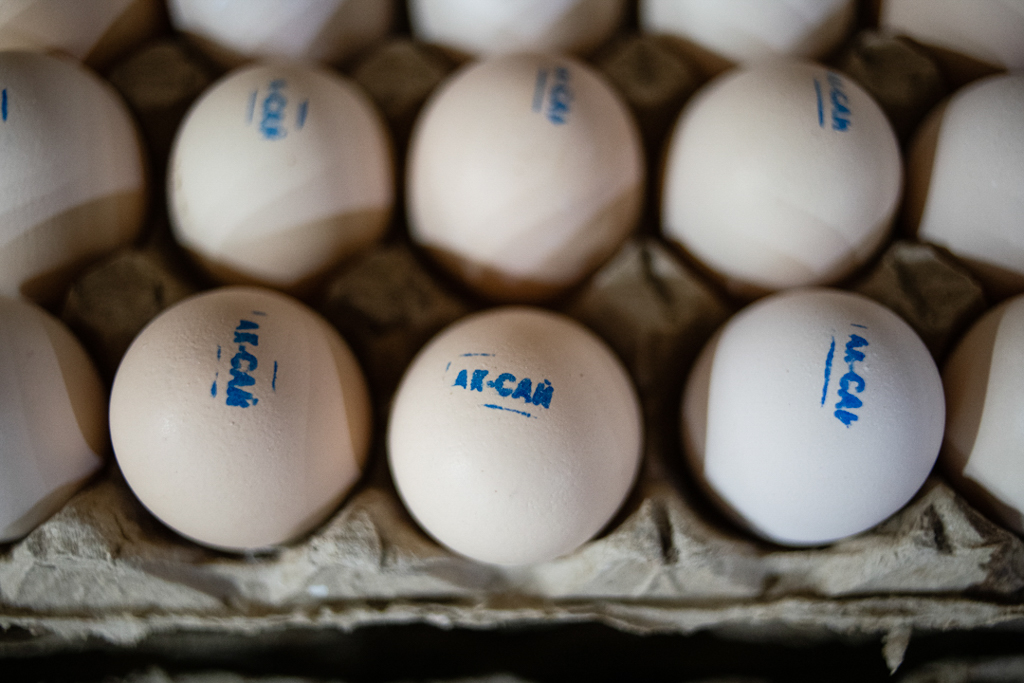 This fledgling job-creating enterprise is the kind of thing Batken, the remotest of Kyrgyzstan’s seven regions, desperately needs to remain viable, both demographically and economically.

According to official data, almost 550,000 people live in the region. Around 76 percent live in rural communities with negligible or non-existent utilities. Prospects for a prosperous life are scant. Many go abroad, usually to Russia, for work.

A taboo observation that officials will only make in private is that while parts of Batken are emptying out, neighboring regions of Tajikistan are getting increasingly crowded. Large sections of the border are still not demarcated. The unspoken implication of those inverse demographic trends is troubling.

The government does openly acknowledge, however, that Batken needs all the help it can get. Last month, the Cabinet held its first-ever off-site meeting in the region’s capital. The head of the Cabinet, Akylbek Japarov, pledged that 1.5 billion som ($15.8 million) would be spent this year on building and repairing infrastructure like irrigation canals and roads in Batken.

Under a special status law approved in September, a list of villages in Batken will get tax benefits, electricity tariff discounts, and increased pensions.

Japarov made a nod to help for private enterprise too.

“We don’t want people to leave Batken so we intend to provide benefits to entrepreneurs so that they will create businesses. We will allocate funds to ensure that jobs are created,” he said. 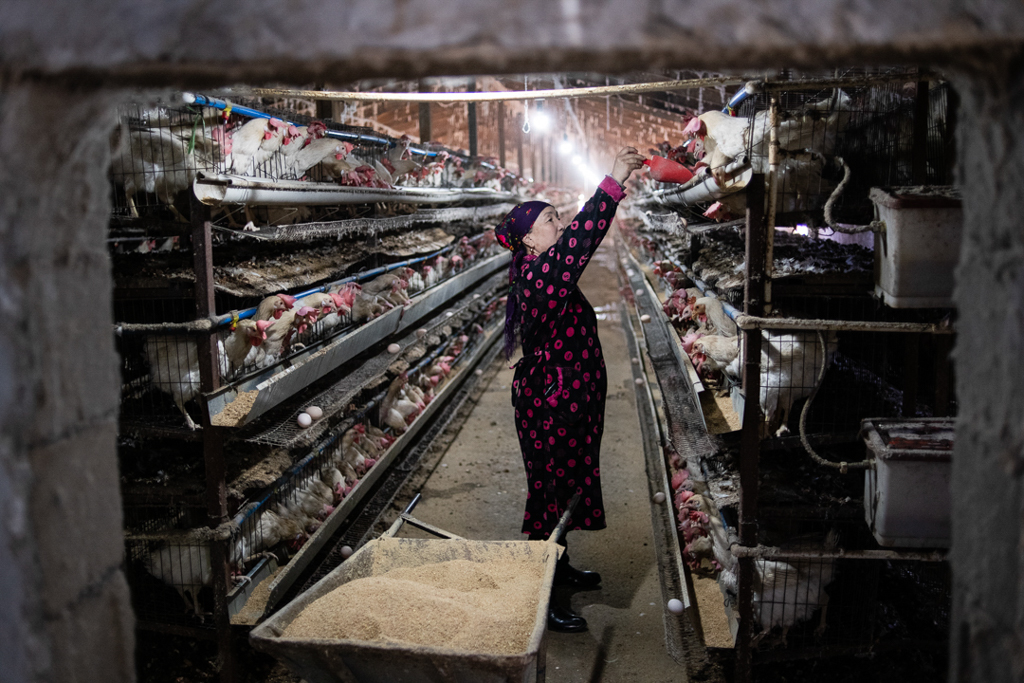 Adbuvaliyev is skeptical. He has heard similar promises before. In the meantime, he is paying off the credit he has used to build up his business so far at an 18 percent rate of interest. If all goes well – and there is no certainty that it will – he will be finished paying his current outstanding debt by 2026.

“They need to provide real credit with low interest to anybody who needs it and can pay it back,” he told Eurasianet during a brief break from making his deliveries. “At the moment, I’m just working for the bank.”

Just as damaging as the lack of access to affordable credit is the contraband from Uzbekistan and Tajikistan flooding the Batken region.

The situation with smuggling has become worse since the fighting on the border with Tajikistan last year. Kyrgyzstan reacted by shutting the border, meaning that legitimate trade has ground to a complete standstill.

Adbuvaliyev is most worried, though, about what is coming from Uzbekistan, whose government helps its own rural entrepreneurs with targeted financial support.

“I know farmers who have 2,000-3,000 birds, and they’re crying. They can’t sell their product because of all the contraband coming from Uzbekistan into Batken,” Adbuvaliyev said. “There are a whole bunch of crossing points from Uzbekistan, deliveries come in every single day. Their eggs are cheap, because they’re subsidized [by the government].”

The head of the Kyrgyz security services, Kamchybek Tashiyev, periodically breathes fire over the problem of contraband, although he appears more preoccupied with underground trade with Tajikistan than what is happening across the border with Uzbekistan. He returned to the topic on March 26, when he vowed that every measure was being adopted to ensure goods were not being ferried unlawfully between Kyrgyzstan and Tajikistan.

“Not one liter of motor fuel will cross into Tajikistan [from Kyrgyzstan], and they will send us nothing from there,” he told journalists. “After we have resolved all the issues with [border demarcation], then we will relax things, we will begin to work.”

Such assertions raise wry smiles in Batken. Even the presidential envoy to the region, Abdikarim Alimbayev, acknowledges that the smuggling is happening.

“Yes, there is smuggling, but it is small-scale, just what people can carry in cars,” he told Eurasianet.

But as Adbuvaliyev’s father, Matisa Nadyrov, told Eurasianet, the contraband coming into the country is enough to put the survival of their business into question. Many other small business owners and traders have similar complaints.

“We produce 25,000 eggs every day and deliver them everywhere from the Leilek district to Osh,” Nadyrov said, referring to one area nearby and the country’s second-largest city, a more than five-hour drive away, respectively. “But they cannot stop the smuggling. Leilek gets cheap eggs from Tajikistan. Osh gets eggs from Uzbekistan. We even have smuggling from Russia. It’s a complete mess. When we go to stores, they ask if we have done laboratory and veterinary inspections. But for the eggs that are imported, there aren’t the same questions.”

There is a strong sense of disconnect between the daily challenges confronted by the owners of small and medium enterprises – the ones that can be set up with the most ease, in other words – and the lofty ambitions described by officials from the capital, Bishkek.

When he traveled to Batken in February, Japarov, the head of the Cabinet (not to be confused with President Sadyr Japarov, to whom he is not related), talked about the town of Kyzyl-Kiya, which is bigger in size than the regional capital, becoming a hub for trade between Central Asia and China.

“As soon as we create the right conditions and install phytosanitary laboratories, we will be able to export high-quality and environmentally friendly products to neighboring China through the Irkeshtam checkpoint. Kyzyl-Kiya will become the largest regional trade hub between Central Asia and China. Batken and Isfana airports will become international terminals. The Leilek free economic zone will start operating as planned,” Japarov said, setting his gaze on a distant point in the future.

But as Bekbolot Madymarov, the founder of a small fruit processing plant in Batken, noted to Eurasianet, existing transportation infrastructure is inadequate even for what little private enterprise exists now.

“The main problem is that we’re so far away. The logistics are complicated. In Osh or in the north, there are more people, or they have better transport links, railways and so on,” he said.

And talking about vast continent-spanning visions feels hollow when in Batken city itself the most basic amenities are lacking.

“Even in the city we have very weak infrastructure,” said Madymarov. “To start up something, even to get water, all these things you have to do for yourself.”