Japarov has said he is waging a war to rid Kyrgyzstan of corruption. 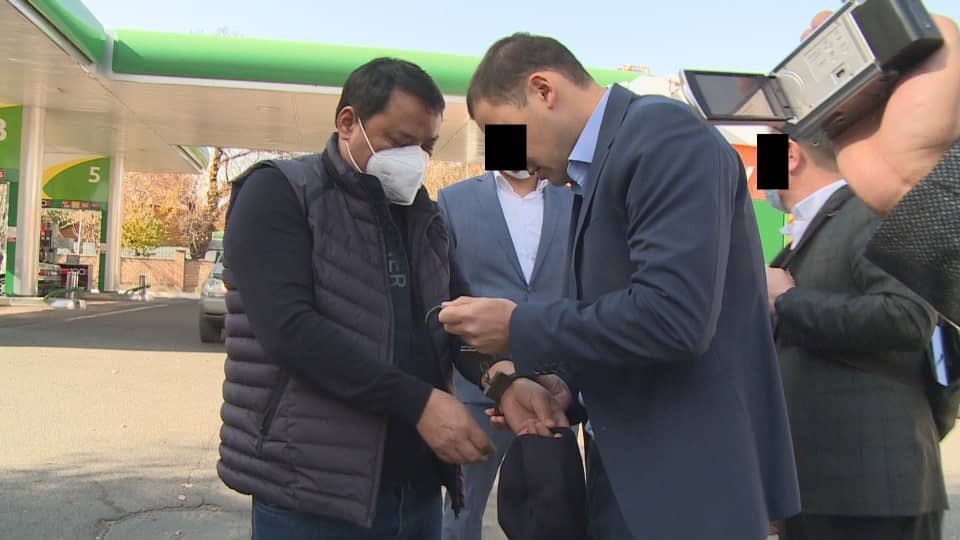 Kyrgyzstan’s security services say they have arrested Rayimbek Matraimov, a notorious and politically influential former deputy head of the customs service who is alleged to have made hundreds of millions of dollars from smuggling.

The State Committee for National Security said in a statement on October 20 that Matraimov has since 2016 operated a corrupt scheme to “extract shadow income during [his] administration of the customs system.”

The arrest stands – so long as it is followed by a thorough investigation and prosecution – to entirely upset the country’s current political order, which has already been convulsed by the rise to power of recently released convict Sadyr Japarov. Matraimov is widely believed to have sponsored allies in the ruling elite and his removal from the scene would signal a major shift.

Claims that Matraimov, mockingly nicknamed “Rayim Million” for his reputed wealth, has been involved in sweeping levels of corruption have been levelled to date mostly by independent journalists and anti-graft activists. According to one series of journalistic investigations, Matraimov is said to have siphoned off up to $700 million. But under the recently deposed President Sooronbai Jeenbekov, investigators undertook no real measures to look into those allegations.

Upon seizing all levers of power earlier this month, Japarov, who is currently serving as both prime minister and acting president, issued a series of populist pledges that included stamping out corruption. These had been received with skepticism, however, in view of his own alleged, if undocumented, links to organized crime.

Speaking in an interview to Al Jazeera television station, Japarov dismissed talks of his ties to the criminal world.

“They said that I am backed by criminals,” he said in the interview aired on October 19. “They are spreading rumors. They just want to turn people against me. These are just words. I have nothing to do with crime. On the contrary, I will rid the state of crime, I will do my best to turn [Kyrgyzstan] into a clean and developed country.”

The security services, popularly known by the Russian-language acronym GKNB, has sought to bolster that defense by announcing that they were at long last opening an investigation into Matraimov. On October 19, the GKNB announced that they had identified about 40 people involved in corruption inside Matraimov’s inner circle.

“At this time, the whereabouts of these persons are known. Work is underway to establish their involvement in this corruption,” the GKNB said in a statement preceding Matraimov’s arrest.

All signs point to Matraimov having acquiesced to his own arrest. After many months of total absence from the scene, he turned up outside GKNB premises together with his lawyer.

The GKNB later in the day issued a fresh statement to say that Matraimov had expressed readiness to pay the state an amount of 2 billion som ($24.5 million) in compensation for damage caused through his activities to the country’s coffers. A first payment of 80 million som has already reportedly been deposited into a GKNB bank account.

It was unclear as of October 20 what further procedures Matraimov might face down the road.

There is a tortuous political tale leading up to Matraimov’s apparent downfall. The former customs kingpin was fired in late 2017 from his job as deputy head of the Customs Service by then-Prime Minister Sapar Isakov, a close confidante and ally of ex-President Almazbek Atambayev.

That dismissal occurred just as Atambayev was handing over the reins to his handpicked successor, Jeenbekov. But the tables turned dramatically in the months that followed.

As Jeenbekov bristled at his mentor’s behind-the-scenes meddling, Isakov was arrested on corruption charges in the summer of 2018. An enraged Atambayev claimed in a statement after that that the criminal charges against Isakov, as well as against a fired head of the customs service, Kubanychbek Kulmatov, was “revenge being meted out by the friends and patrons of the famous Rayim Million, whose dismissal led to positive changes and a sharp increase in customs revenues.”

His protestations were of no use. The following year, Atambayev was himself stripped of immunity by a compliant parliament, after which he was arrested and charged on multiple counts.

In May 2019, while that sequence of events was playing out, Matraimov emerged from the shadows to warn a now fatally enfeebled Atambayev, who had been speaking volubly about how Jeenbekov was in hock to the ex-customs chief, that he “had the strength” for a protracted duel.

So it was that in the run-up to the October 4 parliamentary elections, Matraimov appeared entirely unassailable. His most visible enemies had been vanquished and the government had long stopped pretending it intended to move against him.

In apparent determination to consolidate and formalize his influence, he is said to have lavishly funded the electoral campaign of at least one, if not several more, political parties. If all had gone according to plan, Mekenim Kyrgyzstan would, along with the Birimdik party associated with President Jeenbekov, have secured a commanding majority of seats in parliament. Almost all credibly anti-government parties were locked out of the legislature as a result of a vote marred by accusations of vote-buying on a colossal scale.

An initially peaceful October 5 protest rally against the outcome of the election spiraled first into a night of rioting, which culminated with mobs seizing the White House parliament and presidential administration building, and then into days of political turbulence. After much jostling among contenders to take over the reins of government, Japarov came out on top.

The rise of Japarov, a one-time MP who was serving a prison sentence on kidnapping charges until his release on the night of October 5, has troubled many for how it arrived on the back of the intimidation and violence deployed by large crowds of his fanatical followers.

A turn toward combating the shadier legacies of individuals like Matraimov may prove a valuable sop to those concerned skeptics. This will only be the case, however, if the arrest of Matraimov is succeeded by a credible investigation and, more importantly, if it proves to be the initial salvo of a wider war on the influence of illicit funds on Kyrgyz political life. Japarov will need to do much more to convince his detractors on this last point.

This article was updated to reflect Matraimov paying compensation to the GKNB.