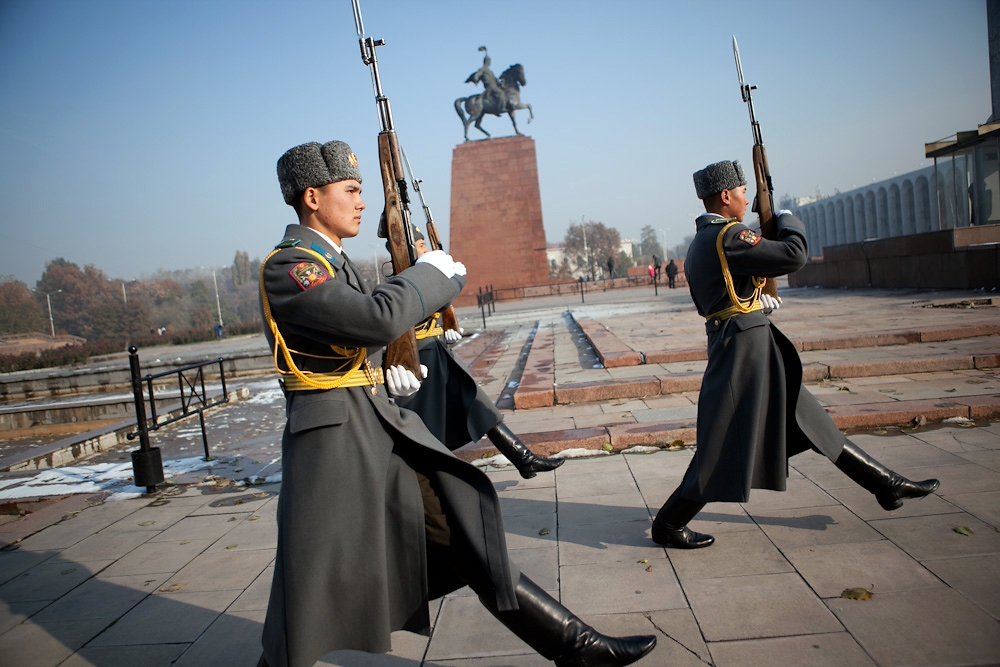 Kyrgyzstan is a few steps away from a new law requiring all government documents to appear only in Kyrgyz. (Photo: David Trilling)

In a small room with two desks and three chairs it is surprisingly easy to lose Ismayil Kadyrov. But he’s there, behind a tall pile of papers, correcting another document translated from Russian to Kyrgyz. “At every step I come across incorrectly translated documents,” he says. “We don’t have enough time, we work days and nights!” Pointing at a paper covered in red ink marks, he sighs. “I’ve seen worse.”

Kadyrov’s job is to edit all the Kyrgyz-language documents arriving at government headquarters from Kyrgyzstan’s various ministries and state agencies. “Incompetent translations” from Russian into Kyrgyz are the rule rather than the exception, he says.

A draft bill that would make Kadyrov’s job harder, requiring all government documents appear only in Kyrgyz, is up for a vote on its second reading in Kyrgyzstan’s parliament on March 28. (All legislation must pass three readings before it heads to the president to be signed into law. The first reading passed 84 to 12 in December.)

The bill would require all civil servants to pass a Kyrgyz-language exam and impose fines for those who slip into Russian in official meetings; documents will appear in Russian only under special, yet-to-be-defined circumstances. It remains unclear how the fines – ranging from approximately $20 to $420 – will be assessed and who will be authorized to monitor implementation of the law.

In Kyrgyzstan, home to more than 70 ethnicities, bilingualism is a legacy of the Soviet past. Ethnic Kyrgyz account for 72 percent of the population, according to the 2009 nationwide census, the most recent. But many of the country’s best educated – regardless of ethnicity – speak Russian as their first language; some Kyrgyz do not speak Kyrgyz at all. While Kyrgyz is the country’s “state” language, Russian, its “official” language, serves as a de facto medium of interethnic communication.

In recent years, lawmakers have engaged in bitter arguments about which language to speak at parliamentary sessions. Champions of the bill find supporters among the rural, Kyrgyz-speaking Kyrgyz who have flooded into Bishkek as more educated people leave the impoverished country. Arguments for speaking Kyrgyz are framed in terms of “honor” and “dignity” and the legacy of colonialism; in this view, Russian is the alien import of a now-distant imperial power, not a tool for getting ahead.

President Almazbek Atambayev appears to have thrown his support behind the bill. "Whether or not someone likes it, we should promote the state language. One should learn the language, not seek excuses not to learn it," 24.kg quoted him as saying on March 18, responding to criticism about the bill. "We will not be under the chauvinists' thumb: We should know the state language.”

Prominent rights activist Cholpon Jakupova fears the forced switch will create a mess of ambiguous and imprecise legal documents. “If they want to write laws in Kyrgyz, let them try. Let them write the Criminal Code in Kyrgyz, and see if anyone will be able to understand it. Not only are lawmakers unable to write in Kyrgyz, they are unable even to read the laws, that’s the problem,” Jakupova, director of the Adilet legal clinic, told Fergana News shortly after the first reading.

While the debate rages, little is being done to facilitate a transition, says Kadyrov, the editor. No ministry or government agency has translated its bylaws and other essential documents entirely into Kyrgyz, he says.

Dastan Bekeshev, a parliamentary deputy, supports the idea of promoting the Kyrgyz language, but says he is against using force. (Bekeshev was absent during the vote on the first reading.) A language-proficiency test is a “way to get rid of unwanted people. Inserting this kind of system is complicated and incorrect,” he told EurasiaNet.org. “We can all speak Kyrgyz, but to do office work [in Kyrgyz] is a different thing.”

Comments like Bekeshev’s draw venomous responses in some of the nationalist-leaning Kyrgyz newspapers. Addressing parliament, an editorial in the Alibi weekly on March 20 asked, “Who are you, deputies or enemies that defend personal interests while trampling the dignity of the Kyrgyz people and denigrating the Kyrgyz language?”

Still, civil society activists fear the legislation violates minorities’ constitutional rights and point out that the education system is hardly equipped to teach Kyrgyz properly, meaning children in non-Kyrgyz-speaking families are at a disadvantage.

In an interview with EurasiaNet.org, Almaz Esengeldiev, an advisor at Freedom House, a US-based watchdog, called the bill “discriminatory.”

“Unfortunately, nationalist sentiments are growing. I’d like to see the state supporting internationalism rather than nationalism,” he said. “This is simply going overboard.”

Esengeldiev fears such an “incautious” move may increase the exodus of minorities and the Russian-speaking educated elite. “We need to create conditions for learning the language instead of trying to insert it artificially. We need to create market demand. When a person realizes that his knowledge of the language helps improve his situation, he will have the desire to learn it.”