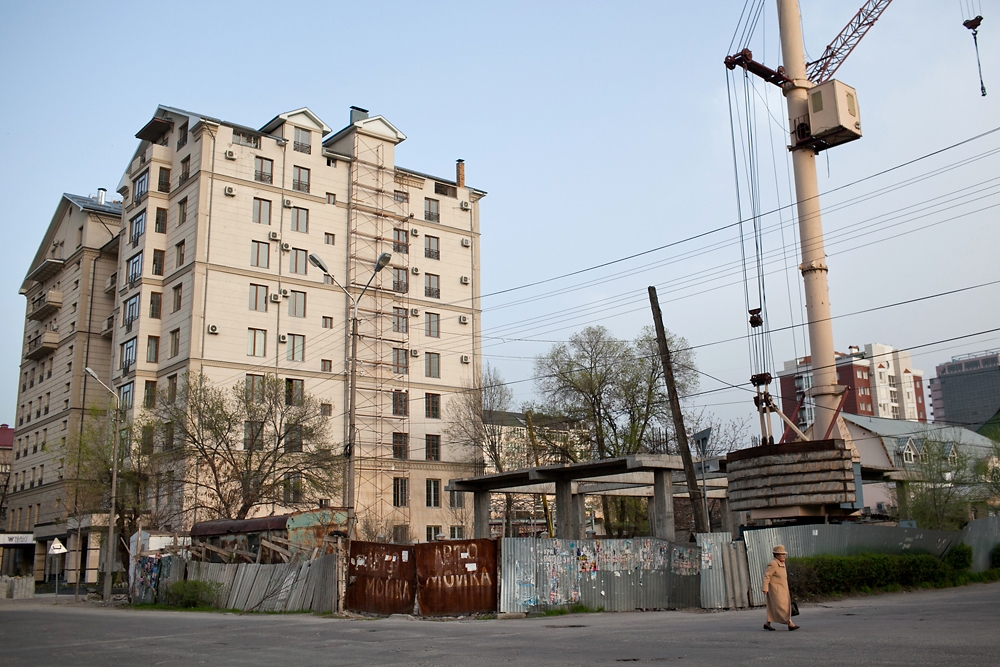 Glance at the parking lot outside parliament, at the fleet of Lexus SUVs kitted out with chrome, and you might think Bishkek is the capital of a wealthy country. A block down Chui Avenue, a shiny new Range Rover is parked on the sidewalk. Police drive their own BMWs.

Look a little closer, though, and the real Kyrgyzstan comes into focus.

In the shadow of the hulking White House – as the parliament building is known – Enjegul Kydyralieva, 50, sells lollipops and nuts from a blanket spread on the ground. On a good day, she clears about 250 soms ($5.20). “One hundred percent” of that – after she subtracts 50 cents for daily transportation to and from her village 45 minutes away – goes to feeding three children and three grandchildren, including the four-year-old she’s babysitting on the curb.

“If anyone gets sick we try to save money to buy medicine,” Kydyralieva says as the steel gate opens and another shiny new SUV glides past. “It’s not fair. They drive around with these cars that cost thousands of dollars and we are here working all day to earn a few hundred soms. Plus, they try to chase us away.”

Bishkek today is a city of striking contrasts. The luxury cars – and their tendency to run red lights with impunity – are just one expression of the disparity. “Elite” apartment blocks, where units cost hundreds of thousands of dollars, are mushrooming in central districts. Billboards announce the latest new nightclubs. At a new Turkish-built shopping mall, a pair of Italian loafers costs the equivalent of Kyrgyzstan’s average monthly income.

This is one of the poorest countries in Asia. But it’s not only underemployed grandmothers who struggle.

An engineering lecturer with a doctorate, single mother Elmira Ismailova, 46, earns about 7,000 soms a month ($145). She spends 70 percent of her salary on food, but considers herself lucky, because her parents help with 3,000 to 4,000 soms per month. “If I didn't have their support, I wouldn't call myself middle class. My salary is never enough. If I want to go out somewhere, like a restaurant, I have to save money in advance,” she says.

Many Kyrgyz struggle to put food on the table. An April study by the World Food Program, a UN agency, found the average price of wheat flour 42 percent higher than a year ago. The same report estimated that 24 percent of Kyrgyz households were not meeting basic nutrition and calorie requirements. This is partially due to a poor harvest in 2012, high prices for fuel, inflation, and Kyrgyzstan’s overall isolation.

“Kyrgyzstan does not have a middle class. There are poor people and there’s a rich elite, which is maybe 5 to 10 percent of society,” explained Pavel Dyatlenko of Polis-Asia, a think-tank in Bishkek.

Those in the elite are doing well. One indicator is the building boom currently transforming Bishkek’s skyline. Kyrgyzstan’s construction sector grew by 17.3 percent in 2012, the Asian Development Bank says.

There are several common explanations for all the construction: A more liberal economy since 2010, when protestors chased the venal and nepotistic president out of office; the laundering of the vast quantities of Afghan drug money moving through Kyrgyzstan; and the relative absence of alternative investment opportunities.

Dyatlenko, the analyst, endorses all of the above. Moreover, paradoxically, Kyrgyzstan’s chronic instability also fuels the construction craze, he says. “Since we have many holes in our laws, unoccupied land can be seized. With all these [political] transitions, the situation is very unstable. If you have a building [on your land], it’s more difficult to confiscate,” Dyatlenko told EurasiaNet.org.

While Dyatlenko’s explanation makes sense within the Kyrgyz context, bad times aren’t all good for the construction sector. Kyrgyzstan is covered with the skeletons of abandoned projects. And just last week, protests again swept Kyrgyzstan, starting with a demonstration outside the Canadian-run Kumtor gold mine in Issyk-Kul province. There, protestors demanded greater social benefits from the lucrative mine. Kumtor executives responded that they pay millions of dollars into a social fund for the province. Privately, however, they admit they can’t stop local politicians from misappropriating the funds.

Kyrgyzstan is certainly not the only country where a growing economy appears to widen social divisions. But with rampant corruption and authorities unable – or unwilling – to enforce the rule of law, many feel the divisions are getting starker.

Across from parliament, on the opposite side of Ala-Too Square, Anar Subankulova, who looks 75 but is 54, sells gum, single cigarettes, and kurut—dried yogurt balls that taste a bit like Parmesan cheese. Subankulova spends 4,200 soms ($87) per month on rent and utilities for the small apartment she shares with her grandchildren. She earns about 300 soms a day. “It’s torture because this is never enough.”

Asked if the 2010 “April Revolution” changed anything, she breaks into tears and says she doesn’t want to talk about it.