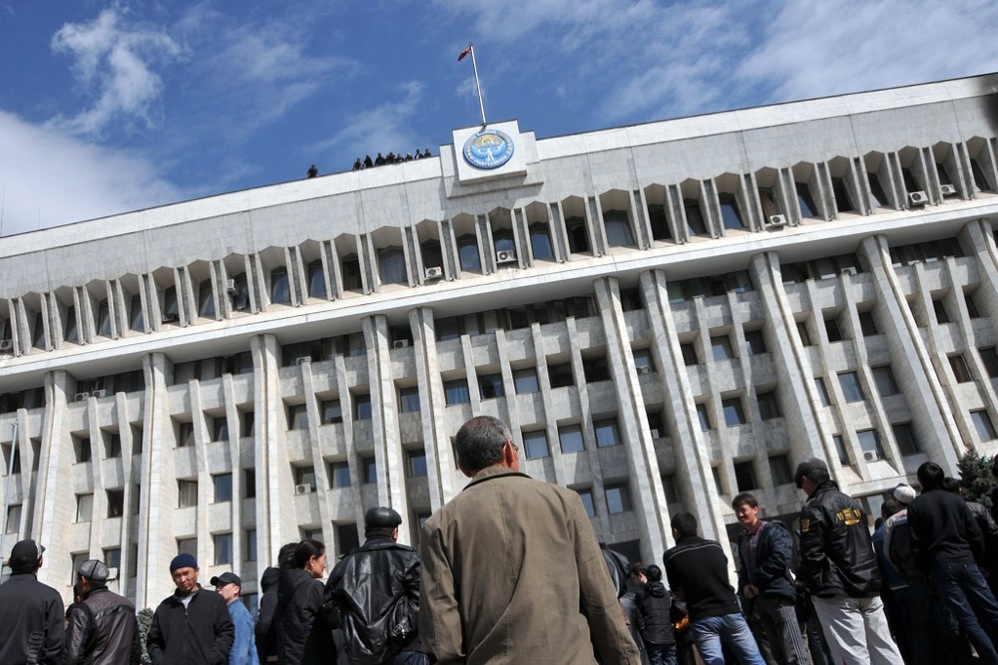 Bishkek is mostly calm but uneasy a day after mass riots and looting toppled the government of Kurmanbek Bakiyev. A new government has formed, but has been slow to consolidate order.

The new acting prime minister, former Foreign Minister Roza Otunbayeva, held a press conference on April 8 at the parliament building where she disbanded parliament, formed a new government, and expressed gratitude to Russia for supporting the opposition with statements yesterday. [For background, see the Eurasia Insight archive].

Bakiyev has not resigned and is in his home region of Jalalabad, said Otunbayeva, who served as a former ambassador to the United States and United Kingdom. "We will negotiate with him only on his resignation. His business in Kyrgyzstan is finished," she said, promising the new government "will not make old mistakes anymore."

"Kurmanbek Bakiyev was in Osh yesterday and today he is in Jalalabad. We heard he is trying to raise people against the people's will here. He is trying to raise the electorate in the south," she said. Former Prime Minster Daniyar Usenov is in Bishkek, she added, without elaborating.

Former Defense Minister Ismail Isakov, jailed by Bakiyev on trumped-up corruption charges and released yesterday, was appointed defense minister once again. The opposition block is in control of the police and security forces, he said. "Today all of the special forces, military and border services are protecting our national security. ... As minister of defense, I talked to all of the commanders and all of them are on our side."

Otunbayeva also abolished the unpopular utility hike that had provided major impetus for protests over the past few months. Temir Sariev, acting as finance minister, announced he would nationalize several banks believed to be connected to the Bakiyev family.

A block from the press conference, several thousand people milled nervously about the White House grounds while smoke rose from parts of the building. The building fell to opposition forces after heavy fighting late April 7. [Eurasia Insight slideshow: Kyrgyzstan: Unrest Engulfs Bishkek]. It was unclear how much control Otunbayeva's new government had over the city. Swarming masses of demonstrators wanted to loot the building, it appeared, while others were trying to maintain control.

"I think this is crazy," one bystander said, appealing for calm. "There is no opposition here; just masses of people." [For details, see the Eurasia Insight archive].

One group of demonstrators, setting up yurts in the adjacent Ala-Too Square, told EurasiaNet.org that they did not believe the opposition, consisting of former government officials, would change anything.

A block away, families were strolling with their children to assess the damage and stores were starting to reopen by early afternoon.

In Osh, the central city in southern Kyrgyzstan, approximately 2,000 demonstrators gathered opposite the provincial administration building and appointed Asylbek Jeenbekov, a member of parliament from the opposition Social Democratic Party, as the new governor. There were no reports of violence. Former Governor Mamsadyk Bakirov resigned before the crowd and left the building. Eyewitnesses say the mayor, who is considered close to Bakiyev, came to the square with his bodyguards and announced he was joining the protestors before quickly leaving.

One western diplomat predicted a difficult struggle in the southern capital. The mayor is powerful, the diplomatic source said, and won't go down with out a fight.

Osh is currently quiet, though residents are nervous about rumors Bakiyev will try to stage resistance in the south. Many shops are open.

Survivors of both the so-called March 2005 Tulip Revolution, and Kyrgyzstanâs latest political crisis, say there has been far less looting in Bishkek this time around. [ For details, see theKyrgyzstan: Revolution Revisited timeline ].

"This time there was less looting because people were psychologically ready and business owners knew what to expect. Yesterday afternoon, shop owners were taking their products from their stores. In 2005, some stores tried to use armed guards. That didn't work. Shop owners this time were prepared with metal gates and shields over windows and doors, which were more effective," said one witness to both revolutions.

David Trilling is the Central Asia news editor for EurasiaNet.org.