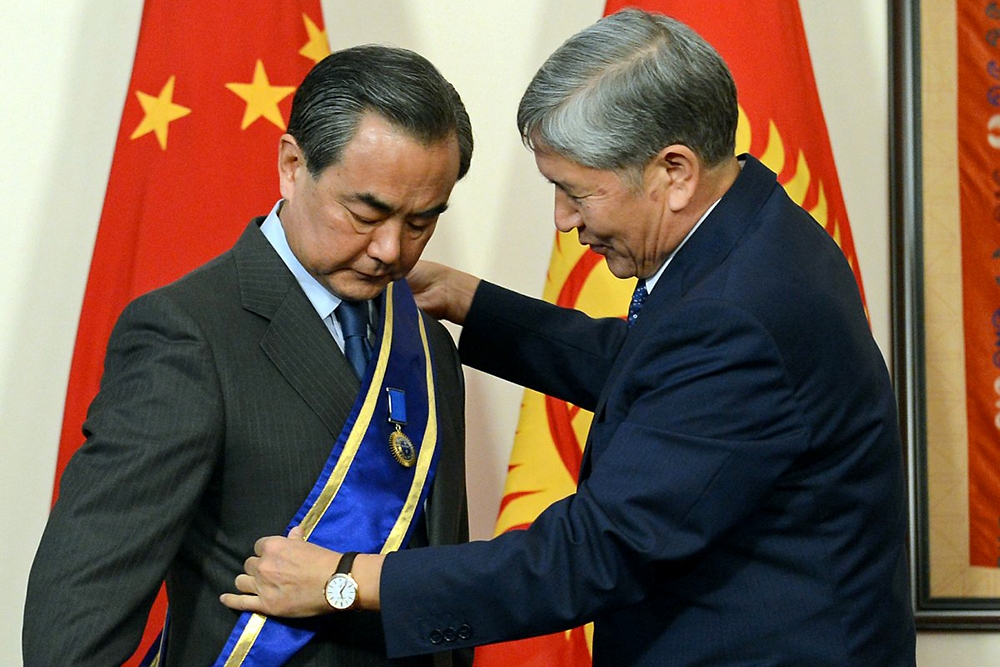 Kyrgyzstani President Almazbek Atambayev (right) awards Chinese Foreign Minister Wang Yi the Kyrgyz order of Danaker on May for his “great contribution to the development of cooperation” between the two countries. After Kyrgyzstan joined the Eurasian Economic Union trade bloc, government statistics show a 29 percent decrease in imports from China from $1.45 billion in 2013 to $1.03 billion in 2015. (Photo: Kyrgyzstan Presidential Press Service)

Third in a Five-Part Series

Why, Foreign Minister Wang Yi was asked by Kyrgyz economic officials during his visit to Bishkek on May 22, did Beijing not consider relocating 40 or so manufacturing operations from China to Kyrgyzstan?

Economy Ministry officials cast the proposal as a win-win, reasoning that China would gain an important manufacturing base in Kyrgyzstan, while the Central Asian nation would benefit from the revival of idle industrial capacity. A proposed list of vacant facilities included silicon and antimony processing plants, a light bulb factory in Mailuu-Suu, two distilleries in Karakol and Kara-Balta, and cotton and textile production lines in the south.

Chinese officials have not yet gotten back to their Kyrgyz counterparts with an answer.

The key factor underpinning this extravagant suggestion is Kyrgyzstan’s accession last year to the Russian-led Eurasian Economic Union trade bloc, a development that erected a big barrier to the importation of Chinese goods. Kyrgyz government statistics show a 29 percent decrease in imports from China from $1.45 billion in 2013 to $1.03 billion in 2015.

“When Kyrgyzstan was not part of the EEU, China profited more from selling goods to Kyrgyzstan since we re-exported goods and trade was a priority. Nowadays [Chinese businessmen] see that the situation has changed and that it is more beneficial to produce or assemble goods, so they focus on this,” Shumkarbek Adilbek uulu, deputy director of the Economy Ministry’s Investment Promotion Agency, told EurasiaNet.org.

To date, the main dividend of Kyrgyzstan’s economic ties with their giant eastern neighbor has depended on trade. Dordoi, a sprawling market outside Kyrgyzstan’s capital, prospered in the post-independence period from the re-export of affordable Chinese wares. Kyrgyzstan’s membership in the World Trade Organization from 1998 onward ensured that merchants profited from low customs tariffs on imported goods.

A Chinese entrepreneur, who asked to be identified only by her adopted local name, Medina, sells bath mats and other items at Zhonghai, a Chinese-run bazaar that is next to, but considered separate from, Dordoi proper. Since EEU membership, Medina has had to radically revise her business model.

Instead of bringing goods directly to Kyrgyzstan across the border in the southeastern Naryn region, it is more worthwhile for Medina to bring in items by railway from China to Kazakhstan through the Khorgos free economic zone. Even that has not been enough, however, and Medina is importing half of the amount that she used to. If things do not pick up, she might be forced to leave Kyrgyzstan altogether, she said.

But news within the EEU is hardly much better. Entrepreneurs say customs bureaucracy and the devalued currencies of fellow bloc members, especially Russia and Kazakhstan, have combined to weaken export potential.

Aiturgan Zaitova has been selling women’s clothes at Dordoi for more than 10 years, mostly to wholesale purchasers from all across the former Soviet Union. Her cargo container holding rows of “Made in KG” apparel stands largely deserted and only the occasional bored window shopper wanders in to take a glance.

“If you look in my journal, I sold one to five items over the past week. There were some days without any sales at all,” Zaitova said. “In years past, we had wholesale customers from Russia, Kazakhstan, Uzbekistan and even Ukraine. We started working at 6 am and were able to sell almost everything by midday.”

Chinese investment in revitalizing industry would notionally inject energy into this dismal picture. Still, given a legacy of difficulties, officials tread carefully when talking about development joint projects with Beijing.

Many of the troubles are connected to job creation and wages. In the town of Kara-Balta, local residents have protested against the environmental impact of China-backed Zhongda oil refinery when it was under construction in 2013. The refinery was later the object of labor strikes by Kyrgyz workers who demanded equal pay to similarly qualified Chinese staff. The jointly Chinese co-founded Altynken gold mining company, based in the Orlovka village in Chui province, also faced strikes amid demands for higher wages.

One recurring issue is that foreign companies are perceived as not hiring enough local staff. To address that complaint, the National Migration Service has proposed a bill to cap the number of foreign workers in any given Kyrgyz company at 20 percent. Just how such provisions are to be considered by would-be Chinese investors is uncertain.

Svetlana Ryzhova, a cheese seller at a small market in the center of Bishkek, was doubtful Chinese factories could be compelled to hire locally.

“What do Chinese businessmen need the local labor force for? It is easier for them to bring Chinese workers, who speak the same language,” she said. “I think this is more to do with … public officials worried about their own interests rather than the regular people.”

As in other parts of Central Asia, Kyrgyzstan is host to a sometimes creeping, sometimes blatant strain of Sinophobia. On occasion, this bubbles to the surface, as it did in December 2014, when a group of aggressive young men from the self-described national patriotic Kyrk Choro movement raided a private karaoke club. The men, dressed in traditional kalpak felt hats, dragged out the women working there amid accusations of being prostitutes and made a point of manhandling some of the Chinese customers and accusing them of defiling the country’s womanhood.

While the government nurtures hopes of landing Chinese investment, many Kyrgyzstanis are skeptical, and wish instead that Russia might step in.

Newspaper kiosk worker Ertabyldy Mamytov, 66, had a job at an agriculture machinery factory in 1980s, when money from Moscow still flowed into the republic. “It would be better if Russia [moved production to Kyrgyzstan]. We have a long common history with Russia. China, we have already seen how that works. There were strikes in the places with Chinese investments,” Mamytov told EurasiaNet.org. “It would be better with some other investor, but if there is no other option, as long we can revive production, then let it be China.”

Promises of Russian investment have proven illusory. Beijing has on paper shown it is more than capable of filling that gap.

In January, parliament voted overwhelmingly to cancel two key hydropower construction deals with the Russian companies leading the projects, citing lack of progress in work. And then Kyrgyz deputy Prime Minister Oleg Pankratov met with a delegation from China’s State Power Investment Corporation on April 6 to discuss plans to build a cascade of four hydropower stations on the Naryn River. The proposed cascade would generate around 4.6 billion kilowatt hours of power annually — more than either of the now-scotched Russian projects, and equal to current output at the country’s biggest dam, Toktogul hydropower station.

Gulnur Chekirova, a research analyst at Bishkek-based BizExpert consulting company, said China’s activities in Kyrgyzstan need to be seen as part of the Belt and Road initiative — a network of multi-continent logistical projects intended to help Beijing project its economic clout.

“China invests in the economies of its partners, pursuing economic and not political goals, as they put it. China does not necessarily invest in something that brings financial profitability. It is more to do with their strategic vision. As I understand it, they invest into infrastructure and support the countries they are interested in so as to secure long-term relationship,” Chekirova told EurasiaNet.org.

Chekirova said China is especially interested in Kyrgyzstan as a viable market in itself, but rather as a transit country to other regions. “If they are interested in hydropower facilities, they will be able to profit from power export to South Asia, which will be ensured by the Datka-Kemin power lines — also funded by China,” she said.