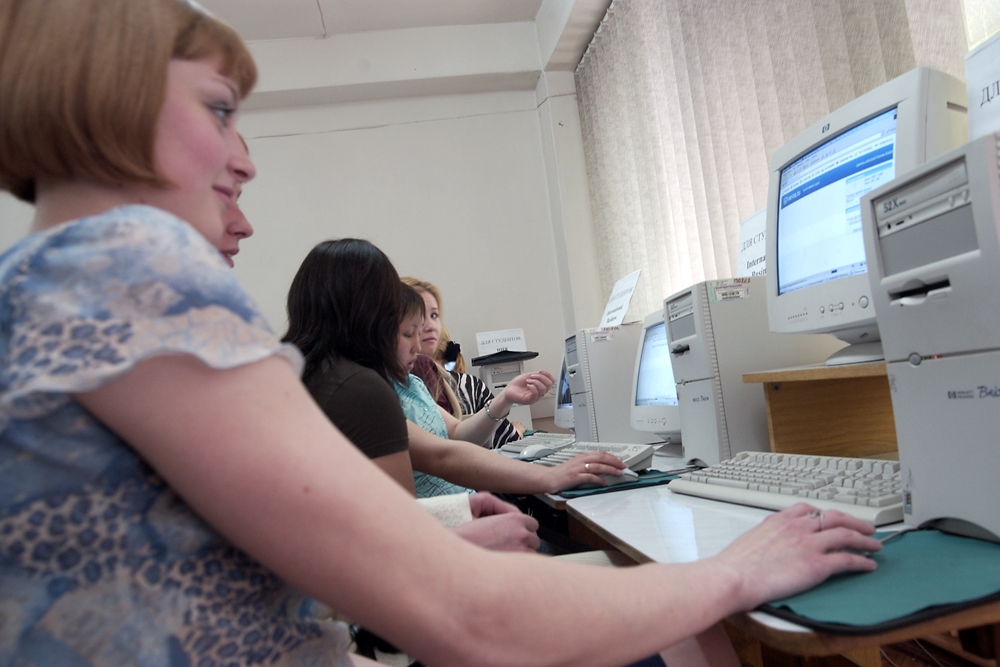 Computer-technology departments at state universities in Kyrgyzstan are underfunded and woefully out of tune with the global tech market. (Photo: Dean C.K. Cox)

The Bishkek office that website developer Mikhail Ageev shares with three colleagues – a line of tables facing out over the city panorama, where each hunches over a laptop – is so minimalist it looks like it could be abandoned at a moment's notice. “People in our line of work often talk about leaving [Kyrgyzstan],” said Ageev. “But for the moment, most of our clients are here, and so we are still here.”

Techies in Kyrgyzstan, Ageev says, often feel limited connections to home. Mostly they are self-taught, because computer-technology departments at state universities are underfunded and woefully out of tune with the global tech market. And though the average starting salary is considered very good for Kyrgyzstan at about $600 per month, exciting tales of Kyrgyz developers making big money abroad float often through the community. Authorities sometimes talk about inspiring information and communications technology (ICT) experts to stay in Kyrgyzstan, but there appears to be little strategy and some serious handicaps.

Aziz Soltobaev, founder of Svetofor.kg, an online delivery service similar to Amazon that works in Kyrgyzstan and Kazakhstan, says the government needs to focus on improving infrastructure for hi-speed Internet before the sector can expand and attract foreign investment. “We are a small country and we need to have good connection speeds everywhere for the industry to really grow. [Outside Bishkek] connection speeds average 512 kilobytes per second. For 2014, that is pretty disgusting,” Soltobaev told EurasiaNet.org. According to Ookla, a website that measures Internet speeds around the world, average Kazakh connections are at least twice as fast as the fastest Kyrgyz connections. (Kyrgyzstan now places third for speed in Central Asia, according to Ookla; in 2010 it was first.)

A planned high-speed Internet link connecting China’s Xinjiang Province to Osh in southern Kyrgyzstan has failed to materialize, Soltobaev notes, while this winter authorities will struggle to keep the electricity on. “The government still cannot tell me what kind of shutoffs there will be and how long they will last,” he complained.

The government has mostly been passive toward the ICT sector, insiders complain. Under President Askar Akayev, the country developed a National Strategy on Information Technologies in 2002 with the aim of catching up to more rapidly developing economies in terms of bandwidth and Internet speed by 2010. But Akayev’s government collapsed in 2005 and subsequent administrations have not taken up the baton.

Parliament did pass a law in 2011 enabling the creation of a high-tech park – a network of programmers and developers working under a favorable tax regime, often with clients in the richer markets of Kazakhstan and Russia. The park’s motto is “Live in Kyrgyzstan, work across the world!” But of the 30 members of the Kyrgyz Association of Software Development and Services, a lobby representing the country’s significant IT companies, only six have joined the park since it started working last year.

Azis Abakirov, who chairs the Association and lobbied for the park’s creation, believes it may one day be a hub for much-needed foreign investment. “When I said I wanted [the park] to have a turnover of $4 billion with 50,000 people working there by 2030, people laughed at us. But you have to have a goal,” said Abakirov. His own company, Unique Technologies, creates tools for business-to-business (B2B) communications and has staff in Almaty, St. Petersburg, Tokyo and Bishkek, he says. But it does not work in the park.

“We would like to make our Bishkek office the main office,” said Abakirov. But a higher concentration of clients in Kazakhstan forces him to spend more time in Almaty.

As the industry struggles at home, some Kyrgyzstan-born developers have made names for themselves abroad. Tilek Mamutov is a program manager at Google in California and something of an idol in Bishkek’s techie circles. Many of Abakirov’s former employees have found work in Europe, he says. London-based Erkin Adylov founded Behavox, a company creating surveillance systems for clients in the financial sector. Kyrgyzstan “did not really contribute to my success,” Adylov told EurasiaNet.org by telephone.

Although some brain drain is inevitable – “there are a lot of advantages to living and working somewhere more secure and prosperous than Kyrgyzstan,” said Ageev, the website developer – there is still a niche for more routine ICT work. “We have companies that bug test online games and software for big Russian outfits like Mail.ru. Things like that and call centers. We could begin this way,” Soltobaev said.

Most industry experts agree that the key to creating any sort of self-sustaining ICT industry is education. Unlike Armenia – where a deep-pocketed diaspora has invested millions in ICT education projects such as the youth-focused Tumo Center for Creative Technologies – no one seems to be queuing to invest in Kyrgyzstan.

Abakirov is envious of Armenia and has ambitions to build a technology-focused university of his own in Kyrgyzstan in the future, but admits that such a “dream” would require massive funding. “For a landlocked country, the Internet can be a sea,” he mused. “But we need to figure out how to use that sea.”