President Japarov says Kyrgyzstan is poised to receive far more disputed land than it will give away. 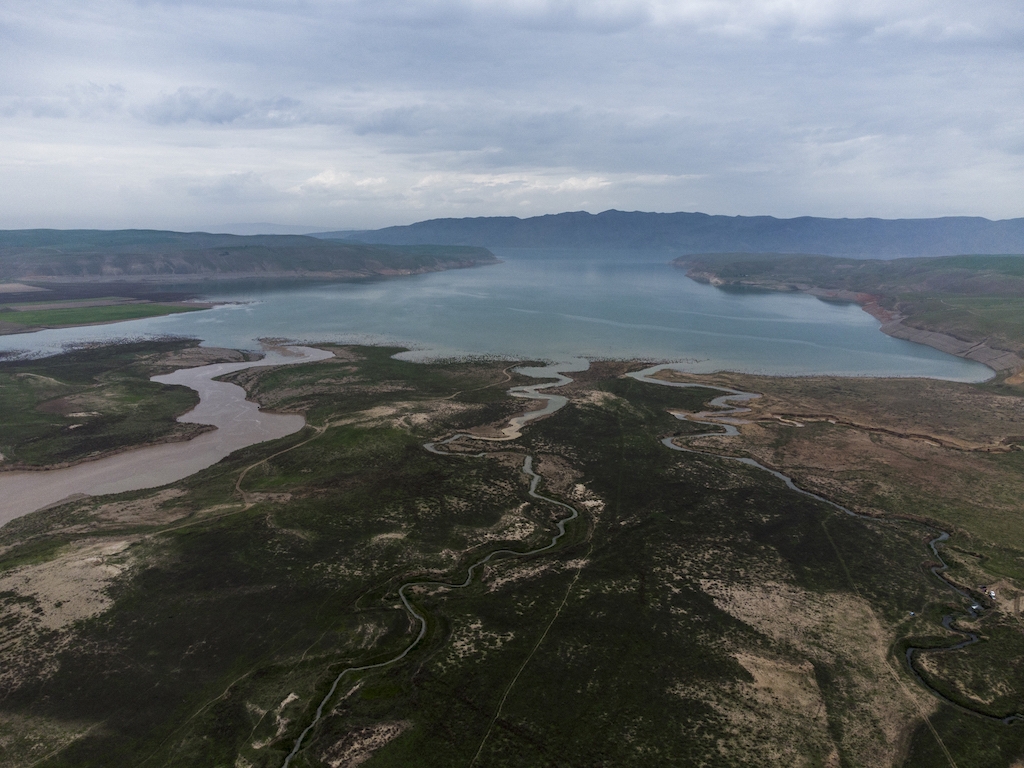 Lawmakers in Kyrgyzstan are being pressed by the government to quickly ratify a border demarcation agreement with Uzbekistan that is provoking mounting anger and frustration among the public.

President Sadyr Japarov, a politician whose fortunes are founded to a great extent on his nationalist appeal, has hailed the deal as a triumph that will see Kyrgyzstan cede less land to its neighbor than it is due to receive.

Critics have complained, however, that control over an important reservoir is being relinquished, and that this idea was hatched without proper public consultation.

The haste with which the ratification process is being pursued is not inspiring confidence.

When an international affairs and defense committee in the Jogorku Kenesh, the legislature, convened to approve the deal on October 10, it was behind closed doors. Only 10 of the committee’s 15 members attended the hearings. In contravention of the rules, lawmakers only got to see a section – not all – of the text of the bilateral protocol on the day of their vote, not three days in advance, as is required by law.

Deputies were similarly not shown auxiliary documentation containing expert assessments on whether the agreement complied with Kyrgyz law.

The head of the committee, Chingiz Aidarbekov, told local news outlet 24.kg that six of the deputies present voted in favor of the agreement and that four voted against.

“Lawmakers didn’t see the documents. I said that until I see the paperwork, I cannot agree to this. So I voted against,” he said.

The document needs to be approved by a plenary session of the Jogorku Kenesh and the president before it can take effect.

The committee hearing was attended by the head of the security services, Kamchybek Tashiyev, who was insistent that the matter had to be dealt with “urgently.” The fast-track process for approving the demarcation accord was, he said, envisioned by a loophole in the constitution.

Tashiyev has played a pivotal role in putting the border demarcation deal together, making his presence at the parliamentary hearing a logical eventuality. Questions have been raised, though, about whether he has sought to cow lawmakers through intimidation in recent weeks.

It has recently emerged that Tashiyev turned up to the parliament building on September 22 with two boxes filled with automatic rifles in a showy attempt to silence deputies who had complained that troops deployed in sensitive areas along the border with Tajikistan’s forces were not sufficiently well-armed.

When pressed to account for the actions of his volatile security services chief, Japarov offered a justification.

“Tashiyev was a little mistaken there. But you have to understand what condition he was in at the time. He had arrived directly from the site of conflict areas and so he gave in somewhat to his emotions,” Japarov was reported as saying.

The clashes to which the president was alluding had occurred one week earlier.

The demarcation deal is being ratified both hastily and secretively. Although Japarov stated on October 9 that ratification should be done openly, the parliamentary hearing on the following day was held behind closed doors. Journalists were not permitted to film proceedings and had their telephones confiscated before entering the hall. Only a cameraman working for Tashiyev’s agency was permitted to film the hearing.

Tashiyev’s justification for this clandestine approach is that parts of the text could be taken out of context by troublemakers and be used to incite public commotion.

“It is so somebody doesn’t go and cut out the bits they need from the draft agreement and protocols that we are signing with Uzbekistan and then give the people incorrect information to whip them up against [the deal],” he said.

Some general points about the agreement are known, however.

Tashiyev said that around 200 square kilometers of heretofore disputed land will be handed to Kyrgyzstan. Meanwhile, Uzbekistan will receive ownership of the Kempir-Abad reservoir, which covers around 45 square kilometers.

Kyrgyzstan and Uzbekistan share 1,400 kilometers of border. Around 15 percent of it is still subject to a definitive agreement. The Kempir-Abad reservoir is only one of nine disputed areas.

Opponents of the proposed swap complain that relinquishing claims to the reservoir could leave nearby Kyrgyz farmers without access to valuable irrigation water. Tashiyev has responded to that by saying that Kyrgyzstan would continue to get unhindered access to water and that the two countries would manage the reservoir’s resources jointly.

Despite those reassurances, there have been shows of discontent. Small rallies took place in Bishkek and in the southern Osh region, where the Kempir-Abad reservoir is situated, on October 10.

A group of elders from the Uzgen district of Osh assembled at the parliament building and demanded to be given an audience with lawmakers. They told reporters that they were not allowed into the building.

“The people have only one demand: We do not want to topple the government, we just want to keep Kempir-Abad,” said one of the men, who said they had been deputized by their fellow villagers to speak on their behalf. “This is our land and water. I don’t understand why they are hiding this document. They aren’t telling the people, and not even lawmakers [have been given the document].”

A larger crowd of around 80 people formed near the Uzgen district administration building. People at that rally complained that Tashiyev had been pressuring lawmakers and that the government was failing to heed the complaints of the public.

“If the authorities do the wrong thing, we will respond in kind. We will take unexpected steps and do unthinkable things,” one speaker said to the vocal approval of his listeners. “You can see, it isn’t only men here, but also women and elderly people.”