Kyrgyz villagers believe Tajikistan is trying to make life so miserable and unbearable that they will up sticks and move away, ultimately ceding the land by default. 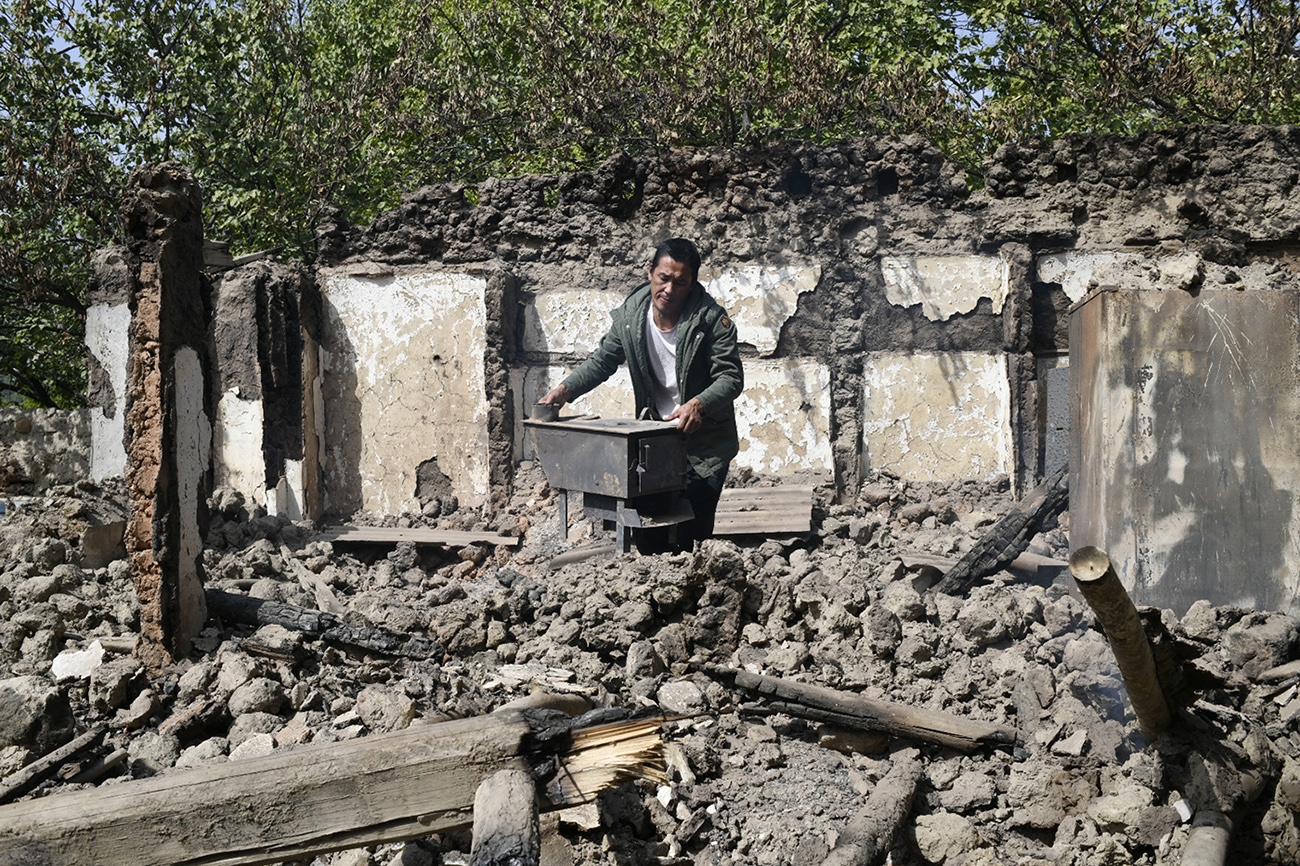 A man sorts through the wreckage of his home in Kapchygai.

Farida Japarova, a 56-year-old resident of Maksat, a village on Kyrgyzstan’s fraught border with Tajikistan, barely had enough time to get used to her new home before it was burned down a second time.

The first time was when mobs of armed Tajik men crossed into Maksat during a frontier conflict in April 2021, sowing destruction in their wake. The funding of a new dwelling for Japarova’s family and many of her neighbors affected by the unrest was provided by Turkey. But then, earlier this month, the same scenes of wanton destruction played out again with unsettling repetitiveness. 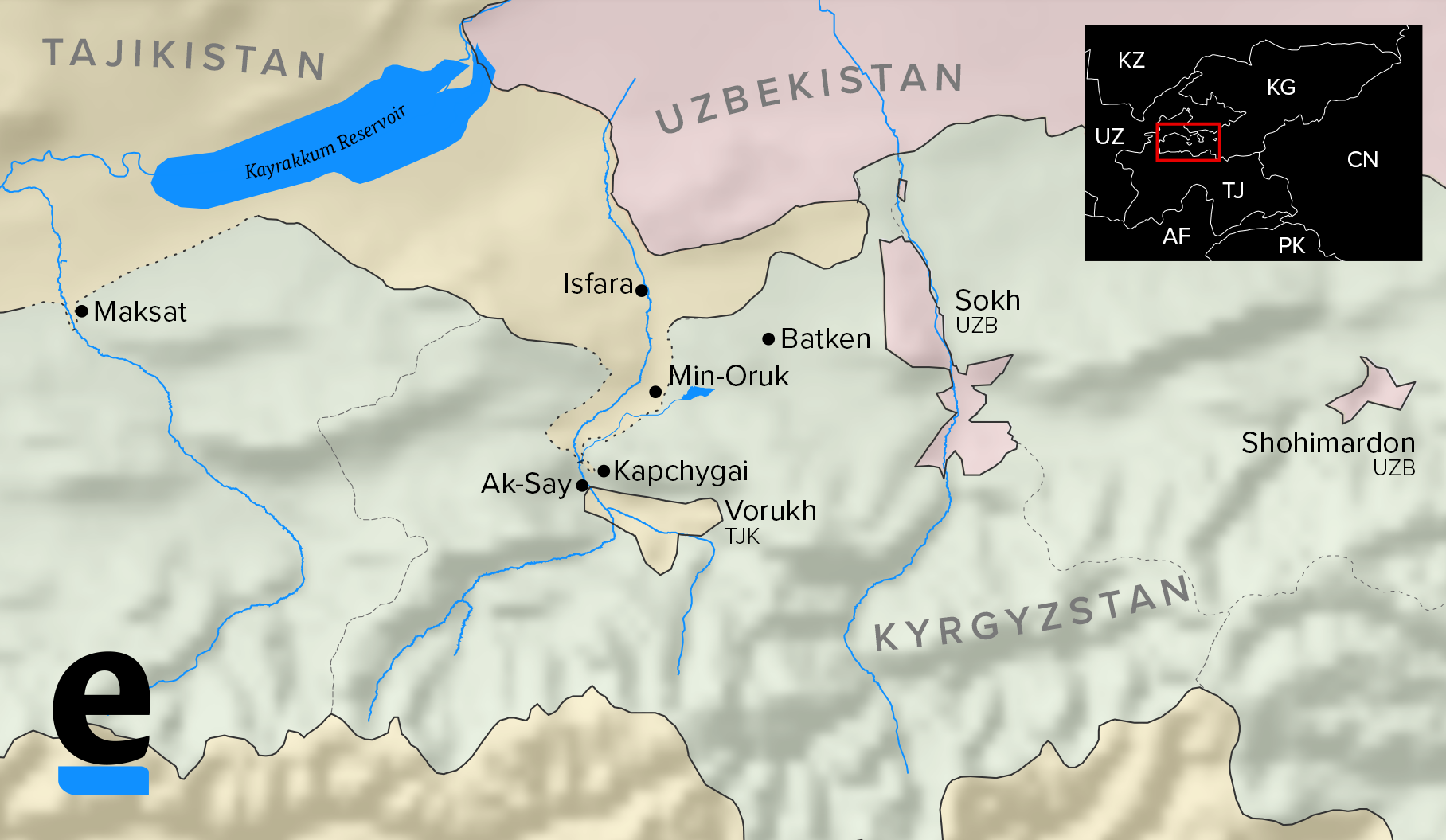 A hard decision now awaits the owners of the more than 600 residential buildings destroyed in Kyrgyzstan in this latest bout of violence: to stay or to leave?

“If the government builds another home for me, I think I will lock it up and relocate to the capital [Bishkek]. It is hard here. A whole family died in the next village along,” said Japarova, who works as a teacher in Kulundu, a short drive from Maksat.

Japarova said she has neighbors who have already committed to abandoning the remains of their homes, some of them handed down to them by parents, and moving to safer areas without waiting to see what financial support the government is prepared to pledge.

Around 80 kilometers to the east of Maksat, in Kapchygai, another village devastated in rampages, 48-year-old Abdyshakur Umarov is of an entirely different frame of mind. He will never leave behind his ancestral land, he said. Almost 100 of the homes burned down were around Umarov’s neighborhood. But housing is the last of his worries.

In the days before he was interviewed, Umarov attended the burial of a relative and of five neighbors. All had been killed at the hands of Tajik attackers, he said, weeping near the charred remains of his home.

And it all could have been avoided if the government had provided villagers with weapons, Umarov insisted.

“Kyrgyz guys should stand up for the Kyrgyz nation,” he sobbed. “I was born here. I will not leave these lands even if it means dying. I will resist to the very end.”

Umarov invokes a widely held belief in explaining what he thinks motivated the attacks on his village, which lies just a short walk away from the Tajik-controlled enclave of Vorukh. The intent is to make life so miserable and unbearable for Kyrgyz villagers that they will up sticks and move away, ultimately ceding the land by default to Tajikistan, he suggested.

To get to Min-Oruk, yet another Kyrgyz village heavily damaged in fighting, it is a roughly half-hour drive north from Kapchygai. The road between the two places skirts settlements inhabited by Tajiks. Exchanges of fire between border troops and clashes among the communities have often broken out along this stretch of land.

Nurzhan Adylbek uulu, 27, a resident of Min-Oruk, is among many to have seen his house go up in flames. The building is now just a roofless shell with windows and supporting frames blackened by fire.

Adylbek uulu shared the house with a wife, a son, and his parents. In fitting with Kyrgyz custom, he was, as the youngest son of the family, to inherit the family home. Marauders carried away everything they could, including three sheep. A wounded calf was left by the burning building.

“We moved here in 1992. Everything we saved up since that time…” Adylbek uulu said, before pausing, choked by emotion. “I worked in Moscow for six years, my brother was there for 10 years. My father used to go there for work when he was young. All these savings have gone up in flames.”

Adylbek uulu has given no serious thought to moving away, however. What he wants to do is make living in Min-Oruk a little safer. That means always having a bag on hand packed with documents and other essentials.

“Perhaps there are some people who want to move, but my family and I have no such thoughts. We were born here, this land is a paradise. It has everything – water and mountains. We cannot give it up,” Adylbek uulu said.

Another villager who spoke to Eurasianet, however, said that not everybody shares this determination. Nursultan Abdirashitov, a 25-year-old soccer coach, said it is plain to him that the authorities are unable to properly defend their citizens.

Speaking for himself, Abdirashitov said he would stay, but he has sent his wife to Bishkek and his mother to Moscow.

“After this war, people have started saying: ‘I am not going to live in this village. I would rather live. I want to see my relatives alive.’ There are already four or five families ready to move now that their homes have been destroyed,” Abdirashitov said. “And we all have the thought that we’ve been abandoned here. When the Tajiks came, we didn’t have any weapons, and the soldiers arrived late.”

While some are fueled in their bullish talk by pride and patriotism, the most downcast residents of cross-border villages point to the objective difficulty of living in an area that was already blighted by a lack of economic opportunities, even before the unrest swept through. Every third person in Kyrgyzstan’s Batken province, which suffered the brunt of damage, lives under the poverty level. The 50-year-old resident of one border village that lies a literal stone’s throw from a populous Tajik settlement, who spoke to Eurasianet on condition of anonymity, said that the police department and the health clinic where he lives is now gone. The local school, where one of his four children studies, was also partially burned down. Few people in the area have much money to their name – and even if they did, the shops were destroyed and looted in this month’s unrest, so there is nothing to buy until they are restored.

If anything, it is a lack of financial options that is keeping people from leaving, the man said.

“Everyone is thinking of leaving this place, but the problem is that not everyone has the opportunity,” he said. “I don’t know if it’s proper to talk about it. Perhaps this is to the advantage of our neighbors [Tajiks]. Maybe this is their goal – for us to leave here so that they can take over these villages.”