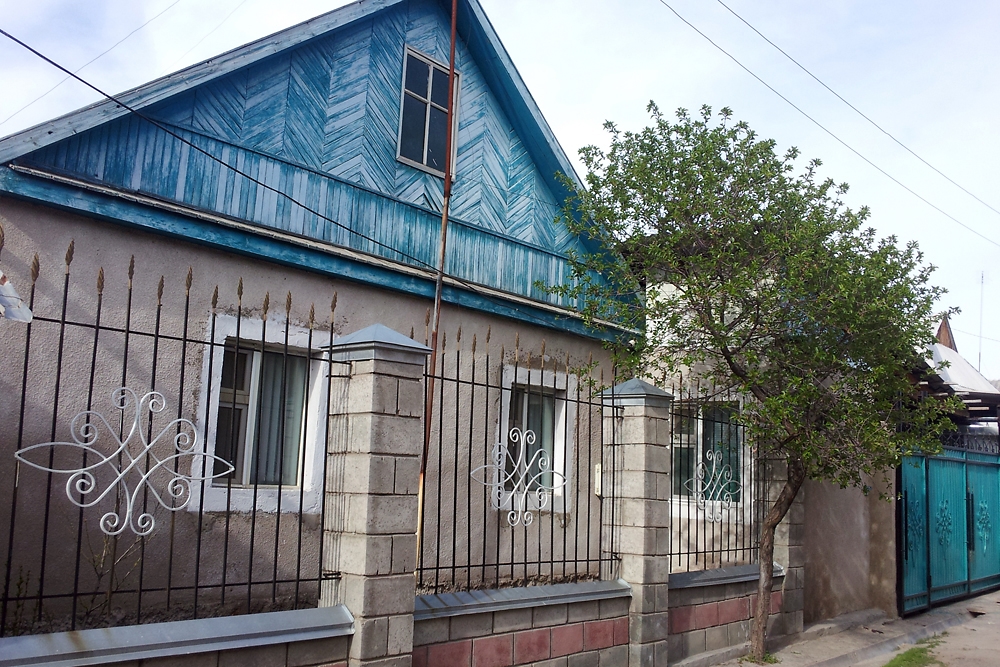 The Tsarnaev family reportedly lived in Tokmok before emigrating to the United States. (Photo: Asel Kalybekova)

Half a world away from Massachusetts, a small town in Kyrgyzstan is reeling from the news that two of its own are suspected of carrying out the Boston Marathon bombings.

News coverage that points to Dzhokhar and Tamerlan Tsarnaev as being the marathon bombers seems to have hit a raw nerve among members of the Chechen Diaspora community in Tokmok, a leafy settlement of about 50,000 an hour by car east of Bishkek. Long subjected to hardship, discrimination and the suspicion of other ethnic groups, many Chechens seem skeptical about the accusations against the Tsarnaevs, especially since the picture of them as terrorists does not square up with the memories of the kids they knew.

Friends and former classmates in Tokmok remember Dzhokhar and Tamerlan Tsarnaev as polite boys and good students – not, as American investigators believe, as Islamist terrorists. The two spent a good part of their formative years in Tokmok.

Badruddin Tsokayev, a 60-year-old pensioner who described himself as a close friend of the Tsarnaev family, said he does not believe the news. “I’m in shock. Never in my life will I believe that they did it. Never in my life,” he said, shaking his head.

Uzbek Aliev, a Chechen community leader in Tokmok, also was incredulous, and, seemingly, in a state of denial. “They would never be able to do such a thing,” he said. “They must have been framed.”

To understand why Chechens in Tokmok would dispute an overwhelming body of video evidence and eyewitness accounts that link the Tsarnaevs to the Boston violence, it’s useful to understand their experience over the past seven decades. It’s an experience characterized by racial profiling in a land where reliable information is not always easy to come by.

Tokmok residents say the Tsarnaevs ended up in Kyrgyzstan in 1944, when Soviet dictator Joseph Stalin deported the entire Chechen nation to the steppes of Central Asia. The rationale behind the deportation was that these mountain people were potential collaborators with Nazi invaders. In Kyrgyzstan, the Chechen community is still concentrated in the fertile Chui Valley, where they arrived during the Second World War. About 20 families remain in Tokmok, in the center of the valley.

After Stalin’s death, the Chechens were allowed to return to the Caucasus. Their numbers in Kyrgyzstan have steadily dwindled since the Soviet Union’s collapse in 1991. According to the 2012 census, Chechens numbered 1,740, down from 2,873 in 1989 and tens of thousands in the 1950s.

The post-Soviet era hasn’t been kind to Chechens in Kyrgyzstan. Amid intensifying competition for dwindling economic opportunities, along with rising social tension, Chechens have often found themselves an ethnic group on the outside looking in. Local Chechens are not eager to discuss discrimination. The leader of the community in Bishkek conceded there is a problem, but that it is small. Yet the diaspora leader complained to the Russian ambassador about ethnically targeted harassment from law enforcement agencies, local news agencies reported in 2003.

For ethnic Chechens, the trouble they have confronted is two-fold: they are a minority perceived as industrious and relatively prosperous in an impoverished country lacking jobs, and, due to the recent conflicts in Chechnya proper, are associated – usually unfairly – throughout the former Soviet Union with violence, terrorism and organized crime. Tsokayev, the family friend who is also an ethnic Chechen, resents the stereotype. “Everywhere, whatever happens, Chechens are criminals, Chechen are terrorists,” he said.

Dzhokhar and Tamerlan’s father, Anzor, was born in Kyrgyzstan. After independence, Anzor led his family from Tokmok to Chechnya, before returning to Kyrgyzstan as the North Caucasus territory became engulfed in separatist and later Islamist-inspired violence, family friends say. A Kyrgyz official told Russia’s state-run RIA Novosti news agency on April 22 that Dzhokhar was born in Kyrgyzstan. The 19-year-old is now under tight guard in a Boston hospital.

In the quiet Tokmok lane where the Tsarnaev family lived in a small stucco home with a blue roof, neighbors remember the family as “close-knit” and “loving.”

“Everyone knew Anzor, and everyone loved him. He did everything for his children, he was a very dedicated father,” says Tsokayev, the pensioner, adding that the family left Kyrgyzstan because Anzor wanted a better future and education for his children.

Anzor -- who trained as a lawyer, and who made a living in the economically depressed 1990s by selling used cars -- wasn’t a religious person, Tsokayev added.

In 2001, the family left Kyrgyzstan for good, briefly stopping in Dagestan – a Russian republic abutting Chechnya – before emigrating to the United States. Simmering Ethnic tensions appeared to play a role in the decision to leave. Resentment against minority groups reached alarming levels in recent years, fueled by perceptions that national minorities in Kyrgyzstan were somehow better off financially than ethnic Kyrgyz, who comprise about 70 percent of the country’s population.

In 2010, as politicized violence gripped the nation, attacks on the Meskhetian Turks – another group deported by Stalin during the war – in the Chui Valley left at least five dead. And that summer, clashes involving Uzbeks and Kyrgyz in southern Kyrgyzstan left over 400 dead, mostly Uzbeks.

Though the Tsarnaev family left long before those episodes, Anzor Tsarnaev is on record as citing systematic discrimination against Chechens as a motivation for his decision to move his family away from Kyrgyzstan. “We left for America because of the political system. The Kyrgyz oppressed us. There was a time when we were hunted,” Anzor Tsarnaev told Russia’s lifenews.ru. “We just wanted to live quietly. I was afraid for my children.”

In the United States, Dzhokhar appeared to be a well-adjusted teenager, and he became a naturalized American citizen last year.

Leila Alieva, the daughter the Tokmok Chechen community leader and currently a 25-year-old high school teacher, was a classmate of Tamerlan’s at the Pushkin School in the Kyrgyz town. When they were teenagers, she and Tamerlan also attended the same after-school music classes, where the boy was learning to play the accordion and his two sisters studied violin. Alieva remembers Tamerlan, who died aged 26 in a firefight with Boston police on April 19, as a kind and positive person. “He always stood out from the crowd. Everyone wanted to be his friend. Even students from senior classes respected him. I still can’t believe what happened,” she says.

Since the news emerged on April 19 that the Tsarnaev family hailed from Kyrgyzstan, authorities in this Central Asian nation have tried to distance themselves from the violence. The State Committee on National Security issued a statement calling it “inappropriate” to link the act to Kyrgyzstan because the suspects left the country when they were aged eight and 15. There is no evidence linking Kyrgyzstan with the violence in Boston.