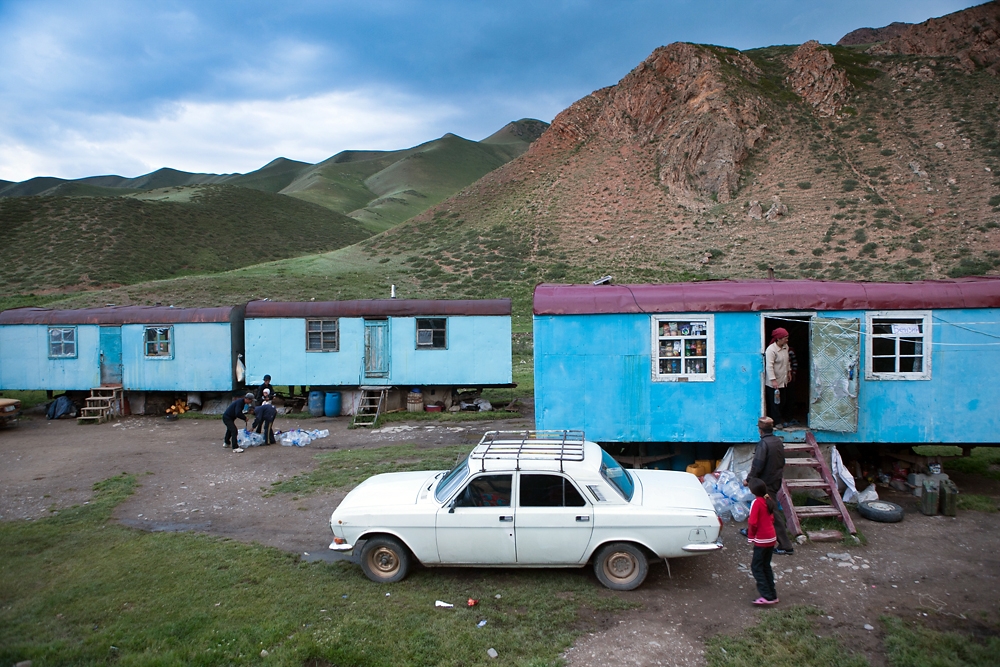 Expected import tariffs would make vehicles from outside the Russia-led Customs Union prohibitively expensive for most Kyrgyz. Many expect Russian cars, such as this aged Volga parked in the Dolon Pass in Naryn Province, to take their place. (Photo: David Trilling)

Taxes are a hot topic of discussion these days for shoppers at Bishkek’s sprawling Azamat car market. The Kyrgyz government is expected to sharply raise import tariffs soon on vehicles to prepare for accession into the Russia-led Customs Union; shoppers fear the new regulations will double the price of the average car within a few years.

“I don’t know why the government is doing it. On the contrary, it should be interested in making our lives more comfortable. What is bad in having a car?” said Bubusayra Shalpykova as she wandered amid thousands of vehicles from Japan, South Korea, Europe and the United States on a scorching summer day. “Why do we need the Customs Union if it means cars will be so much more expensive?”

Kyrgyzstan is expected to join the Russia-led Customs Union by the year’s end. On August 11, Russian Foreign Minister Sergey Lavrov pledged $500 million in aid to ease Kyrgyzstan’s transition, without providing details. Membership requires Bishkek to raise import taxes to comply with the union’s common external tariffs. The Customs Union currently includes Russia, Belarus and Kazakhstan and is due to become the Eurasian Economic Union on January 1.

According to a draft government resolution posted on the Economics Ministry’s website in late July, the tax on imported cars (used and new) would rise incrementally each year for the next five years. For example, for a 10-year-old car with a 2400-cc engine, the Kyrgyz tariff is currently $960. Under the new rules, the import tariff would rise to $1,200 this year, $2,400 next year, and $11,040 by 2019. If the government approves the resolution at a meeting early next month, the new taxes could take effect immediately, according to the Economics Ministry (Parliament is not needed to ratify the rules). Taxes are somewhat lower for newer, cleaner cars, which are more expensive to begin with.

“That means only one thing: Cars will become less accessible to the population at large,” said Andrei Lesnyakov, a dealer at Grand Motors in Bishkek.

Some believe that when Kyrgyzstan joins the Customs Union, drivers will gradually shift to Russian-made cars, which will not be subject to import tariffs, essentially giving Russia a subsidy. But Lesnyakov said Russian cars are more expensive than people think, and certainly more expensive than the current imports. He went on to mock the quality of Russian-made cars. “People must not forget that the salaries Russians and Kyrgyz earn are absolutely different. So nothing will change [in Kyrgyzstan] except prices,” he told EurasiaNet.org.

Lesnyakov has seen a surge in new purchases in recent months, which he attributed to the expected tax hike. He expects sales to drop 50 percent in the coming three years.

Deputy Economics Minister Danil Ibraev says the new taxes will also have the added bonus of decreasing the number of old, highly-polluting cars in Kyrgyzstan. “We are planning to increase taxes not only to harmonize our legislation with the Customs Union’s rules, although it is part of the process. First we are concerned about our environment. Soon we won’t have air to breathe,” Ibraev told EurasiaNet.org. “Even if we were not going to join the Customs Union, we still had plans to increase the tariffs for imported cars. All countries around the world are [trying to] reduce the number of old cars.”

That’s not assuaging drivers’ concerns. “It’s pretty obvious that the price for cars will rise not only by the taxed amount. Car dealers will use this opportunity to up their prices [on cars already inside the country],” said Kanat Nagaev, director of Kyrgyzstan’s Drivers and Transport Owners Union. If at present many Bishkek families are able to afford more than one car, the new tariffs will ensure fewer cars per family, Nagaev said.

For now, Customs Union membership is widely supported among Kyrgyz citizens at large. A poll released this month found that over 70 percent of Kyrgyz favor membership. Many watch Russian television and almost every family has a son or daughter working in Russia. Their remittances are responsible for generating about 31 percent of GDP.

Kyrgyzstan has “no choice” but to join if it wishes to develop its economy, said Jumakadyr Akeneev, a former head of the Oil Traders Association. “We don’t produce anything of our own.”

Akeneev says Kyrgyzstan’s economic weakness is its reliance on re-exporting Chinese goods to other countries in the former Soviet Union. But since neighboring Kazakhstan joined the Customs Union in 2010 and tightened customs rules, the re-export trade has fallen. “We have to join this union to revitalize our economy. When we do, we can produce and export our own products. Resources in Kyrgyzstan are cheap; for investors from Russia and Kazakhstan it is very profitable to come to Kyrgyzstan.”

Bishkek-based economist Iskender Sharsheev predicts the transition to membership will be far more painful than most Kyrgyz realize. “Even though Russian and Kyrgyz media are trying to show the Customs Union’s advantages, public discontent will be heated,” Sharsheev said. “Joining the Customs Union will bring price increases on everything.”