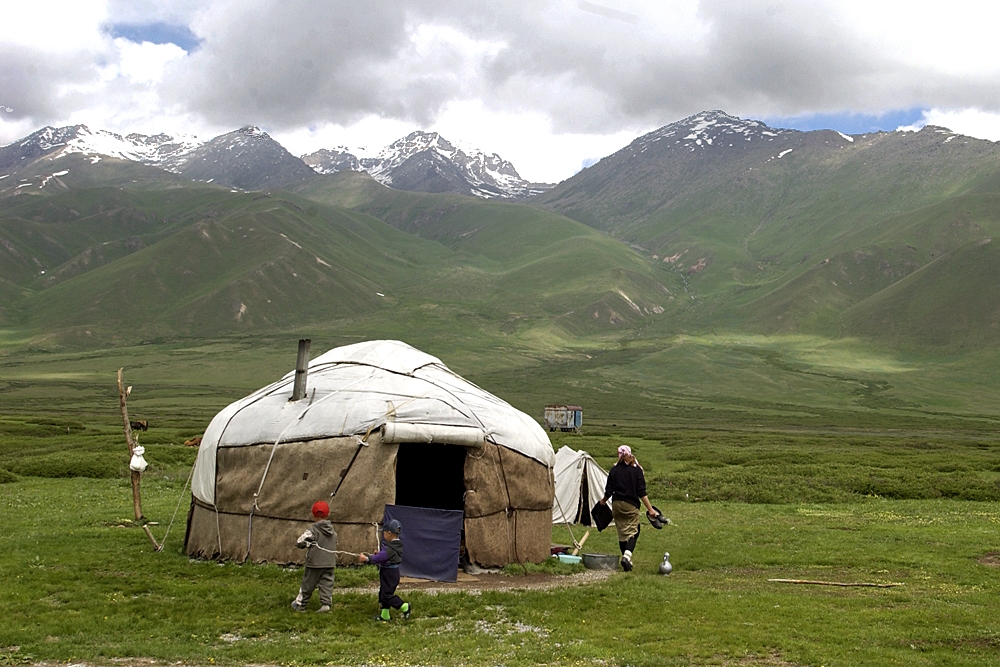 Although bride kidnapping in Kyrgyzstan has primarily happened in the countryside, the illegal activity is taking place in Bishkek as well. As rural migrants flood into the city, young men too poor to afford the pageantry of a traditional wedding opt instead to kidnap a bride. (Photo: Dean C.K. Cox)

Seven years ago Aijan was walking home from her waitressing job in central Bishkek with two girlfriends. They did not notice the three men following them. As two men tackled the other women, one dragged Aijan, 21 at the time, into a waiting car.

“I was screaming, cursing, and hitting them. […] I was crying for them to let me go, but they wouldn’t listen,” Aijan recalls. She did not know where they were headed. When the car finally stopped, a stranger opened the door. “You should be happy that I’m kidnapping you,” was the first thing Aziz, Aijan’s future husband, said.

Many know of bride kidnapping as a phenomenon in rural Kyrgyzstan. But few realize it happens in the relatively liberal capital, Bishkek, too. According to human rights ombudsman Tursunbek Akun, as rural migrants flood into the city, young men too poor to afford the pageantry of a traditional wedding opt instead to kidnap a bride – a method that anecdotal evidence suggests has increased throughout the country in the penurious post-Soviet period.

“Moving to Bishkek, they don’t become liberal-minded all at once,” Akun said of the young men.

Neither do their families. Bowing to social pressure, parents of a kidnapping victim often do not take their daughter back because, the thinking goes, a kidnapping suggests the woman has somehow been sullied. Many kidnapping victims are raped and a daughter’s virginity is prized in conservative Kyrgyz households.

“I wanted to run away, but his family followed me everywhere,” said Aijan (not her real name). She added that her own parents visited her the day after her abduction to say they would not take her home.

A new law signed by President Almazbek Atambayev in January aims to discourage bride kidnapping by increasing the criminal penalty from a 3-to-7-year prison term to 5-10 years. Such a sentence would make the punishment for bride kidnapping roughly the same as that for sheep theft. The legislation also changes the way a criminal case is registered, from a private complaint to a public one. That means a case cannot be dropped, as it could before, if both parties reconcile.

Most cases never make it to court in the first place, observers say. “We ask girls, ‘How can we help you?’ If you want to charge him, we will give you legal advice, provide you with shelter and a lawyer. But they don’t want it,” says Munara Beknazarova, head of Open Line, a Bishkek-based NGO that lobbies to end bride kidnapping.

Beknazarova says conservative mores – especially among parents afraid of being publicly shamed – constitute a major obstacle. “If I could go back to the past, I would leave… But my family told me they blessed our marriage. I was angry and lost,” said Aijan, who today lives in Bishkek and has two children with Aziz, who works in Russia.

While there is little research available, a survey conducted by Open Line found that out of 268 kidnappings that resulted in marriage, 60 percent eventually ended in divorce. At the same time, there is little incentive for women to leave their kidnappers: almost half of the divorcees – 46 percent – admitted that after returning to their parents’ house, they had no say in family issues anymore, and their status in the family diminished.

Beknazarova is optimistic about the new law. “Men should understand that girls have a right to choose. And if this [law] is a lever for action, then I support it.” Her position is widely shared among civil society activists. Ombudsman Akun calls the law an “important precondition” to stop bride kidnapping. “This is not a tradition, this is a crime that is alien to our society,” he told EurasiaNet.org.

Getting the public to see bride kidnapping as a crime is an ongoing challenge. Bubusara Ryskulova, head of the Sezim crisis center in Bishkek, thinks that the law will not be effective until society at large demands change. “Girls should learn to protect their rights. Men need to be told that women are not property, they are human beings,” she argues.

Uluk, a 23-year-old part-time driver in Bishkek, highlights the challenge for anti-bride-kidnapping advocates. “Just think about it, our parents and grandparents were raised like this. Many families that I know were created by kidnapping the bride and they live normally,” Uluk says.

Though many would argue that bride kidnapping is not a tradition, but a product of recent economic decline, that is no consolation to Aijan. “If I wasn’t kidnapped, I would have studied, I would have gotten a degree,” she said. “I can say that it negatively influenced my life.”