The speaker's office is uncertain where he got the money to pay a new mother $600. 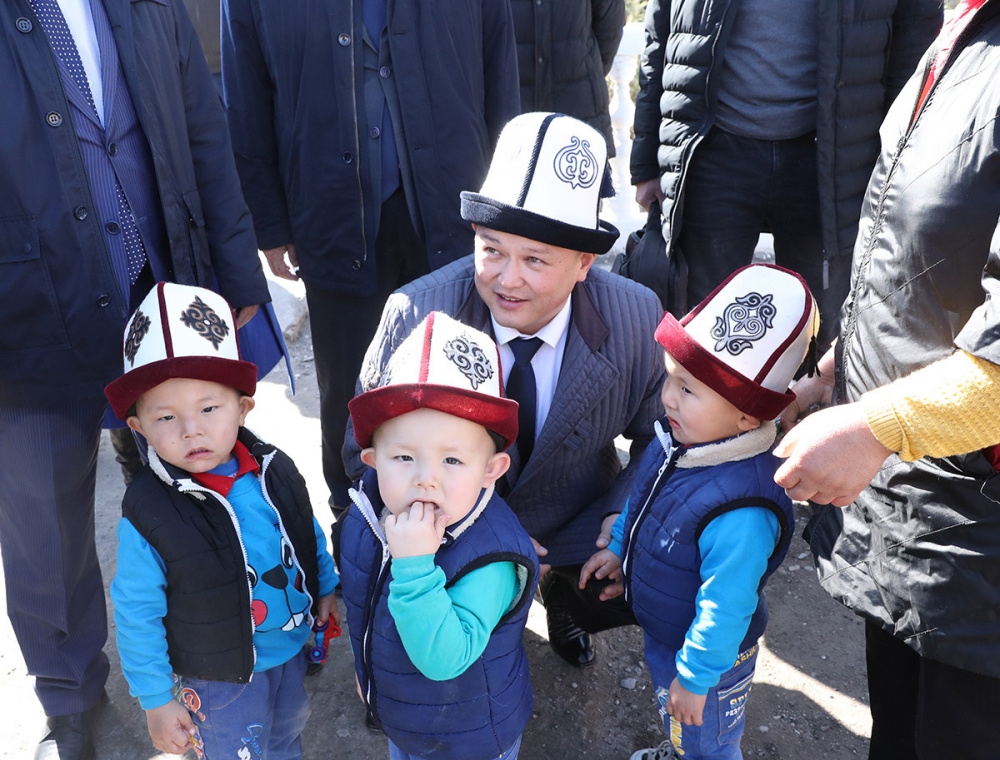 The speaker of parliament in Kyrgyzstan has waded into a pre-election scandal by allegedly paying a woman more than $600 after she named her newborn baby after him.

The payment, which election officials have called a possible attempt to buy off voters, was made on September 14 while Dastan Djumabekov was touring the Talas region in ostensibly official capacity.

Djumabekov decided while on the tour to dwell on a theme favored by the Kyrgyzstan Party, on whose list he is running for a fresh mandate in parliament. The party has pledged a tenfold increase to the one-time payments that have been made by the government to new mothers since 2018. Whereas the suyunchu, as the payment is known, is now worth 4,000 som ($50), Djumabekov and his party vow that it could one day reach 50,000 som.

“Gradually, with the growth of the country's economy, the size of maternity payments will also grow. If the suyunchu is now 4,000 som, then next year it could grow to 10,000, and then to 15,000 after another year,” he told his listeners in Talas.

He then chose to actualize that prospective future by giving 50,000 som (around $630) to one local mother who happened, by chance, to have named her child Dastan.

Kyrgyzstan Party had put up election billboards carrying the image of a baby and advertising that 50,000 som pledge, but it was ordered to take them down as they violated rules forbidding the use of underage children in political campaign materials.

There was an immediate suspicion about where the money given to the Talas mother had come from, with social media users alleging that Djumabekov had dipped into the speaker’s kitty, in effect using his office’s resources to advance party interests. The speaker’s fund has previously been used to make donations to local theaters and to journalists in need.

Djumabekov’s office told news website Kloop that the money was indeed given as part of the speaker’s official activities, and not as a function of his being a candidate, although the 50,000 som figure is suspiciously similar to the one in Kyrgyzstan Party pledges. The office said it was still trying to clarify if the money had actually come from the speaker’s fund.

Atyr Abdrakhmatova, a member of the Central Election Commission, or CEC, has said the gift was essentially “bribing voters” and that Djumabekov should be disqualified from running for parliament.

“Under the guise of parliament speaker, Djumabekov advertised himself, which violates two articles in the law on elections. We will be studying this matter,” Abdrakhmatova said.

Djumabekov is listed seventh on the Kyrgyzstan Party list and so was a certain contender to regain his seat.

This is not the first scandal to hit the party. When the deadline for registration for the elections came around at 6 p.m. on August 24, Kyrgyzstan Party proxies failed to make it to CEC premises on time. Election officials nonetheless bent the rules and registered them anyhow. After much protesting from rival parties, the Kyrgyzstan Party was then excluded, only to then be reinstated by the courts. This favorable treatment by the authorities strongly indicates that the party is viewed as a useful presence in parliament, where it has acted in the outgoing legislature as a loyal and largely silent partner to the coalition government.