Kyrgyzstan: China-born MP’s seat in the balance amid scandal, confusion

Orgalcha’s company has backed the president, leading some to suspect he is bending the rules to favor her. 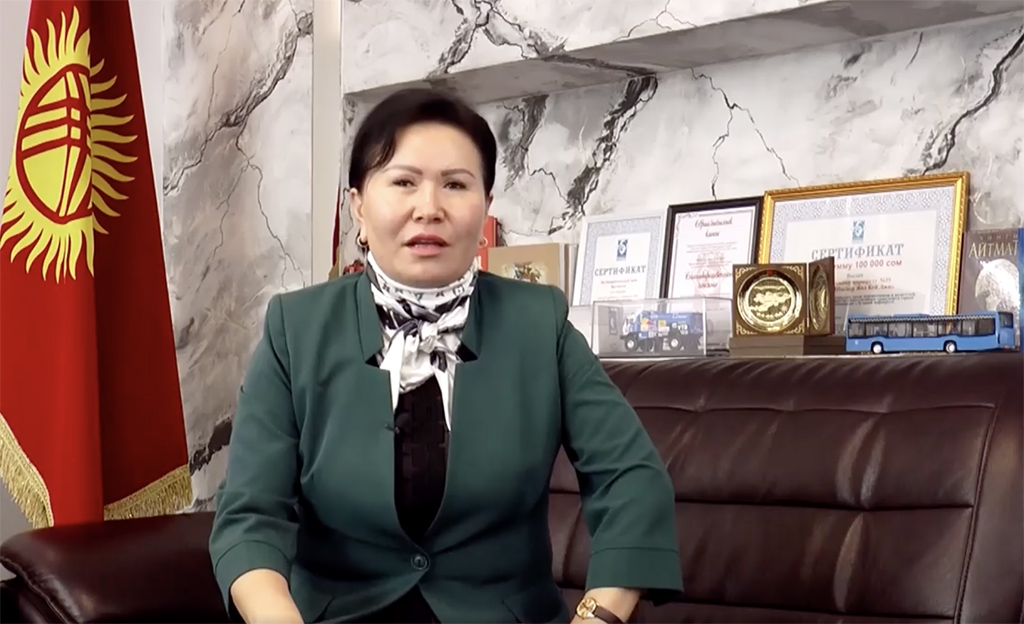 A businesswoman who was set to become only the second Chinese-born lawmaker in Kyrgyzstan’s history is facing a battle for her seat, as well as scrutiny over her ties to President Sadyr Japarov and his wife.

Toktobubu Orgalcha, who is best known as co-founder of the controversial Shydyr Jol KG bus company, ditched her Chinese citizenship in 2018 after moving to Kyrgyzstan several years earlier.

Orgalcha, 49, competed in parliamentary elections last month as a member of the Alyans (Alliance) party that took seven spots in the 90-seat legislature.

Changes to Kyrgyzstan’s electoral laws meant that seats were allocated to candidates of parties that passed the vote threshold both on the basis of a gender quota (1 in 3 seats should be taken by female candidates) and on the number of votes received by the individual candidates on that party list (voters were asked to indicate their preferred candidate from the list they selected).

The challenge for the Central Election Commission was applying the gender quota to numbers like seven, which are not divisible by three.

Prior to the vote, the CEC determined that parties that scored seven seats would only have to allocate two seats to women. But after the votes were already counted, the CEC changed the rules and stipulated that parties with seven or eight seats should offer three seats to women. The December 15 decision left the popular and occasionally opposition-leaning lawmaker Janar Akayev outside parliament, and let in Orgalcha, the third highest-vote-scoring female candidate on the Alyans list.

Alyans, however, challenged the CEC ruling in court on December 21 and won.

The CEC can still appeal against the court’s decision, adding an element of suspense ahead of the first meeting of the new parliament on December 23.

Whilst Alyans positioned itself as a progressive party, Orgalcha is openly supportive of government policy.

The behavior of her Shydyr Jol KG, established in 2015, has given little reason to doubt that she would be an asset to the executive if admitted to the new parliament. After all, it was Shydyr Jol KG’s buses that back in October 2020 shuffled supporters of Japarov between hotels and protest sites as the populist went from prisoner to paramount leader in less than two weeks.

And the same buses appeared again in June to rescue Bishkek residents stranded during a minibus drivers’ strike – an act of charity that was ostentatiously backed by first lady Aigul Japarova’s foundation.

Sensitive to accusations of political sleaze, Team Japarov has been on the defensive this month.

The president’s spokesman Erbol Sultanbayev on December 16 cautioned against politicizing the CEC’s “procedural” decision and knocked back media reports suggesting a close relationship between Orgalcha and Japarova, whom he said are not acquainted.

Japarov took to Facebook a day later to dispel the idea that his wife had any influence over parties or the candidates that were included in their lists.

Alyans candidates were merely “blackening the name” of Orgalcha, having been happy enough to campaign with her previously, he chided.

For many on social media, it is Orgalcha’s potential ties to Beijing, rather than the Japarov family, that are the main source of concern.

“All her life she was a subject of China. And suddenly she changed course and took Kyrgyz citizenship. This is a security threat,” complained one widely shared Facebook post.

Supporters of Orgalcha pushed back against the hate and hailed the trained doctor’s “love for her historical homeland.”

Stigma against ethnic Kazakhs and Kyrgyz “returnees” from China is not new.

But Orgalcha’s loyalties are likely being called into question even more thanks to Kyrgyzstan’s first China-born lawmaker, Adil Zhunus uulu, who served in parliament’s outgoing convocation and was noted for his pro-Beijing positions.

During one parliamentary session in 2018, Zhunus uulu caused a minor stir by proposing to sell Kyrgyzstan’s national air carrier to a Chinese company. The following year, in an interview with Chinese media, he showered praise on China’s so-called “re-education camps,” where over a million Muslim minorities – including his own brother and niece – are believed to have been incarcerated.

Earlier this year Bishkek’s city administration was complaining that the company was ignoring a request to pay around $11,000 in rent for stationing buses on its territory while failing to fulfill a major contract.

But that conflict appears to have been forgotten.

In the same week that the scandal over the CEC rule change broke, City Hall said that Shydyr Jol KG had been handed a new bus route on a temporary basis, pending a competition for the long term contract.

More intriguingly, media in the Russian republic of Tatarstan reported last month that the company had struck an agreement with the Tatarstan-based auto giant Kamaz to assemble low-emissions buses at a factory planned in the Kyrgyz city of Tokmok.

Production of the vehicles slated for routes operated by Shydyr Jol KG is expected to begin next year.