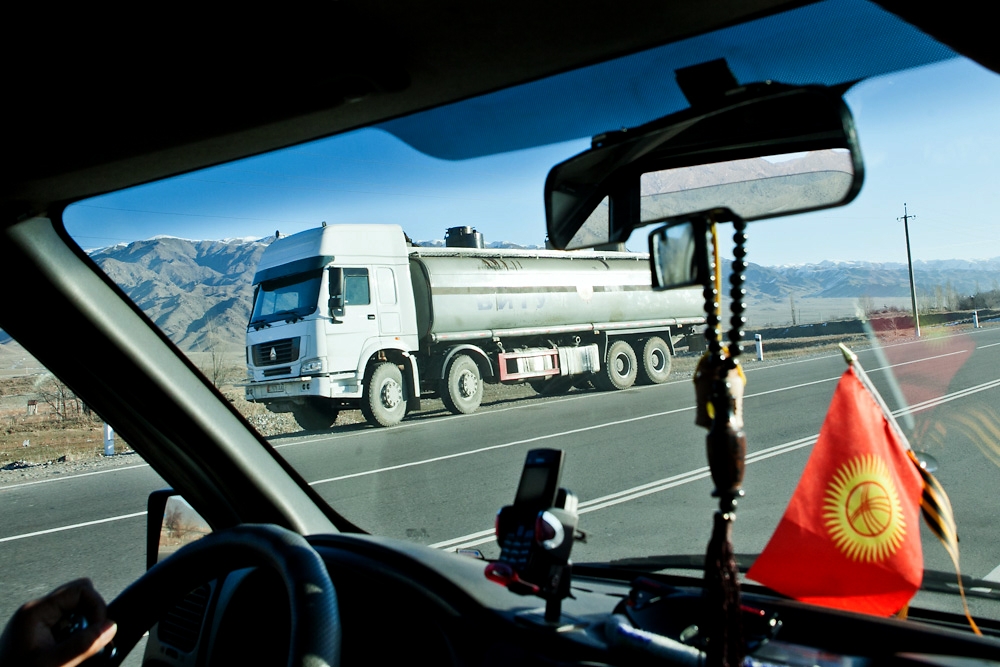 A new Chinese-run oil refinery should offer Kyrgyzstan some relief from its Russian fuel addiction. But is the opposition using anti-Chinese sentiments to score points in its endless tug of war with the government? (Photo: David Trilling)

China is financing the construction of Kyrgyzstan’s first major oil refinery, and excitement is building in Bishkek that the facility could enable the Central Asian nation to break Russia’s fuel-supply monopoly. At the same time, some observers express concern that the project may stoke local resentment, or become enmeshed in political infighting.

The refinery in Kara-Balta, about two hours west of Bishkek, is expected to produce 600,000 tons of fuel annually, enough to end Kyrgyzstan’s dependency on Russian imports, currently pegged at 1,150,000 tons a year, according to the State Statistics Committee. Slated to receive crude piped from Chinese-run fields in Kazakhstan, the project, operated by a smallish Chinese state-run entity called Zhongda, has already witnessed regular environmental protests and labor disputes, which one lawmaker claims are backed by opposition politicians bent on using the facility as a weapon in a political struggle against the government.

Jumakadyr Akeneev, head of Kyrgyzstan’s Oil Traders Association, a lobbying group, agrees the facility is “good news” for a country whose only domestic refining facility produces 70,000 tons of low-quality petrol and diesel a year. Prices in Kyrgyzstan are “determined by one powerful player – Gazprom Neft Asia,” he said, referring to the local subsidiary of Russia’s state-controlled energy giant, which is also responsible for around 80 percent of domestic distribution. Gazprom ships the bulk of Kyrgyzstan-bound fuels from its refinery in Omsk.

Kyrgyzstan imports this fuel duty-free. But in the past Russia has used its market dominance to turn the screws on Bishkek when it has suited Kremlin interests. For example, many commentators assert that a sudden fuel duty introduced on April 1, 2010, was a significant factor in the overthrow of President Kurmanbek Bakiyev’s administration six days later.

Kyrgyzstan needs “a diverse, uninterrupted supply of affordable fuel to grow,” Akeneev says, adding that Zhongda's petrol “should be cheaper than the Russian’s” because it need not travel as far. “The journey [from Russia] reflects a third of the price.”

Whether the refinery will serve its intended purpose is a separate question, according to Peyrouse, co-author of “The Chinese Question in Central Asia.” He noted that “Sinophobia” is increasing in Kyrgyzstan along with Beijing’s growing economic footprint.

Already the relationship between Chinese executives and local residents in and around Kara-Balta is fraught with tension. The refinery has faced strikes and a demand for pay hikes from local workers. Residents living nearby are unhappy with Zhongda's offers of environmental compensation. And local officials complain the plant’s leadership is uncommunicative.

How well the Chinese understand Kyrgyzstan’s chaotic local politics is unclear. "Chinese companies often fail to connect with their host communities, preferring to concentrate on developing relationships with power brokers in the capitals or, as need be, at the local level,” noted a report from the International Crisis Group, a Brussels-based think-tank, last month. “Rising nationalism, ingrained suspicions about Chinese expansionism, few tangible grassroots benefits and a sense that the companies respect only those who can assist their commercial ventures at the highest level have left many disinclined to view China as a beneficial force.”

In an interview with 24.kg on January 18, Zhongda's director, Chu Chan, attributed construction delays to “misunderstandings” that had caused the wrong equipment to be delivered to the site. He promised the refinery would be operational by August, almost 12 months behind schedule. The plant is expected to provide over 2,000 local jobs.

Lawmaker Azamat Arapbayev, a member of parliament’s Energy and Fuel Committee, said he would welcome “10 such refineries” from “any foreign investor” in order to temper Kyrgyzstan’s “dependence on external factors.” Disturbances at the refinery, he maintained, are the work of a “certain circle” of politicians that use local environmental fears to “earn political dividends.”

Observers say the same thing about unrest facing the country’s largest investor, the Canadian-run Kumtor gold mine. Over the past two years, Kumtor has faced protests and roadblocks, calls for nationalization, and four government inquiries led by politicians of every stripe. The trouble has frightened off international investors.

While Arapbayev refused to name names, one group that has opposed the refinery, as well as “Chinese expansion” in general, is a small gathering of nationalists calling themselves “The Movement for the Salvation of Kyrgyzstan.” On March 13, the group held a small rally in central Bishkek, where its leader, Mukar Cholponbayev, warned that Beijing was trying to turn Kyrgyzstan into a Chinese tenant, and demanded the release of three opposition figures jailed last autumn for attempting to storm parliament amid calls to nationalize Kumtor.

While these local politics have helped paralyze foreign investment, many observers will continue to view the refinery as a reflection of a bigger, quieter struggle between Russia and China in the region.

For the moment, the clashing interests “could have benefits” for Kyrgyzstan, argues Arapbayev, the MP. The refinery will reduce Moscow’s ability to bully Bishkek, he says, and open up the oil wealth of Kazakhstan, which has heretofore been more profitable for Astana to export further afield.

“China is our close neighbor, a dynamic and rapidly developing country,” Arapbayev told EurasiaNet.org, musing on the dilemmas that geopolitical competition pose for local policymakers. “But then we also have older, more traditional relations with Russia. Those relations are still operational.”