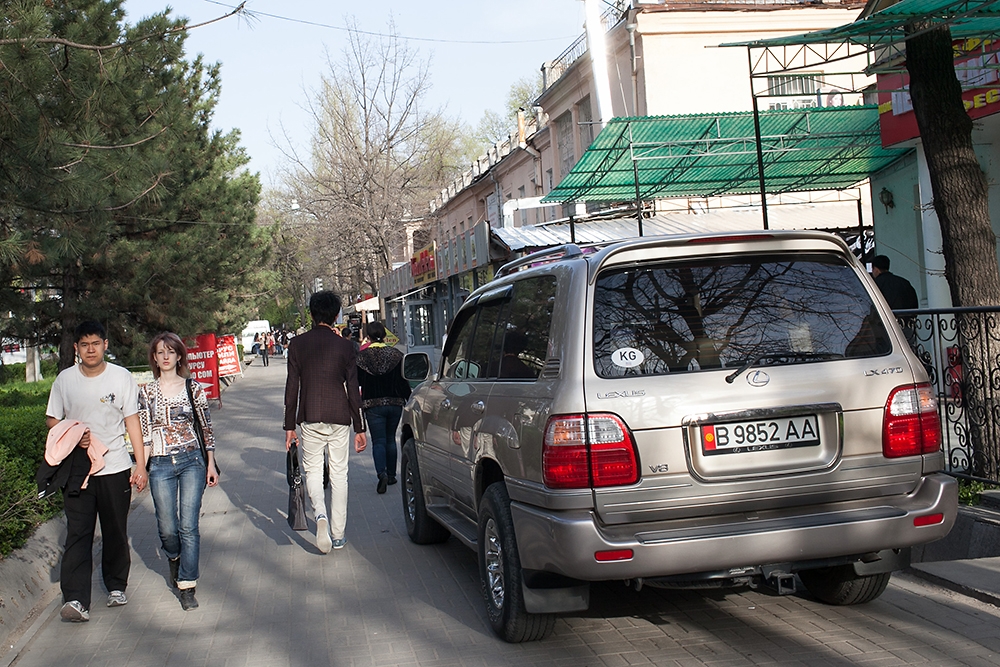 The driver of this Lexus SUV is considered “kham” – or overly boorish and rude — for parking on the sidewalk on Bishkek’s Chui Avenue in April 2013. Luxury cars like this generally face little trouble from traffic police, who tend to pick on drivers less likely to have protection from someone influential. (Photo: David Trilling)

Power and wealth rule on the roads and sidewalks of Kyrgyzstan's capital, Bishkek. The drivers of expensive cars tend to flout traffic and parking rules with impunity. But where police fail to enforce laws, a civic group is mounting a name-and-shame initiative to counter bad, sometimes dangerous habits.

On April 1, inspired by a similar movement in Russia, a group of concerned Bishkek youth filmed themselves asking drivers who were parked illegally to move their cars. If the drivers refused, the activists placed a pizza-sized sticker on the car’s windshield that read “StopKham Kyrgyzstan: Respect for traffic rules is a key to your safety.” The video shows several arguments between activists and drivers, but most drivers obeyed the requests. Over 11,000 people have already watched the video on YouTube; the comments are overwhelmingly supportive of the activists.

StopKham is an established group in Russia. It is named for the Russian word “khamstvo,” which is a particularly obnoxious type of rudeness. A person with “khamstvo” is “kham.”

The Kyrgyzstani analogue was founded by Sultan Askarov, who says he was inspired by Bishkek activist Bolot Ibragimov. Ibragimov is known for his videos of egregious traffic violations and his criticism of the traffic police, who he alleges are corrupt and fail to enforce basic laws.

Askarov, a 21-year-old student, tells EurasiaNet.org he is seeking official registration from the Justice Ministry. He fears that without it, should the group place a sticker on the car of a powerful person, that person “will start looking for information about us, saying we are not registered, or they can insult or beat us, for example.”

A spokesman for Bishkek’s traffic police says he is “glad” that activists are concerned with road safety, but recommends they coordinate their activities with law enforcement agencies.

“If there are organizations that want to participate in our raids, they are always welcome. Not only drivers, but [also] pedestrians violate traffic rules. We organize different raids [stopping speed-limit violators, cars with illegally tinted windows, etc.]. Anytime they want, they can join us,” the spokesman, Tilek Otorov, told EurasiaNet.org.

The rise of groups like StopKham is indicative of growing public fatigue with authorities’ inability or unwillingness to establish the rule of law. In another example of such civic activism, a nationalist group, Kyrk Choro, raided Bishkek karaoke clubs earlier this year, shaming women they found inside by accusing them on video of engaging in prostitution. At the time, Kyrk Choro leaders claimed they had support from law enforcement agencies. Police denied this and the group’s leader, Zamirbek Kochorbaev, was later detained by police and charged with disorderly conduct.

And in January, a group of villagers near Bishkek beat to death a local man accused of rape, rather than turn him over to the law enforcement agencies, which are generally considered corrupt and ineffectual. The case sparked a debate about staging public executions.

“We set a goal [to restore order] and we have many supporters, so we will go all the way. We want to make people respect each other on the roads,” StopKham Kyrgyzstan founder Askarov said.

Unlike Russia’s StopKham, which is generously sponsored by the federal government, according to Russian business news outlet RBC, the Bishkek activists say they receive no outside funding, and the group is their own initiative.

Critics of StopKham complain the stickers may provoke aggression from drivers.

“Do you want everybody to follow the law? But how about spoiling private property? Or this is not important? On what grounds can you do this?” one commentator wrote beneath the YouTube video.

For now, the stickers are easy to remove. But Askarov says his group is considering applying stronger stickers that read, “I don’t care about anyone. I park as I want to,” as the Russian group does. Askarov hopes the campaign will make drivers think twice before parking illegally on the sidewalk.

“We will act calmly. We discussed our roles with the activists. [During each outing] we will have a person who will be responsible for security of the cameraman, and this person will break up fights if necessary. I cannot guarantee someone on the [activist] team will not fight back if hit by an aggressive person. But we do not need conflicts,” which will damage the group’s reputation, Askarov explained.

Drivers have mixed feelings about the group’s mission.

“I try not to violate traffic rules. But because I drive a taxi, sometimes I have to stop the car in inappropriate places, where the client asks me to, or to wait for him there. I think people will still keep violating the rules, despite the activism,” a taxi driver from a popular Bishkek service told EurasiaNet.org. In StopKham’s first video, many of the cars targeted were taxis.

Aichurek Kurmanbekova, a banker in Bishkek, says StopKham is a good way to educate people ignorant of traffic rules, but thinks the campaign should address Kyrgyzstani drivers’ notorious aggressiveness.

“As a driver, I am concerned not with how other drivers park, but with their behavior in traffic. Many of them do not know the basic rules,” Kurmanbekova told EurasiaNet.org. “Only the traffic police can deal with them effectively. But yesterday I told a policeman how two other drivers violated traffic rules in a specific place and he just laughed.”