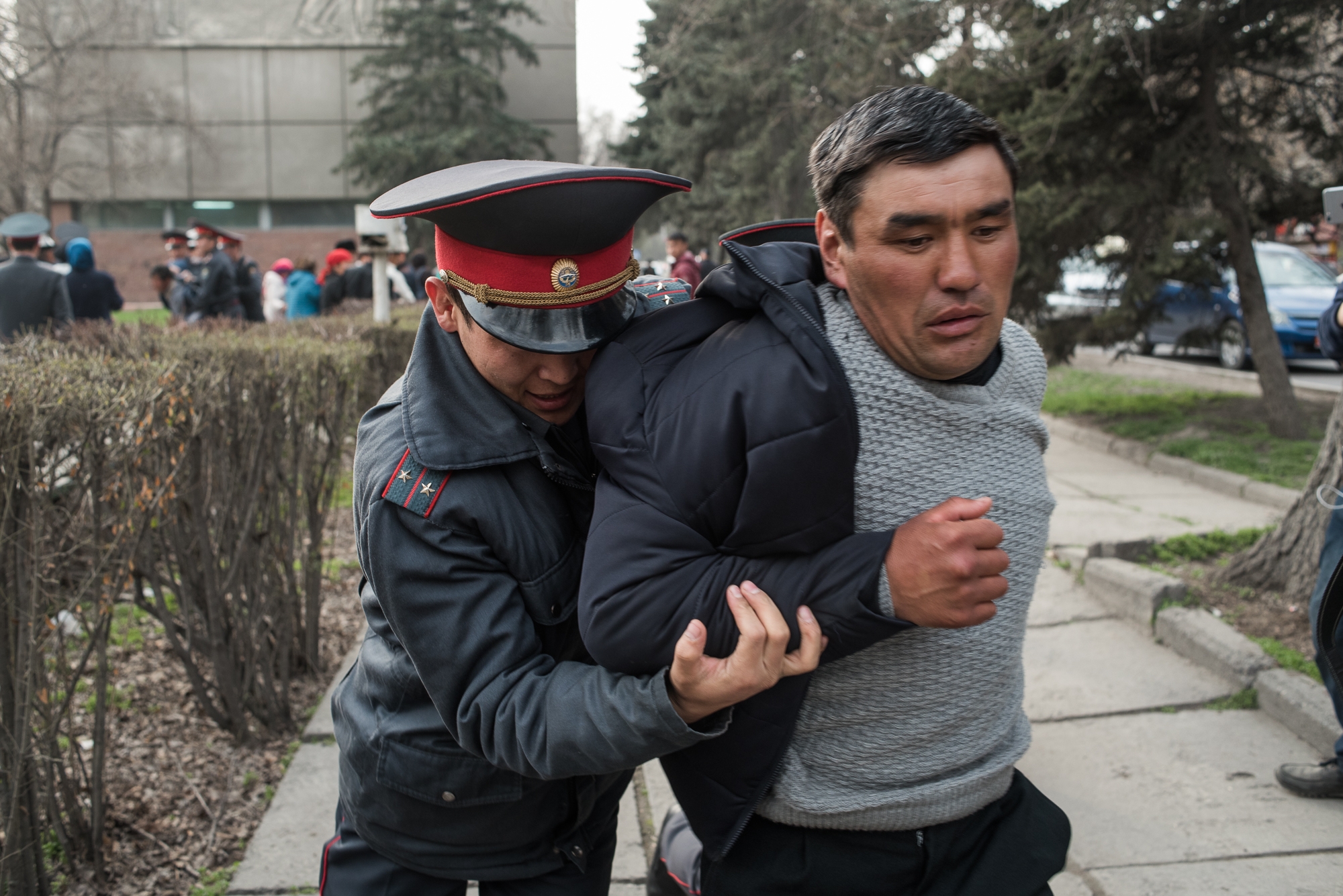 A man attending a rally in support of detained opposition politician Sadyr Japarov being dragged away by a police officer on March 25, 2017. (Photo: Danil Usmanov)

A self-exiled and wanted opposition politician returned to Kyrgyzstan on March 25 to face questioning by the security services, sparking a rowdy demonstration by his indignant supporters that degenerated into ugly scuffles with police.

The Interior Ministry said 68 people were detained following the clashes.

This episode of unrest has further ratcheted up unease in a decisive election year as authorities step up pressure against the opposition and independent media.

Sadyr Japarov, a member of the nationalist Ata-Jurt party, returned to Kyrgyzstan after spending four years in neighboring Kazakhstan, where he was evading arrest for his alleged involvement in whipping up disturbances in a regional town in 2013.

After Japarov arrived the Bishkek headquarters of State Committee for National Security, or GKNB, where he was taken after being detained at the land border with Kazakhstan, several hundred people — mostly young men — identifying as his supporters, mustered at the building. Some chanted: “Free Japarov!”

A lawyer for Japarov, Sharadidin Toktosunov, said the detention of his client was illegal, as he was initially summoned only as a witness, but was now being subjected to questioning.

Investigators accuse Japarov of funding the organization of violent protests in October 2013 in the Issyk-Kul region — ostensibly in favor of nationalizing the economically vital Kumtor gold field — with a view to sowing political unrest. During those protests in the town of Karakol, crowds reportedly took Issyk-Kul governor Emil Kaptagayev hostage. According to some accounts, Kaptagayev’s captors at one stage doused him in petrol and threatened to set him alight.

The GKNB accuses Japarov of directing that alleged kidnapping.

“By means of mobile communication, he gave instructions not to free Kaptagayev, and he instructed the captors to operate along the lines of a ‘previously agreed plan,’” GKNB said in a statement.

Kaptagyev, meanwhile, wrote on his Facebook account earlier in the week that he had no interest in seeing Japarov arrested and prosecuted.

“I have no grievances against him or questions for him,” he said, adding that he had no firm evidence Japarov was behind his kidnapping.

Less than an hour into the rally outside the GKNB building on March 25, the more aggressive elements in the crowd threatened to force their way into the building so as to free Japarov. Attempts to break through the heavily policed cordon were roughly repelled.

Later, police began detaining protesters and, according to witnesses, firing warning shots in the air. Reporters at the scene said police deployed tear gas to break up the crowd. Growing number of police officers with riot shields gradually moved in to the area to try and restore order.

“Police officers were trying to calm Japarov’s supporters, but at that stage they began to throw plastic bottles and bricks at the police. The crowd was behaving very aggressively,” the Interior Ministry said in a statement.

The unrest wound down toward the afternoon, but the scenes will create anxiety all the same.

Kyrgyzstan is set to hold president elections in November. President Almazbek Atambayev is not permitted to stand again, but his embattled opponents have argued that his entourage is plotting to continue holding the reins and that they are escalating pressure on all their opponents in order to do so.

This article was updated to include number of people detained and with photo.