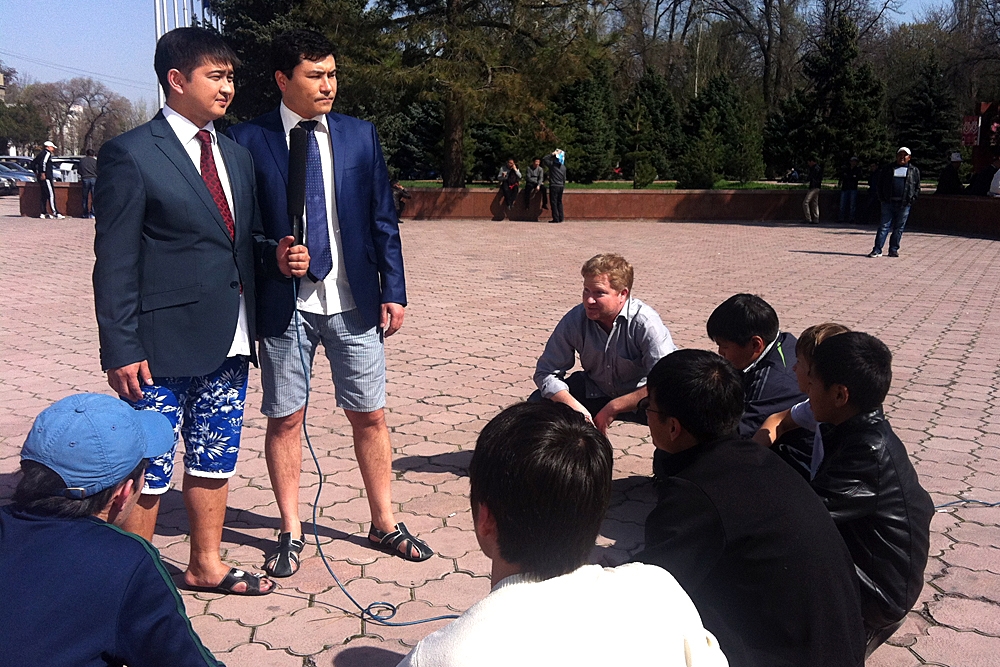 “A patriotic state official only takes bribes in the local currency,” deadpans Nurlan Anarbayev, one of three presenters on a new Kyrgyz television satire news show. With its motto “more than the truth, a little less than a lie,” the show, Studio 7, filters politics through the prism of comedy, employing a format similar to American primetime hit, The Daily Show.

“Our society is very politicized. We thought the time was right for this kind of show,” says 32-year-old Anarbayev.

Although Anarbayev finds inspiration in Daily Show host Jon Stewart, his training came as a performer in the university comedy league KVN, a grassroots institution that goes back to the Soviet era, and which remains a fixture in many of its successor states. Recently, several of Anarbayev’s cohorts from that era formed Asia Mix, the first comedy troupe from Bishkek to perform in the televised KVN Supreme League in Moscow, wowing the Russian glitterati with sharp routines about labor migration and the lives of millions of Central Asian workers in Russia.

“Half our country saw us off on the way to this tournament,” ran one of their jokes. “The other half met us here in Moscow.”

The Kyrgyz comedy scene is enjoying something of a renaissance, but it is one still dependent on outside funding. Asia Mix’s trips to Russia were sponsored by Russian energy giant Gazprom and a local microcredit bank. The Studio 7 program, meanwhile, receives support from Washington’s development arm, USAID. Big People, a sketch show involving Anarbayev, as well as several members from the Asia Mix team, was a hit on both Kyrgyz and Kazakh TV, but still had to rely on contributions from private donors to get on air. The show ran from 2010-12.

In spite of money issues, where there is talent, there is always potential, says Kevin Bleyer, an Emmy-winning writer for the Daily Show who traveled to Kyrgyzstan to work with Studio 7 as a USAID consultant. “These guys are so incredibly good at more than one thing. In the US, comedy has become specialized,” Bleyer told EurasiaNet.org during a recent test screening of Studio 7’s pilot episode. “These guys are script-writers and script-editors and executors all at once. They are unbelievable.”

A big reason for that versatility is KVN, says Anarbayev. (The Russian acronym stands for “Club for the Merry and Inventive.”) The comedic tradition came into being in the Soviet Union in 1961, was silenced for 14 years starting in 1972, and rehabilitated during the Gorbachev-era perestroika campaign in the late 1980s. “[KVN] teaches you how to perform as part of a team – what punch line should come first, second, last. It is an education in comedy. We apply that knowledge in our respective television projects,” Anarbayev said.

“We took them from different parts of society,” recalls Eldiyar Kenensarov, one of the show’s lead writers and actors. “If they hadn’t been real, they wouldn’t have been funny.”

Kenensarov, who captains the Asia Mix KVN team, argues that Kyrgyzstan’s relatively open, if somewhat dysfunctional, political system provides opportunities for comedy troupes in ways that those of neighboring countries cannot. As if to illustrate his point, a goateed parliamentarian from the ruling party, Daniyar Terbeshaliyev, appeared as a guest on the first episode of Studio 7, accepting with good humor a ribbing from Anarbayev about his likeness to English pop singer George Michael. Kenensarov says such interaction between comedians and politicians would be impossible in authoritarian Uzbekistan, where KVN is now “practically dead.”

It was comedians from the Big People show who took the lead in forming Asia Mix. Pitted against teams from Ukrainian and Russian cities, Asia Mix turned uneasiness about Central Asian labor migrants in Russia, who are often employed in the service and construction sectors, into a powerful comic weapon. In one routine, Kenensarov posed as a 14th century Mongol chieftain. Confronted by an actor playing a Muscovite noble criticizing Kenensarov for helping to “raze Moscow to the ground,” Kenensarov told him not to worry: “In 700 years’ time we will be building it back up again.”

Though the team did not win the television contest, Kenensarov hopes their performances helped change some of the stereotypes Russians harbor about Central Asians as uneducated and unsophisticated. “It was self-irony. We were laughing about those stereotypes and ourselves at the same time,” Kenensarov said. “If you have complexes about who you are, and how other people might see you, you can’t do comedy.”

Chris Rickleton is a Bishkek-based journalist. Saltanat Ibraeva contributed reporting for this story.