A look back at how Osh celebrated the Islamic holy month, which ended with 13,000 men praying on the city's main square this morning. 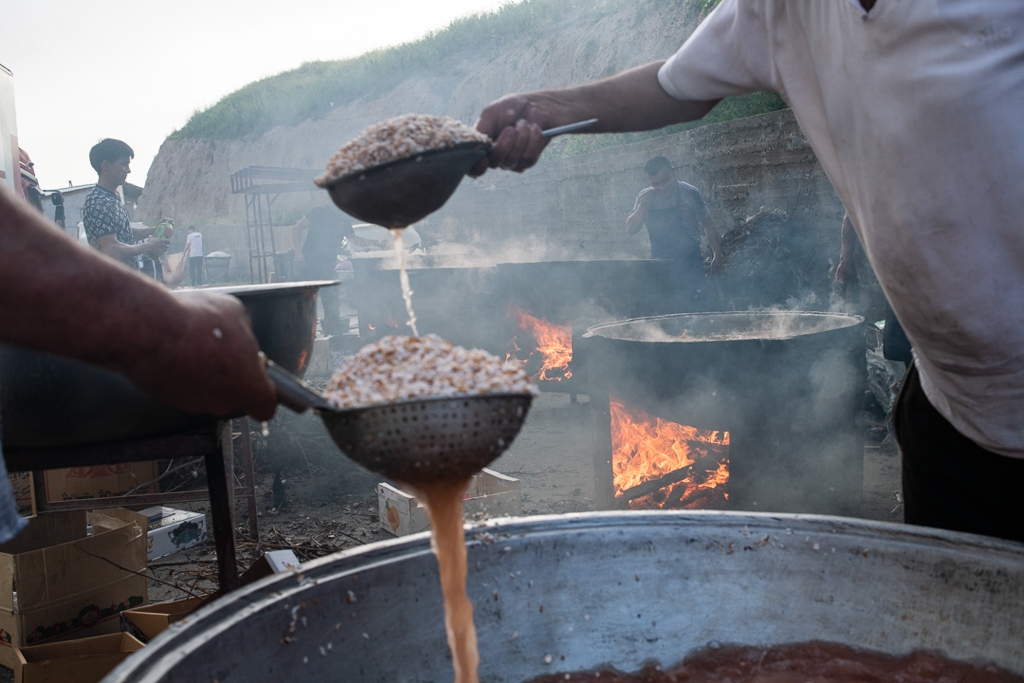 (all photos by Danil Usmanov)

As nighttime approached during Ramadan in Kyrgyzstan’s second city, Osh, people headed up the Sulaiman-Too, the sacred hill that dominates the landscape, to watch the final moments of sunset.

Off the tourist trail, a little higher than people usually climb, groups prepared for iftar, the daily breaking of the fast.

As soon as the sun disappeared over the horizon, the azan, the call to prayer, would waft from all the city’s mosques. The fast was broken with a drink of water and then food, as the faithful admired views of the city. 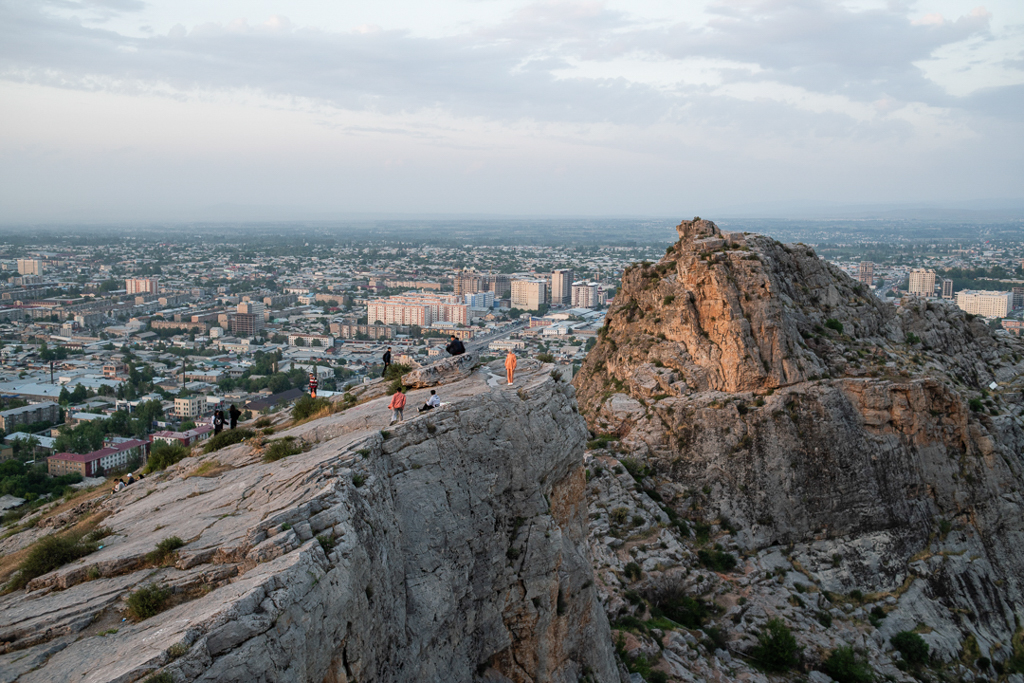 At the foot of Sulaiman-Too, there is a mosque by the same name. Volunteers there cooked plov every day. When food was ready, women and children approached with dishes and pots. Once the cook was done serving the regular customers, as he called them, the giant kazan cooking vessel was driven around the city to distribute to those unable to go to the mosque. 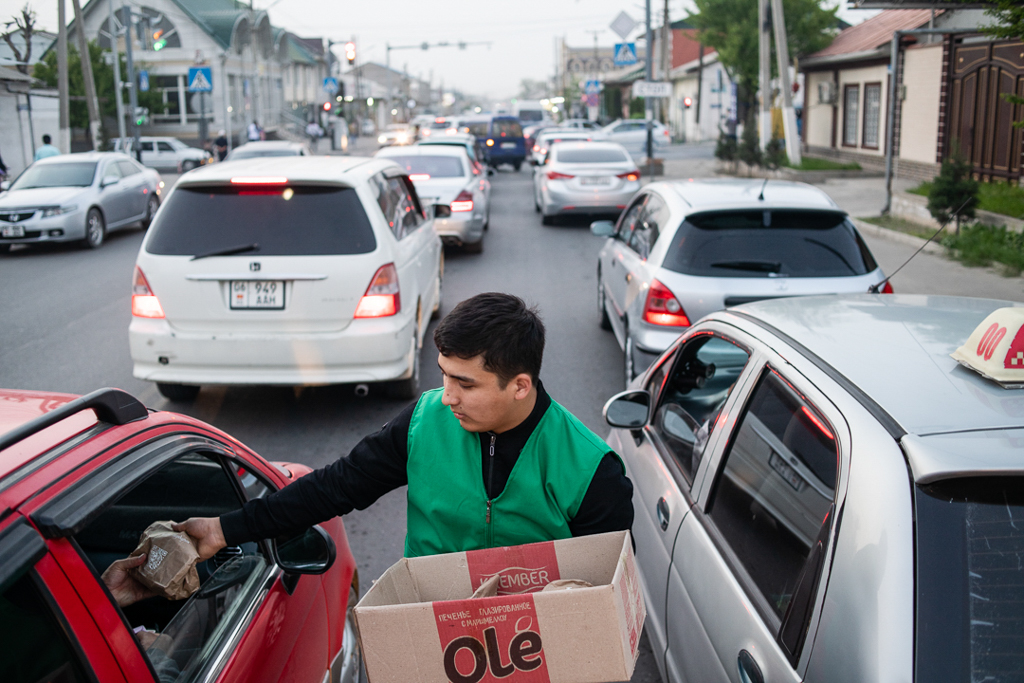 Because large numbers of people hold to the self-deprivation rituals of Ramadan, many cafés and nightclubs close for the holy month, which ended this year on May 1. At the time of iftar, however, the cafes that are open are packed with diners. It is almost impossible to find a table.

The demand for food is such that pop-up iftar bazaars appear. The oldest of them is in the Shai-Tubeh neighborhood. Enterprising Osh citizens set up tandoor ovens and grills on the sidewalk for baking and cooking skewered meats. 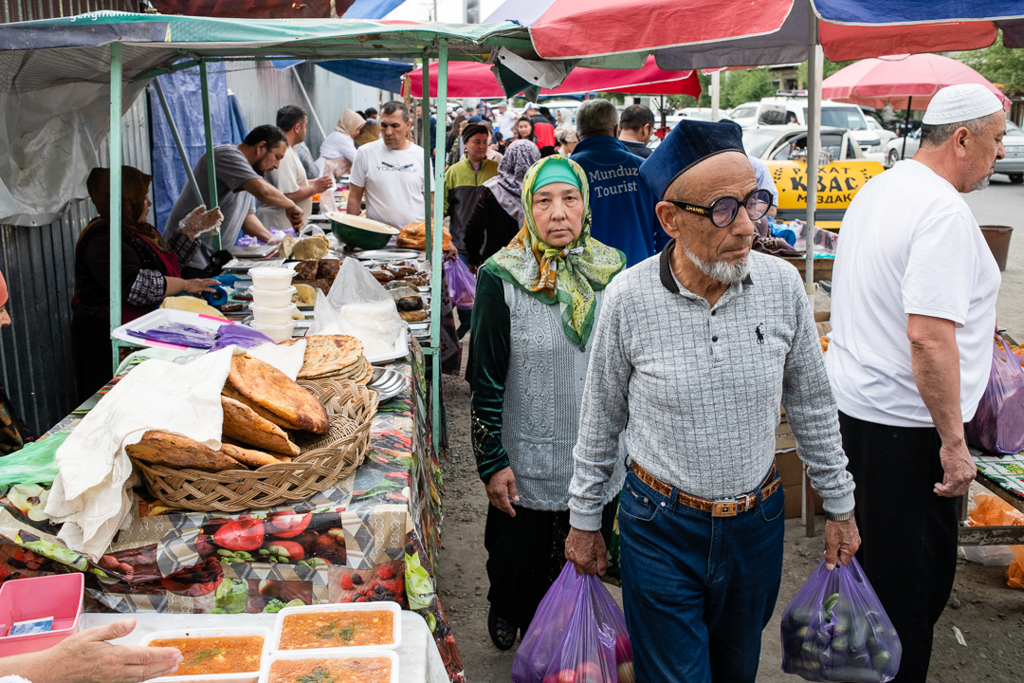 Cooking isn’t the only money-making opportunity during the holy month. There is a ritual song known in Kyrgyz as Zharamazan. Traditionally, groups of performers would go from household to household reciting the verses, which would be embroidered with quotations from the Koran, and showering assembled families with wishes of well-being and happiness. The modern spin on this custom is for groups, usually men of different ages, to do the tour of the city’s cafes and restaurants to perform their routine for tips. Using musical instruments and getting dressed up in concert clothes is usually a good way to earn more.

One trio ensemble from a local music college began their rounds around half an hour into iftar, barging into private dining booths and singing Zharamazan. They made about $50 for about an hour and a half of performing. 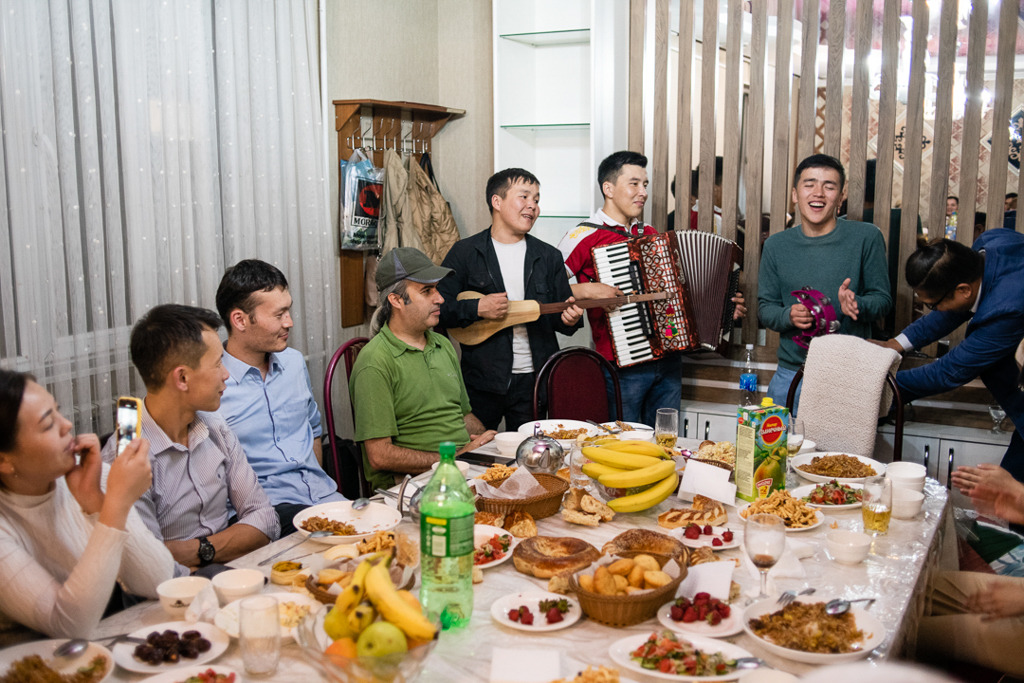 Some evil tongues, meanwhile, maintain there is another profession that loses out in this period. As men strain to keep themselves from sinful activity, sex workers complain of a drop in custom.

Among those performing the rites of Ramadan were Muslim students from India. One person who decided to stay in Osh after graduating took charge of preparing iftar spreads for his compatriots. So it was that servings of plov were complemented by Indian pilaf – the two dishes being close relations, as it happens. 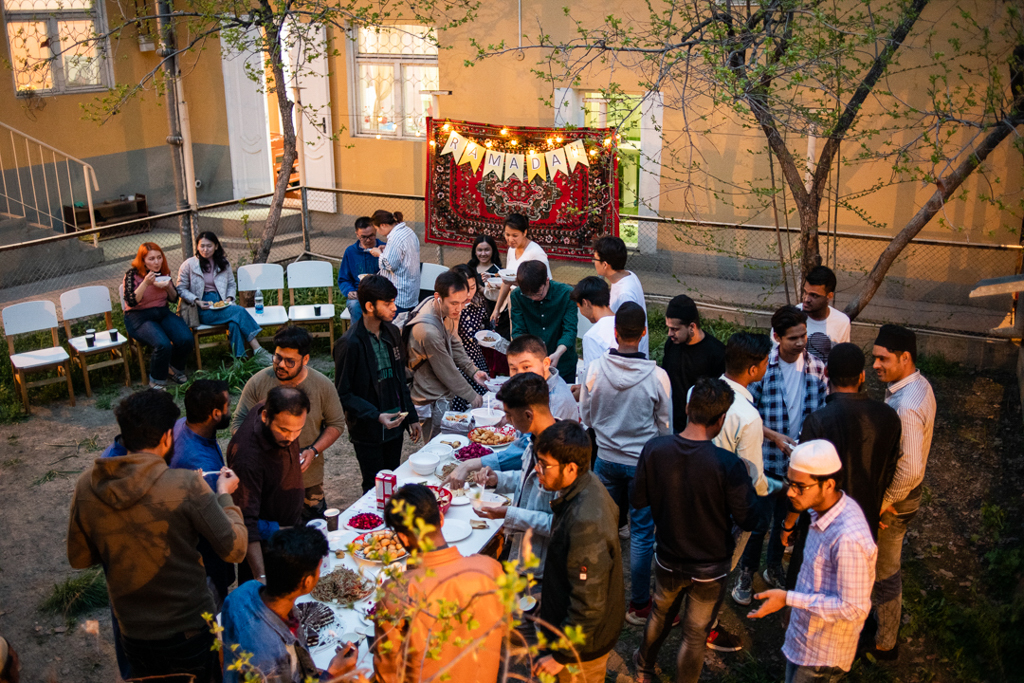 A highlight of Ramadan in what is known as the Night of Destiny, Laylat al-Qadr

in Arabic, or Kadyr-Tun in Kyrgyz. This occasion, which this year fell on the night of April 27, recalls when the Angel Gabriel is said to have revealed the words of the Koran to the Prophet Muhammad.

This year, the main event to mark that date was held at the Sulaiman-Too mosque. As per custom, cooks slaved over giant cauldrons of plov as devotees sat waiting on the lawn. At the entrance to the mosque, hawkers sold perfumes, skullcaps and prayer rugs. As the azan was recited, crowds started to arrive. After the prayer, everyone lined up for their portion of plov. 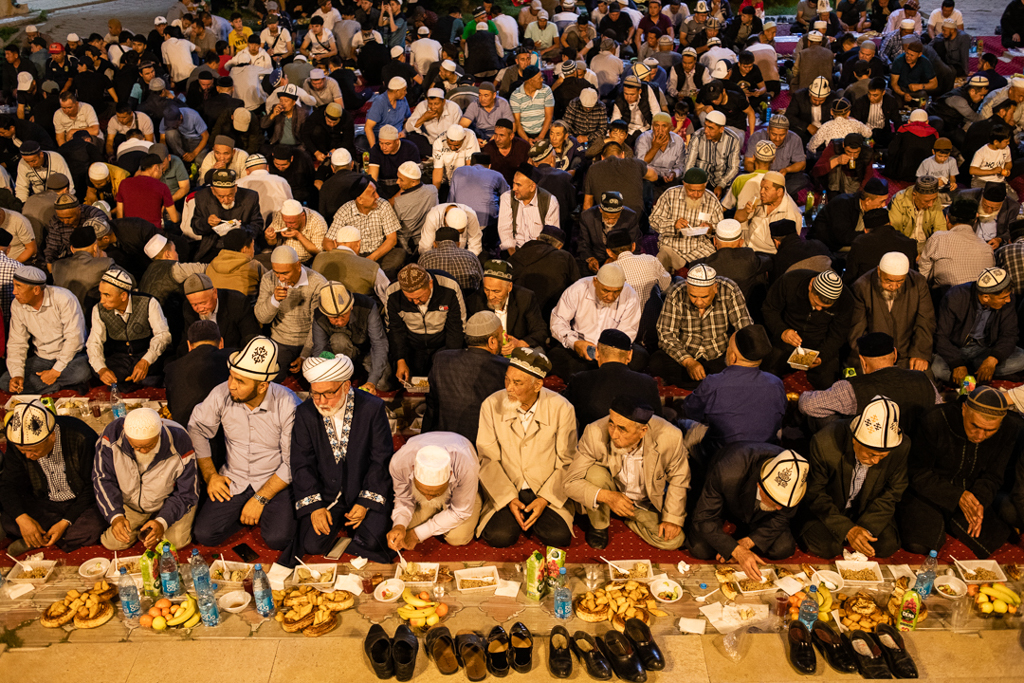 The chance to gather in numbers carried particular significance this year, following the interlude of social distancing required by the COVID-19 pandemic.

After the fast was broken, more people, all men, started crowding into the mosque. The ablution room was overflowing and suffocating. By 10 p.m., space had run out even on the second floor of the mosque. Eventually, the congregation spilled out onto the street. Young girls weaved through the crowd offering rugs for sale. The worshippers laid their mats in careful rows. Officials estimate around 5,000 people attended the prayers and sermon.

At one point, everybody began weeping. It is not the custom for Kyrgyz men to display their emotions in this way, so the sight of thousands of them sobbing at once is little short of shocking. 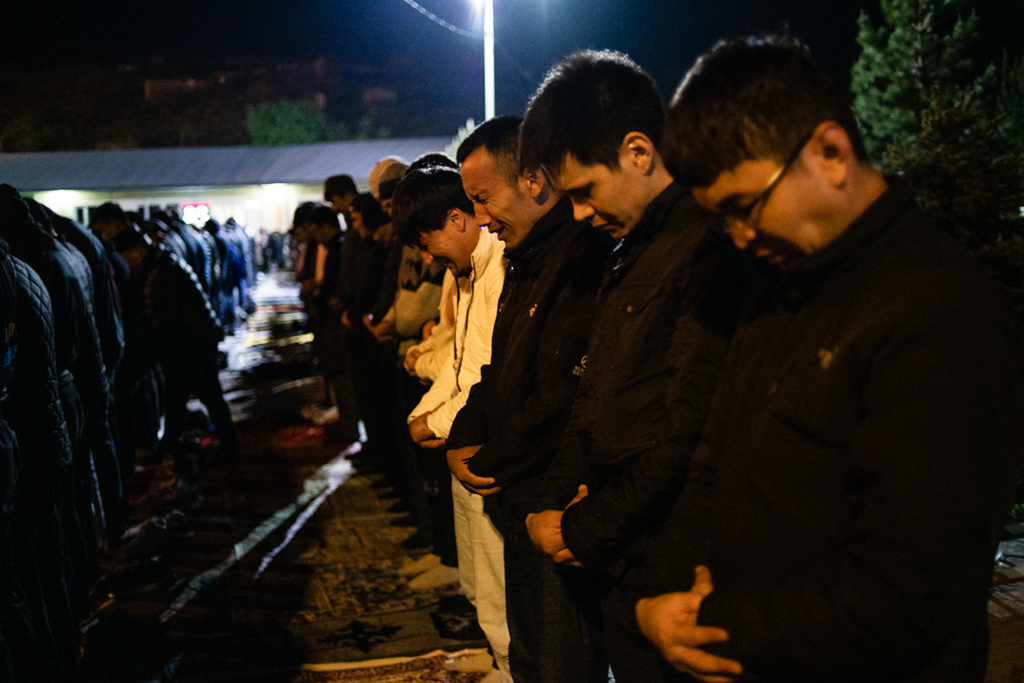 Ubaidulla ajy Sarybayev, the chief imam in Osh, delivered 18 minutes of blessings, some of it to wish well to Kyrgyzstan’s neighbors, Kazakhstan, Tajikistan, Turkmenistan, and Uzbekistan. There was a subtle nod to the border disputes that have caused repeated bouts of unrest between Kyrgyzstan and Tajikistan in recent years.

Sarybayev had words of blessing for all kinds of Kyrgyz government workers too: "Grant peace to doctors and policemen. Grant peace and redemption to the chekists [security services]. Grant peace to the border guards.” 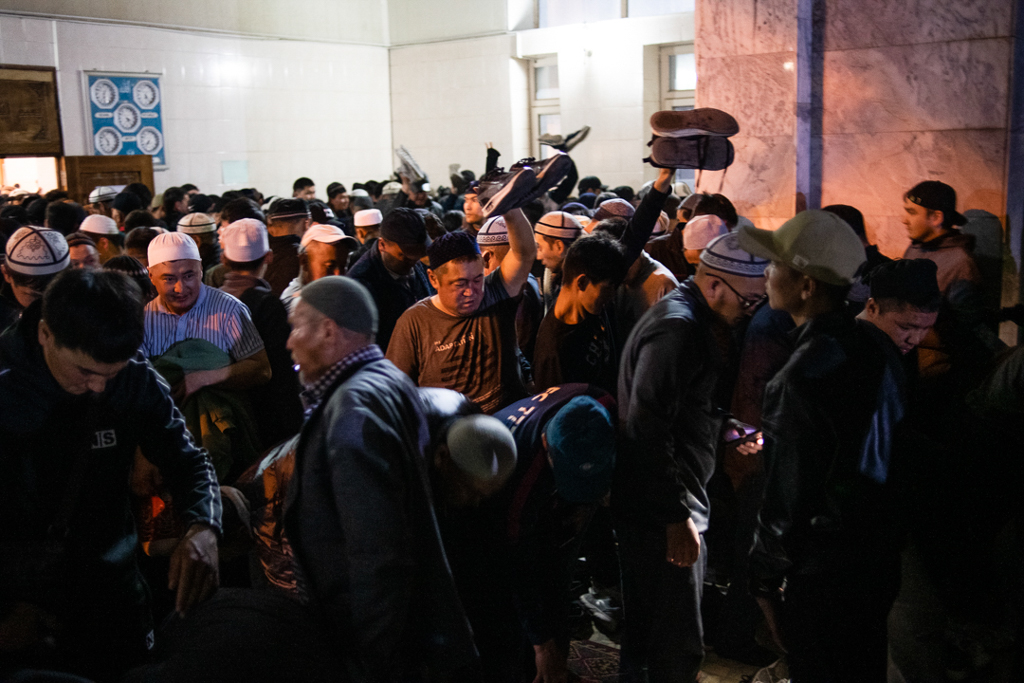 Out on the street, traffic had ground to halt. People either remained inside their cars or came out onto the street, holding their palms open in a gesture of devotion. By one in the morning, the ceremony was complete and everyone began to disperse. Worshippers leaving the mosque hunted down their shoes. Osh, normally quiet and deserted at this hour, came to life. The all-night cafes that were open were jampacked, long lines formed at ice-cream stands. Few got to bed before four in the morning. 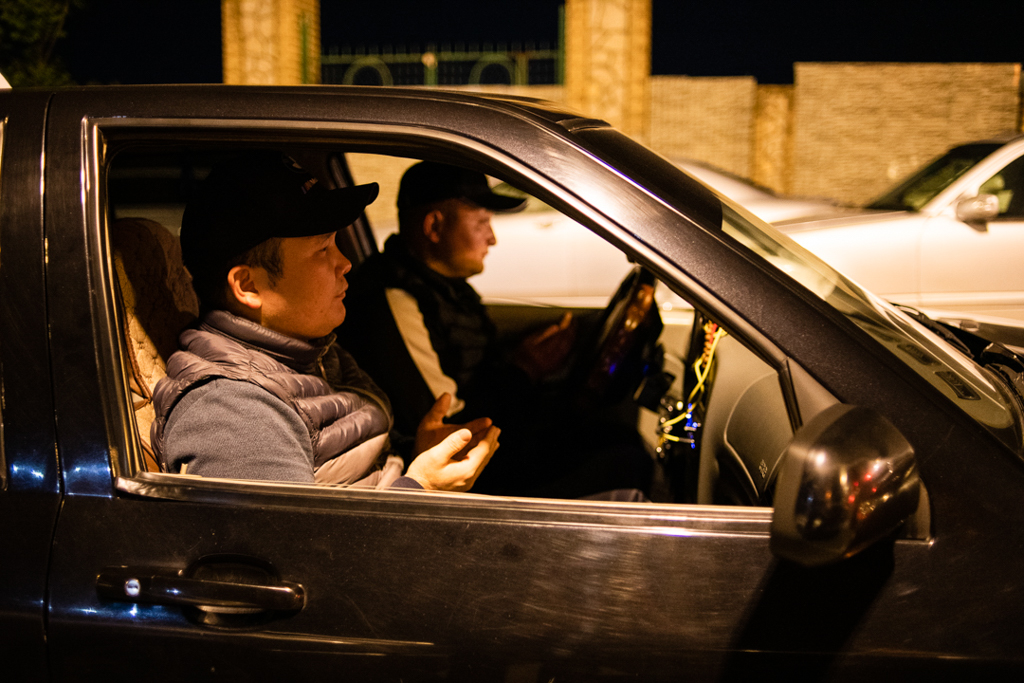 Ramadan in Osh closed with a colossal blow-out. Organizers with Human Appeal, an Islamic UK-based nongovernmental development organization, which contributed to the event, say they believe it might have been the biggest iftar in Kyrgyzstan’s history.

Fully 1.5 tons of plov, 11,000 manty dumplings, and 50,000 of the lepyoshka round breads that are the cornerstone of any Central Asian meal were served. Cooks grimaced from the heat and smoke as they strained and stirred the plov in the kazans. 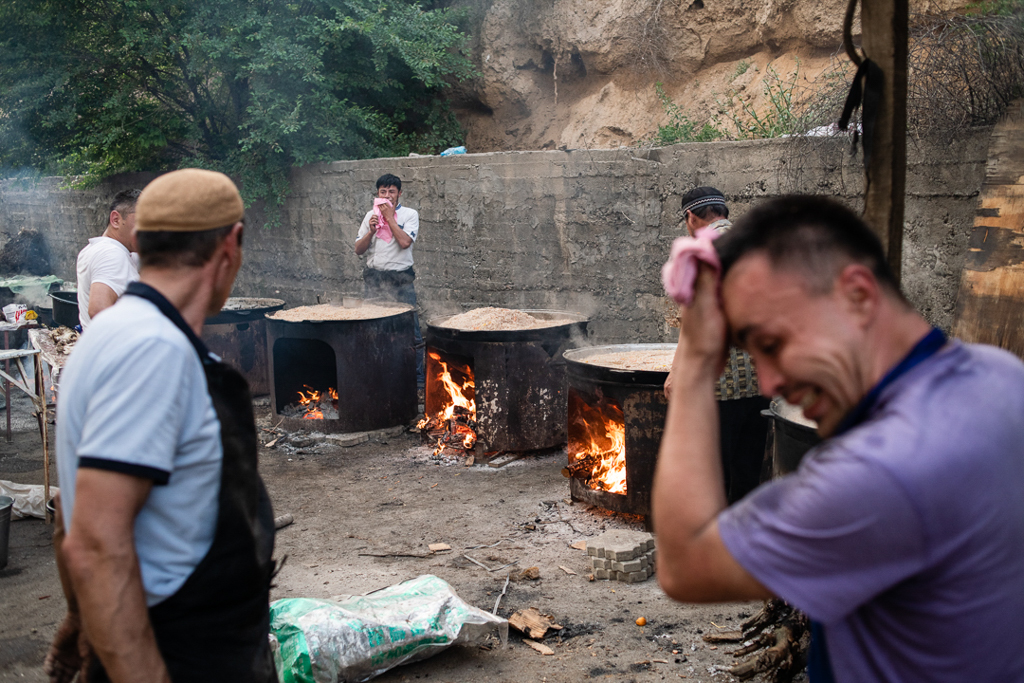 By eight in the evening, everything was ready. Worshippers were summoned by the azan. On this occasion, women were also admitted to mosque, although they were segregated to the first floor, while the men prayed in the upper tier.

Sarybayev, the imam of the city of Osh, supervised the flow of people and delivered instructions with his microphone. Some sat before the spread, but Sarybayev insisted that they pray first. Once the time arrived to break the fast, there was a crush for the eating area. Volunteers scrambled to maintain order and fit in everybody. The feast was designed to accommodate 5,000 people. After iftar, the imam asked the women to leave so that the men could continue praying.

The day after Ramadan, on the holiday known locally as Orozo-Ait, and Eid al-Fitr in Arabic, the city was again roused by the voice of imam Sarybayev. His sermon blared out of speakers on Osh’s central square, which is overlooked by a giant statue of Soviet leader Vladimir Lenin. By 7:30 a.m., the entire space, which can accommodate up to 13,000 people, was already packed. 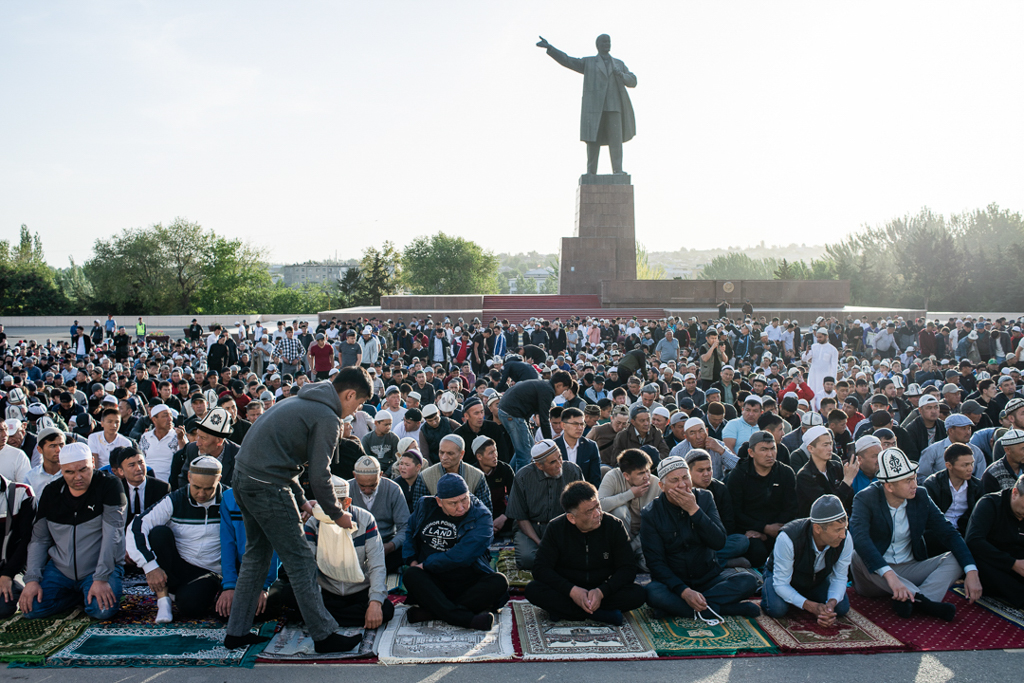 A trolleybus passing nearby got stuck in traffic. Motorists abandoned their cars to take part in the prayer, which lasted half an hour. With the period of fasting now over, dispersing worshippers were free to eat. Many treated themselves to an ice-cream. 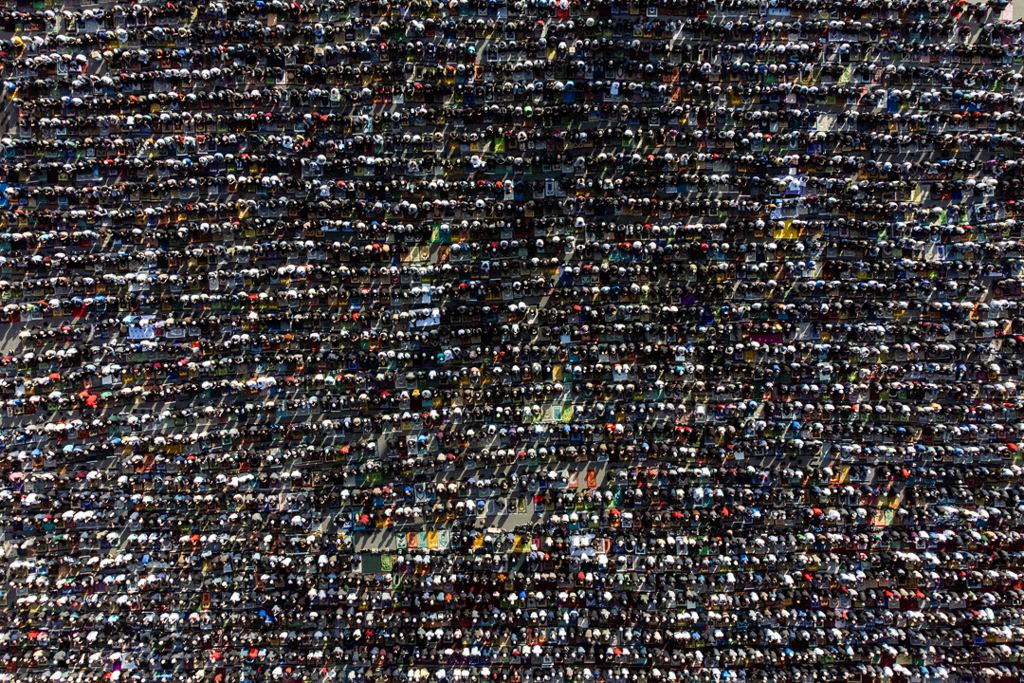