The election did not feel very competitive in the president's hometown. 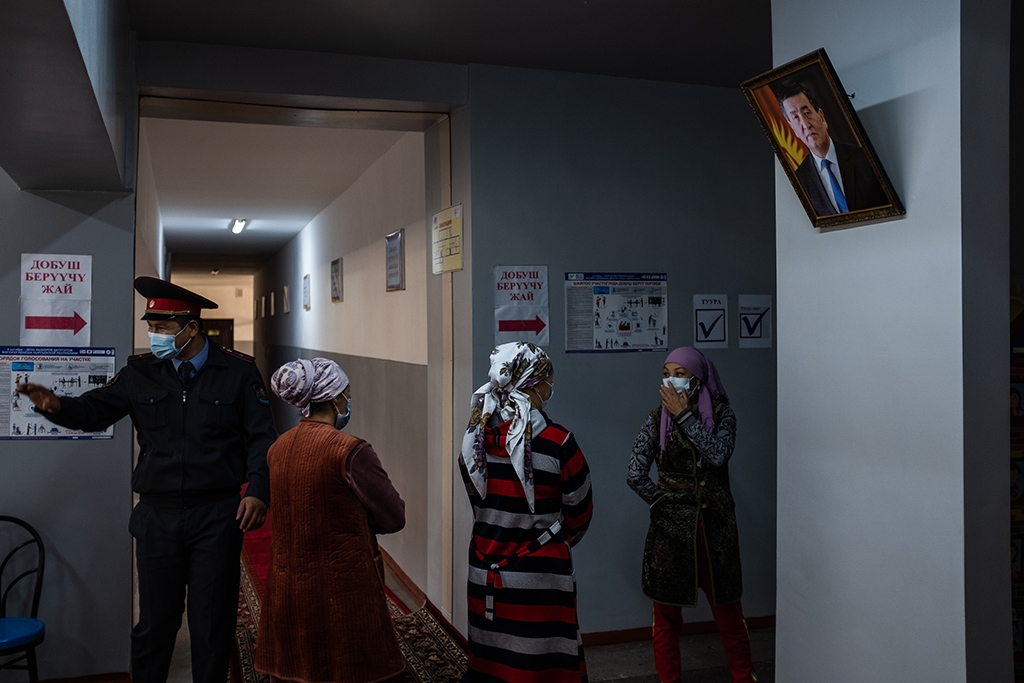 Inside a polling station in the village of Kara Kuldja. (all photos Danil Usmanov)

Kyrgyzstan’s president offered a gushing assessment of his country’s parliamentary elections after casting his ballot.

“These elections are taking place under conditions of strong political competitiveness,” Sooronbai Jeenbekov told reporters in the capital, Bishkek, on October 4. “All parties were offered equal opportunities and given a level playing ground.”

But it did not feel very competitive in his hometown, Kara Kuldja, a 700-kilometer drive over mountain passes to the south. Of the 16 parties on the ballot, only one had campaign posters, banners and billboards plastered across town: Birimdik. A single large poster for a rival party, Ata-Meken, had been ripped down on some recent date.

The voters who emerged from polling stations across the Kara Kuldja district, and who were willing to disclose to Eurasianet what party had received their ballot, volunteered a uniform answer. They often struggled to motivate their choice, however, other than to say that Birimdik was a “good party.”

Zulfiya Yermekpayeva, a housewife, provided perhaps the most simple and suggestive explanation.

“Everybody supports Birimdik.” she said outside polling station No. 9011, which lay just a stone’s throw from President Jeenbekov’s family home. “I don’t know. It’s a good party.”

She wasn’t wrong about the unanimous support.

It may have helped that Birimdik activists, immediately recognizable by the red-white-blue party logos on their baseball caps, were so heavily present at the polling station. One guarded the entrance, counting in the voters, who were only allowed four at a time, in line with coronavirus-related safety requirements. Another capped man waited for voters at the exit, for safe measure.

None of this means that Birimdik was the only player in the elections. According to early returns, Birimdik was neck-and-neck with Mekenim Kyrgyzstan, a party widely understood to be financed by shadowy former deputy customs chief Rayimbek Matraimov. Mekenim Kyrgyzstan proved especially dominant – taking more than 50 percent of the vote – in the southern city of Kara-Suu, home to Matraimov and his brother, Iskender, who was on the party’s election list.

Early results, which saw both those parties capturing more than 24 percent of the vote, means the two frontrunners will be equally and dominantly represented in the 120-seat parliament.

The Kyrgyzstan Party, a bland, businessman-focused force that readily votes in line with the government of the day, also looks like a shoo-in.

All these parties are rivals on paper, although their critics would argue that they ultimately have a shared interest in the continuation of the current corruption-ridden and crony-centric order.

Two nationalist-leaning parties popular in the south appeared poised to enter parliament, according to an early and incomplete count on the evening of October 4.

Parties running on reformist and government-critical platforms – Reforma, Ata-Meken, Bir Bol – fell far short of the 7 percent threshold needed to get into parliament.

Elections in Kyrgyzstan have in the past few years become more sophisticated and notionally better guarded against fraudulent practices like ballot box-stuffing. Before voters are able to get hold of a ballot, they are required to have their fingerprints scanned. Their voting slip is then fed into an electronic scanner, which feeds back the relevant information to a central server.

There are some tricks even high-tech cannot defeat, though. 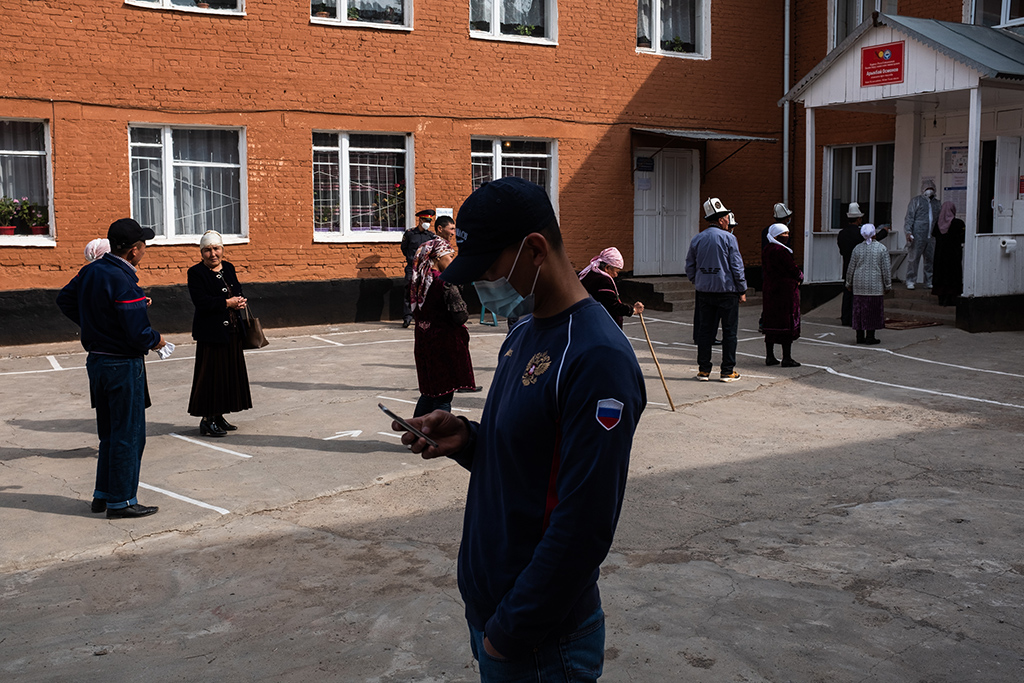 As the party-of-government in-waiting, Birimdik has benefitted greatly from what are drily known, in the terminology of post-Soviet electoral shenanigans, as administrative resources. This means things like government employees being pressured to attend political events and, later, to vote for certain desired parties.

A more common allegation hanging over these elections has been that of vote-buying. Some instances have been captured on camera. Kloop news website posted footage it said showed a voter taking payment of 2,000 som ($25) after proving he had cast his ballot for Birimdik.

Multiple people were caught in the act of taking photographs of their filled-out voting slip – typically taken as likely proof a voter is providing visual evidence in return for money.

Tynchtyk Shainazarov, a member of the Central Election Commission, freely admitted that this was happening and pledged to take action.

“We are indeed receiving a lot of video footage where this has been clearly filmed,” he said. “Most likely, fines will be levied.”

A related issue that is causing considerable grumbling during this election is a procedure envisioned for voters casting their ballot at a precinct not in their place of residence. The provision was implemented at the 2011 presidential elections to account for the volume of internal migration.

Around half a million people – a record 14 percent of the total number of eligible voters – have applied for the Forma-2 ballot. Independent observers say the figure is that high because parties have charged their candidates and canvassers in precincts across the country with the job of drumming up votes at all costs.

One method of achieving that end, it is alleged, is for party activists to pay voters to apply for a Forma-2 and have them travel to the required precinct. Independent election observers reported multiple cases of voters being bussed around the country, far from their actual place of abode.

All the alleged instances of election malpractice notwithstanding, the day proceeded with noteworthy calm. Polling stations were manned by masked staff spraying voters’ hands with disinfectant. More disciplined locations enforced social distancing, although Eurasianet observed an unseemly crush at one voting station in the city of Osh as the close of day approached. 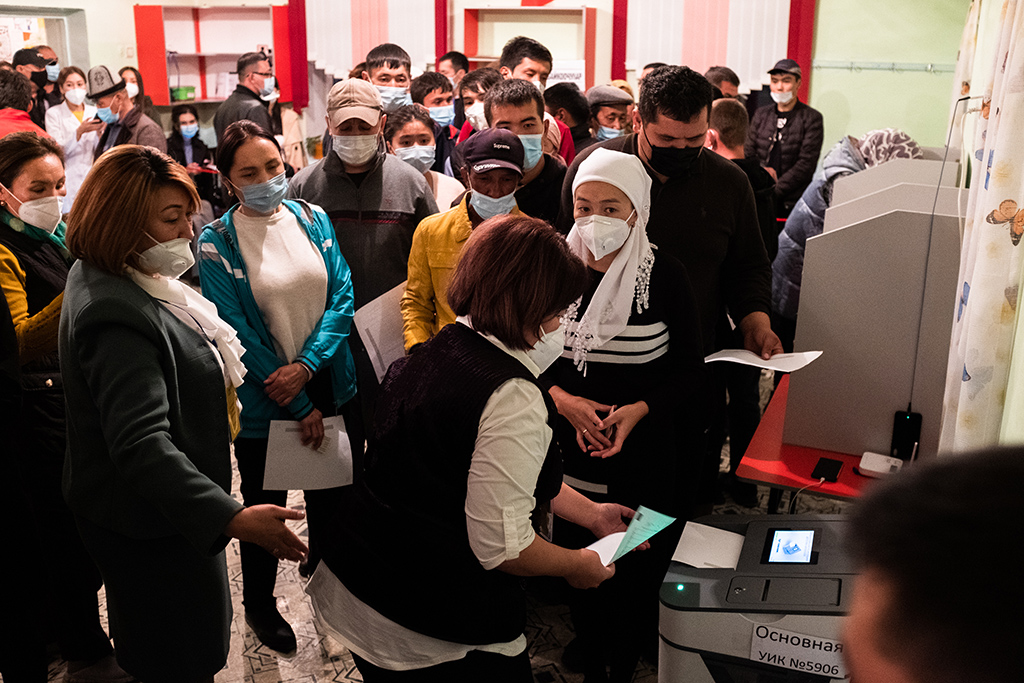 There were isolated cases of aggressive behavior toward journalists, however. A reporter for Kloop in Osh, Khamidullo Uzakov, was assaulted by a group of unidentified people and had his phone stolen. While the attackers were not caught, Uzakov was required to spend hours at an Osh police station filing a report. In the northwestern city of Talas, a woman attacked reporters with RFE/RL’s Kyrgyz service, Radio Azattyk.

Also in Osh, Reforma party leader Klara Sooronkulova said she was attacked at a polling station.

“They grabbed me by the neck, the chairman of the precinct attacked me, and some man physically intimidated me,” Sooronkulova was quoted as saying by Vesti news website. “Candidates have every right to be in the polling station, and what is more, they should enjoy a degree of immunity.”