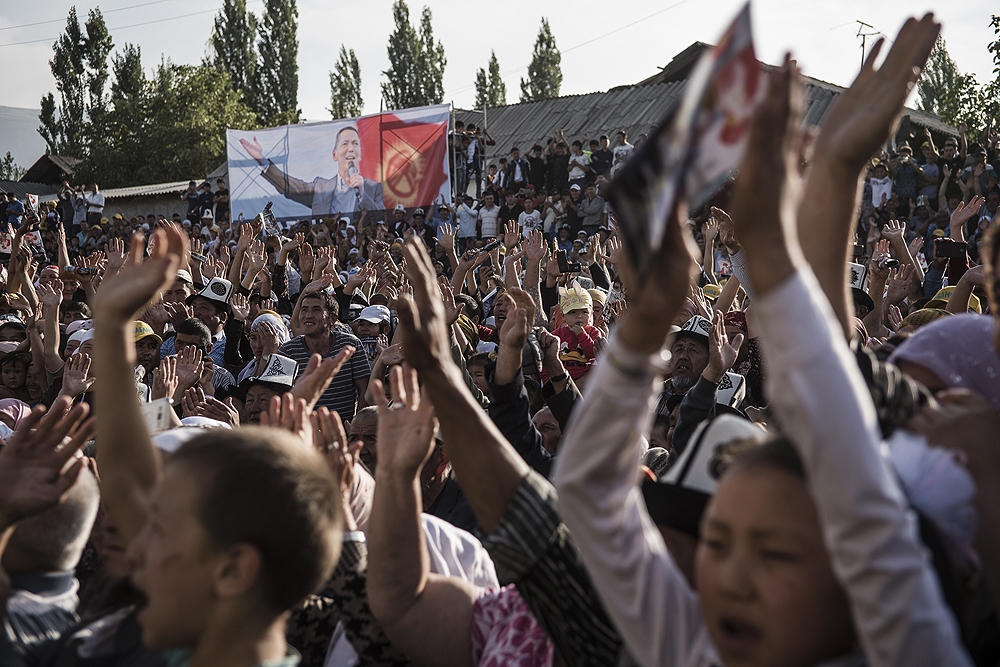 A crowd cheers during a speech at a rally in the southern town of Nookat for presidential election contender Omurbek Babanov on September 15, 2017. (Photo: Danil Usmanov/EurasiaNet.org)

For the first time in Central Asia’s post-Soviet history, one elected president is set to hand power over to another freely and fairly elected chief executive. That is the plan at least for Kyrgyzstan’s upcoming presidential vote.

Roughly a dozen candidates are standing in the October 15 election, but only two really have any chance — the former prime minister and the pick of the ruling Social Democratic Party, Sooronbai Jeenbekov, and multimillionaire businessman and leader of the Ata-Jurt/Respublika opposition coalition, Omurbek Babanov.

The starting pistol for the presidential race was fired one month before election day. A stunning number of billboards, overwhelmingly advertising Jeenbekov and Babanov, quickly appeared around the country. Ideologically, there is little that clearly distinguishes the two leading candidates, and their respective campaigns dwell in generic terms on the prospect of a prosperous future for Kyrgyzstan under their rule.

Jeenbekov, an agricultural specialist and accountant by training, is a consummate elite insider. He has variously served as Agriculture Minister, briefly in 2007, and then governor of his native Osh region, from 2010 to 2015. He was appointed prime minister last April, but stepped down in August to devote himself full-time to campaigning. Jeenbekov’s brother, Asylbek, is another political heavyweight and served as the parliamentary speaker starting in December 2011. Asylbek Jeenbekov left that job just as his brother was named prime minister, avoiding a scenario in which siblings would have been presiding over two key branches of government.

Babanov is no less the insider, although he differs from his rival in some important respects. He is a native of the more urbanized north, as opposed to Jeenbekov, a son of the rural south. Regional dynamics play an important role in Kyrgyz politics. Babanov is younger — 47 years old to Jeenbekov’s 59 — and his campaign has effectively exploited this point by contrasting his dynamism against his rival’s staid public persona.

Babanov was born the only son of a deputy in the Supreme Soviet of the Kyrgyz SSR. In the mid-1990s, he moved to Kazakhstan and went into business, setting up highly profitable hotel, fuel and realty companies. He got into politics in 2005, getting elected to parliament in politically turbulent times. Weeks after Babanov won his seat, President Askar Akayev was toppled from power amid the Tulip Revolution. Babanov was a prominent critic of the elite that later took over, so his decision in 2009 to briefly occupy the post of deputy prime minister under the notoriously corrupt President Kurmanbek Bakiyev, who was himself overthrown in 2010, came as something of a surprise. In October 2011, he was named prime minister by outgoing President Almazbek Atambayev, but had to step down in 2012 amid allegations he was given a $1.3 million racehorse as a bribe. In the year before the 2015 parliamentary elections, he engineered an improbable union between his ostensibly business-oriented Respublika party and the nationalist Ata-Jurt party.

There had been plans for a third, vaguely feasible, contender to be put forward by an alliance of influential southern politicians. But that plan fell apart earlier this month, and elements of the would-be third option went in different directions. One southern kingmaker, Kamchibek Tashiyev, has thrown his support behind Jeenbekov — an unexpected decision given that he was sentenced to time in jail in 2013 on contrived charges of attempting to seize power. Another politician, Bakyt Torobayev, leader of the reform-minded Onuguu-Progress party, has appeared on Babanov campaign posters suggesting he will be named prime minister under a new administration.

“The candidates are neck and neck, and the fight is unfolding as one between the [two of] them. As far as booklets and campaign poster goes, Babanov is far ahead of everybody else, but Jeenbekov has a little more support. But both of them stand a good chance, and the winner will be decided in the second round,” Kazakpayev predicted.

Unless any one candidate receives the required majority, there will be a second round of voting, to take place no earlier than two weeks after results are announced.

In lieu of election platforms, which are understood by very few voters, the campaigns are relying instead largely on darker political arts.

“What we have here is more a competition in kompromat [dissemination of compromising material] than electoral programs. The candidates’ manifestos are weak — they have either been copied from elsewhere, or they don’t have one at all. And nobody reads these things anyway. That’s how we do things,” Kazakpayev said.

The leading candidates are making some promises, albeit not very concrete ones. Jeenbekov, for instance, has vowed to continue the agenda of Atambayev, who is barred constitutionally from serving more than one term as president. That means ostensibly fighting corruption and poverty, creating an independent judiciary, and developing tourism, medicine and education. In reality, however, progress in these areas under Atambayev has ranged from weak to nonexistent.

Babanov’s agenda, dubbed “The Path Ahead,” is predicated on a five-step program that includes tackling shortfalls in healthcare, boosting national security, cutting back on the harassment of entrepreneurs by officialdom and designing a more effective foreign policy.

In addition to kompromat, political observers are also seeing the deployment of what are euphemistically called “administrative resources.”

Kairat Osmonaliyev, a member of the Central Election Commission, said that official complaints from candidates include allegations that college students are being pressured into voting for Jeenbekov.

During a stump meeting in the Naryn region on September 22, Babanov articulated his concerns in more detail. “In every village, in every district, mayors and other public officials are working with the population, campaigning,” he said.

Among the officials that have publicly endorsed Jeenbekov are deputy prime minister Duishenbek Zilaliyev. Calls for his resignation for abuse of authority have gone unheeded.

In an even more egregious case, documented in a secretly produced recording, a teacher at the Kyrgyz State Law Academy can be heard threatening students with expulsion unless they vote for Jeenbekov. Prosecutors say they have initiated a criminal case over the incident.

Babanov also complained that he had been reprimanded by election officials about some of his election posters, which vote organizers said featured pictures of people who had not given permission for their image to be used.

“In one photo there are two people looking at me. One of them is then Osh governor [and rival candidate] Jeenbekov, and the second is a minister of emergency situations that I appointed myself. Before any campaign material is produced it has to be approved by the Central Election Commission. They themselves authorized me to put up these posters, and [later] they issued me with a warning,” Babanov told the crowd in Naryn.

Political consultant Svetlana Moldogaziyeva said that surveys indicate that Babanov is drawing support from younger voters, in the north, where his following is greater, as well as in the south. Jeenbekov is presumed to be hugely favored by administrative elites, but his association with the incumbent ruling party could act against him, Moldogaziyeva opined.

“There are now a lot people set against Jeenbekov. They are not opposed to him personally. Rather, they are against the ruling authorities, which they have gotten sick of. And yet Jeenbekov is, in fact, actually quite measured, restrained and reliable. But young people prefer somebody more energetic, like Babanov,” Moldogaziyeva said.

Moldogaziyeva speaks for an indubitably huge cross-section of the electorate, however, when she expresses disparagement for the entire process.

“It is clear that we are not choosing the most deserving candidate — just the lesser of two evils,” she said.