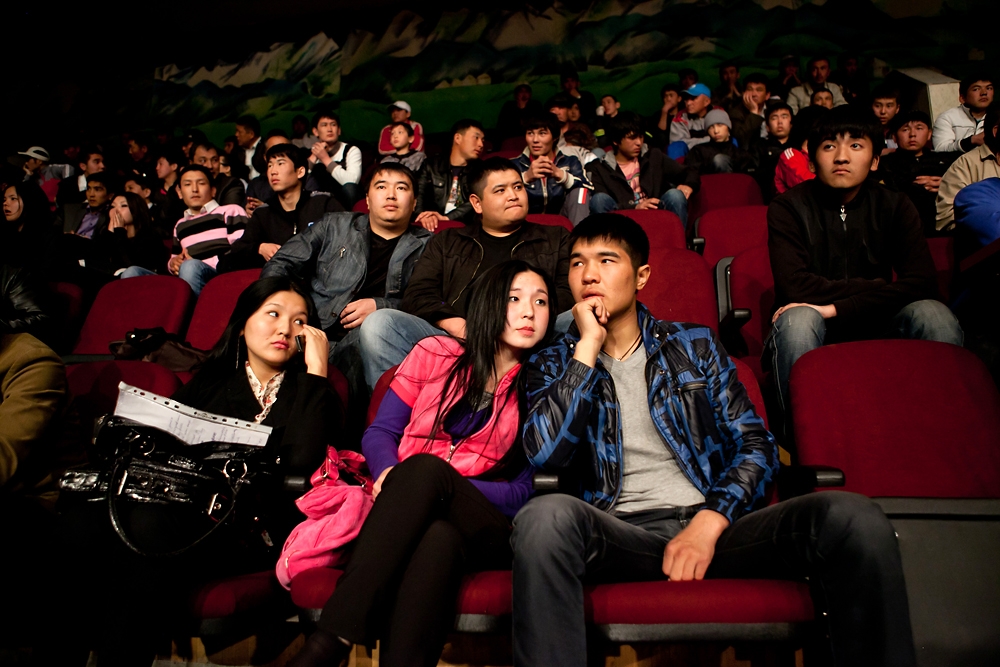 What do they know about sex? (Photo: David Trilling)

The pamphlets, sponsored by foreign donors, including the United Nations Children’s Fund (UNICEF) and GIZ, the German development agency, have been in circulation for years. (They can be viewed online here.)

Galina Chirkina, head of the Alliance for Reproductive Health, which publishes the brochures, told EurasiaNet.org that the outrage from self-styled “guardians of morality” caught her organization by surprise. “Teenagers don’t have any information [about sexual health] and they end up looking for it in dubious places, like on the Internet. Our idea was to answer their questions professionally,” Chirkina explained.

Research conducted by UNICEF in 2008 found that few parents in Kyrgyzstan talk to their children about puberty or sex because of their “mentality and shame.” More than a half the 8th-to-11th-grade girls surveyed “weren’t informed about the signs of puberty and got scared when they discovered them,” the report said. This year research funded by the Norwegian Helsinki Committee found Kyrgyzstan has the highest rate of teen pregnancy in Central Asia, and the fifth highest in the 35 countries of Eurasia.

Among the most vocal critics of the pamphlets is a nationalist group that purportedly represents Kyrgyzstan’s youth, Erkin El. Outspoken Erkin El representative Mavlyan Askarbekov maintains that promoting “family values” and “spiritual development” is more important than “instructions on how to have sex.” He characterized the educational pamphlets as “destructive brochures that ruin the minds of youth.”

Sex education is “contrary to the moral and ethical considerations, traditions and mentality of our people,” Askarbekov told EurasiaNet.org. Askarbekov – who has been quoted calling for the overthrow of the government, and is believed to have powerful backers inside parliament – claims Erkin El has over 15,000 members.

A group of MPs from parliament’s Committee on Education, Science, Culture and Sports, together with Erkin El, convened a special meeting on October 12 to discuss banning the sex-ed pamphlets. When the prime minister’s advisor asked participants to consider freedom of speech, Askarbekov called his critic a “mankurt,” which roughly translates into 'mindless slave,’ local news agencies reported.

Amid the heated rhetoric surrounding the brochures, the Committee has not made it clear when, or in what form, a ban might come up for a vote in parliament. Kanybek Osmonaliev, the MP who has loudly pushed a bill to ban the brochures as head of the Committee, declined to speak with EurasiaNet.org.

The pamphlet controversy is only the latest instance in 2013 in which nationalist rhetoric and talk of “morality” has influenced public policy in Kyrgyzstan. In April, for example, the Culture Ministry demanded organizers cancel a staging of The Vagina Monologues, a play aimed at raising awareness about violence against women and girls, claiming it “promotes scenes that destroy moral and ethical standards and national traditions.” In June, parliament passed two readings of a bill that would prohibit women under 22 from traveling outside Kyrgyzstan without written consent from their parents. MP Irgal Kadyralieva said she was trying to protect the Kyrgyz “gene pool” and the “morality” of Kyrgyz girls. After a public outcry, parliament adopted a watered-down "recommendation."

More recently, on October 30, authorities sponsored a regular mass wedding, featuring only young, photogenic ethnic Kyrgyz couples. Kurchubek Shabraliev, who organized the ceremony for the Ministry of Labor, Migration and Youth, told EurasiaNet.org that the event was designed “to build the family as an institution.” When asked why the state-sponsored event only supported ethnic Kyrgyz couples dressed in 'traditional costumes’ and didn’t include minorities, which make up almost 30 percent of the population, Shabraliev told EurasiaNet.org, “This is the Kyrgyz state, Kyrgyzstan, our state. Should we use European costumes or costumes of another ethnicity?”

Noted sociologist Gulnara Ibraeva believes the hardening attitudes about morality and ethnicity are a reaction to globalization. “People are trying to preserve or justify 'natural' or 'traditional' identities,” she told EurasiaNet.org. “They are trying to be 'real Kyrgyz' because being unique is a real universal human need.” Ibraeva has pushed for a broader conversation about identity politics in Kyrgyz society, but says “populists” intent on strengthening their political position have hijacked the attempts.

Civil society activists in Kyrgyzstan express concern about a trend toward obscurantism, or the deliberate suppression of facts, across Central Asia. “A popular position that is actively reproduced by mass media is that NGOs are ‘grant-eaters,’ or ‘pro-Western agents’ and so forth. Considering that parliament has introduced drafts to limit NGO activities … one has to be extremely naïve not to see this is as a trend,” Zulfia Kochorbaeva, a representative of the Association of Women's Legal Initiatives, told EurasiaNet.org.

MP Tursunbai Bakir uluu, a former human rights ombudsmen and Muslim pundit, has become the public face of this movement. He has shocked civil society groups with his public expressions of disdain for NGOs, human rights activists, and, in comments made to EurasiaNet.org last month, “sexual emancipation.” This year Bakir uluu has pushed for a bill banning so-called “foreign agents” in Kyrgyzstan, which would, like the one passed in Russia last year, severely restrict NGO activity.

Kochorbaeva says the growing appeal of an insular attitude is part of another “striking trend.” As religious observance grows, pushed aggressively by people like Bakir uluu, the state is losing its secular character. With the passion of the newly converted, a new generation of politicians and activists is deploying moral arguments to justify “dogmatic religious attacks on basic human rights and freedoms,” she said.