An event intended to raise discussion about women's issues was labelled a dangerous foreign influence. 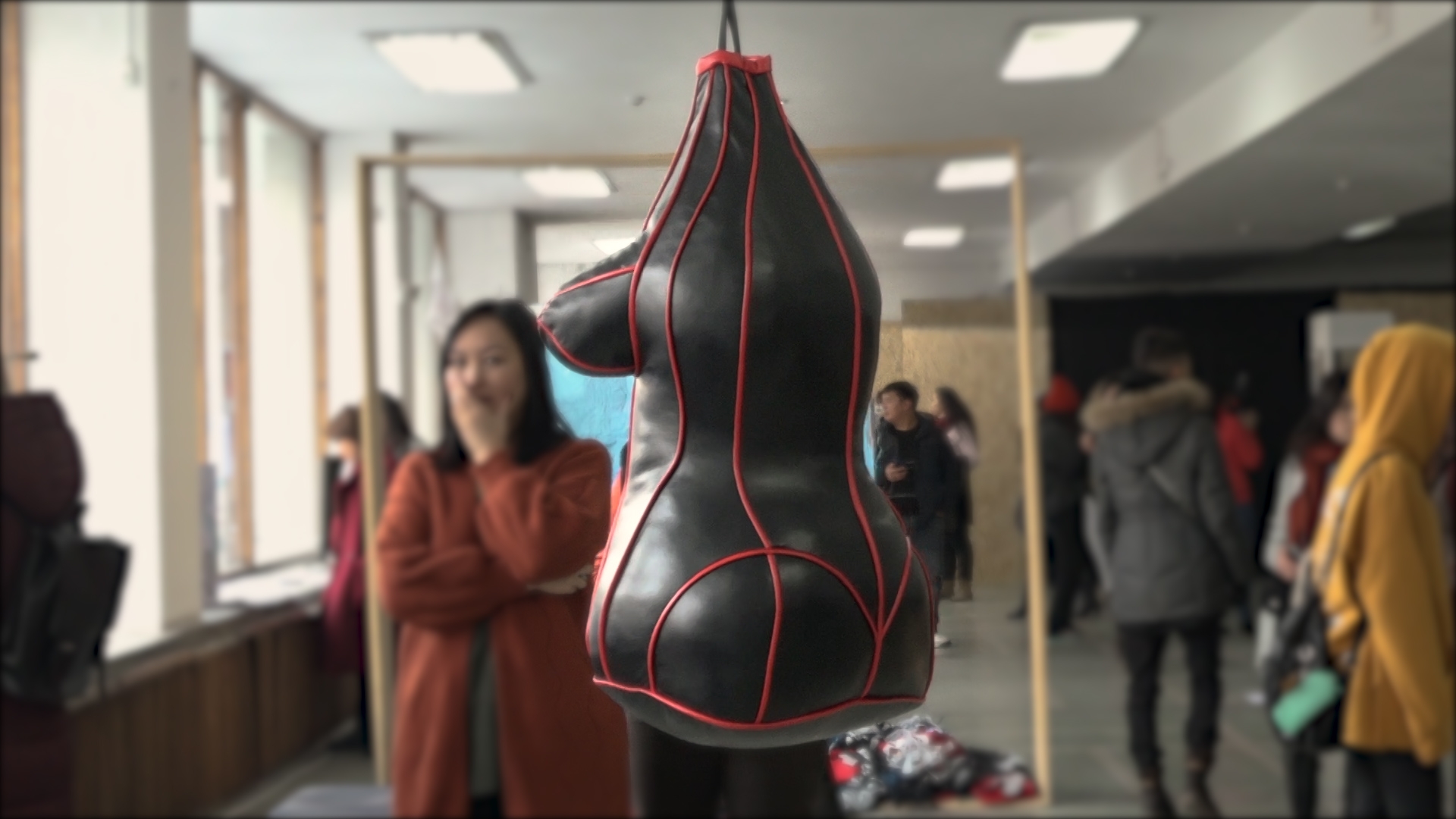 An exhibit at the Feminnale exhibition consists of a punching bag in the form of a woman's body. (Photo: Erzhan Beyshenaliyev / Kloop)

The head of an art museum in Kyrgyzstan has been forced to step down after an exhibition addressing women’s rights drew vocal criticism from a militantly nationalist group.

On December 3, one day after Mira Dzhangaracheva resigned her post as director of the National Museum of Fine Arts in Bishkek, a commission of officials from the Culture Ministry confiscated half a dozen exhibits. Organizers the maiden Feminnale of Contemporary Art in Bishkek placed signs reading “censored” in their place.

The show brought together artists from 22 countries to dwell on topics ranging from domestic violence to economic equality and was intended, according to the organizers, to challenge gender norms.

The outré quality of some of the installations was too much for conservatives to stomach, however.

What sparked most outrage was the presence of two naked female performers wandering the exhibition hall. Altyn Kapalova, one of the organizers, said on December 3 that the purpose of this performance was to drive home the idea that violence against women springs from the notion that they are forced to surrender control over their bodies. By reclaiming the female body, women are rejecting the premise that underlies the violence, she argued.

The exhibition has enraged activists like Torokan Zhunusbayev, who is a member of an unabashedly aggressive and chauvinist nationalist movement called Kyrk Choro, or Forty Knights.

“There were slogans there about how it was their right to take off their clothes, to get abortions, to get divorced. This is leading young people down the wrong road. This is not defending the rights of women but instead perverting young people,” Zhunusbayev said.

Culture Minister Azamat Zhamankulov gave a briefing on the situation on December 2, after Dzhangaracheva had stepped down, only to be hectored by a room comprised almost entirely of men, who accused the people behind the Feminnale of engaging in pornography at the behest of foreign influences.

This last point was echoed by member of parliament Makhabat Mavlyanova.

“We need to bring up our girls and young women in conformity with national values. For 30 years we have been losing our national identity and justifying this fact by citing globalization,” she wrote on Facebook.

Zhamankulov has largely come down on the side of the exhibition’s detractors.

“Art can take many forms, and every person can choose to interpret it as they wish. But when an artwork is made, the opinions of the public, their ideas, mentality and tradition, must be considered,” he said.

The Feminnale has also got some prominent defenders, however.

Elvira Surabaldieva, another lawmaker, said that it is only through the efforts of women’s rights activists that she and many female colleagues even won the opportunity to serve in parliament, through the quotas designed to ensure more gender balance in public life.

Surabaldieva said the moral panic over the exhibition also reeked of hypocrisy.

“It is very interesting that all those who demanded the dismissal of the museum director have been silent when there are people stealing millions from the national budget,” she wrote on Facebook. “We lost the battle against corruption a long time ago, but we are very good at shouting at women.”

Speaking about her decision to step down, Dzhangaracheva said she did it to protect everybody connected to the event. She also said she had received threats from Kyrk Choro.

Responding to the scandal, former President Roza Otunbayeva was incendiary in her broadside against the government. Among other things, Otunbayeva condemned the lack of facilities to shelter victims of domestic violence – a problem that was highlighted in a detailed Human Rights Watch report published in May.

“What kind of men do we have? What kind of society do we live in?” Otunbayeva asked rhetorically.

Summing the past few days development, Kapalova, one of the organizers, argued that a broader principle is at stake.

“This is not just about Feminnale. This is about the country. About freedom. About art,” she wrote.