Activists worry the country is sleepwalking toward authoritarianism. 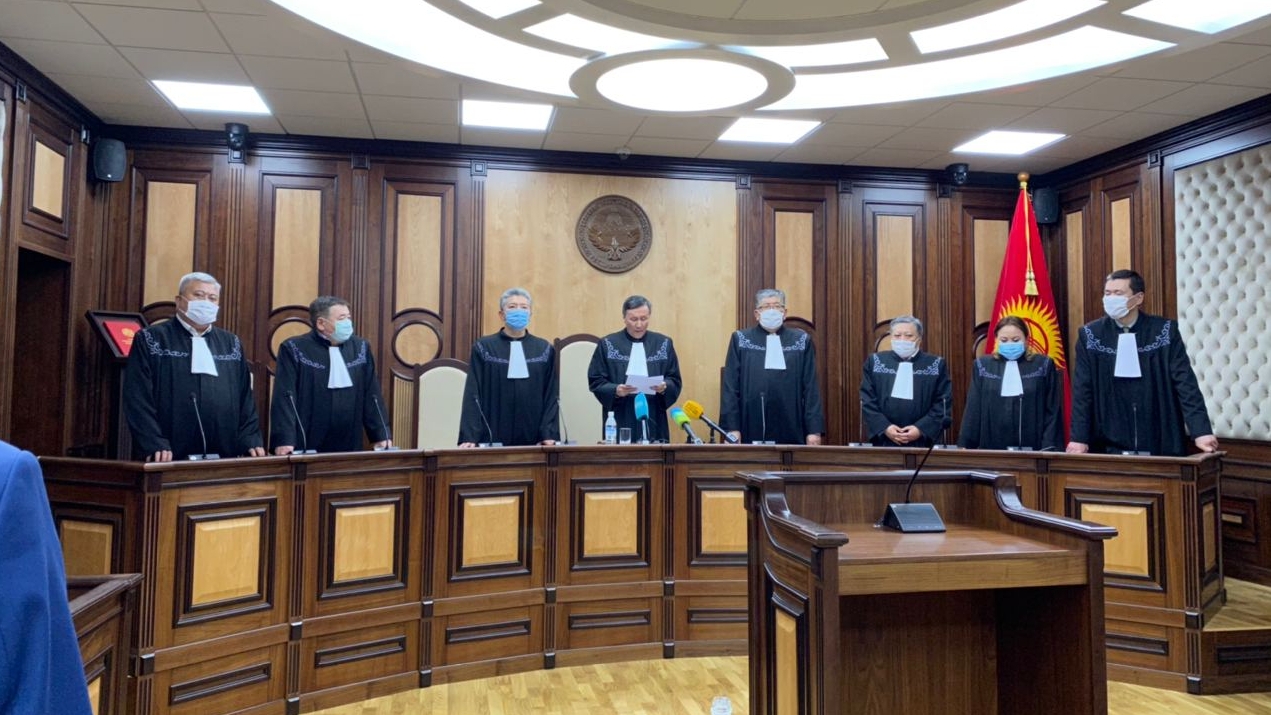 The Constitutional Chamber in session on December 2. (Photo: Kloop)

The highest arbiter of constitutional law in Kyrgyzstan has ruled that parliament acted legally when it extended its own term by up to six months – a decision that civic activists fear has ominous implications for democracy.

The December 2 ruling of the Constitutional Chamber of the Supreme Court means that a new legislature may not be elected until summer 2021, many months after the holding of a planned referendum to hand sweeping powers to the president.

Parliament’s term should have come to a close in the weeks after the October 4 election, but the political unrest that broke out in the wake of those polls culminated in that vote being cancelled.

Lawmakers on October 22 then quickly rushed through an extension for themselves during which they approved an overhauled draft constitution that could give overweening powers to the president.

Political analysts see the current parliament as an enfeebled body packed with corrupt cronies serving the interests of the prevailing power of the day. It is for this reason that activists see a new legislature as one of only a few ways out of the current impasse.

A legal petition to have the powers of parliament suspended and, accordingly, for new elections to be held soon, before any changes could be effected to the constitution, was presented by two lawyers and the leader of the Reforma political party, Klara Sooronkulova.

Sooronkulova was impassioned in her address to the Constitutional Chamber, a body on which she formerly sat as a judge.

“I urge you for the first time in the history of Kyrgyzstan to show that there is a force opposed to arbitrariness and lawlessness and for you to fulfill your mission … so that we can be proud of you and remember you as worthy people,” she told the presiding judges.

Another plaintiff, Nurbek Kasymbekov, made a more technical case, saying that lawmakers had exceeded their authority by unilaterally extending their own time in office beyond the October 28 expiration date. He also said parliament had failed to respect the principle on the separation of powers by assuming for itself a role that should belong to the Central Election Commission.

Lawyers acting for the parliament said the legislature acted in a situation of force majeure. The current epidemiological crisis, the climate of political uncertainty and lack of funds mean that holding another round of parliamentary elections soon would be an unsustainable proposition, lawmakers have contended.

“There were problems with the budget and people were demanding constitutional reforms. Moreover, the priority is to hold presidential elections, because the country has been left without leadership,” Kamila Beishenbek kyzy, who spoke for the parliament, told the judges.

The reference to a lack of leadership is an allusion to the fact that former President Sooronbai Jeenbekov was compelled to resign on October 15 amid a series of street demonstrations whipped up by the man who went on to replace him – Sadyr Japarov. Japarov has since stepped down, but only so that he is permitted to stand in the January 10 election that is widely expected to return him to the presidency.

What lawmakers want is to see the referendum to change the current constitution take place on the same day as that election. One possible scenario would see Japarov elected as head of state and his powers greatly expanded, at the expense of parliament, at the same time.

Sooronkulova sought to convince the Constitutional Chamber that the parliament had broken procedural rules in approving a proposed, amended constitution in three readings within the space of one day. By law, any such proposal should be approved over a space of more than 10 days, so that the public can adequately provide its feedback, she said.

But the Constitutional Chamber disregarded that line of reasoning and decreed that expedited measures could be justified in extreme circumstances. One judge stated that the plaintiffs were operating on a mistaken premise, since parliament had adopted a bill to propose an overhauled constitution, but they had not approved the new constitution itself.