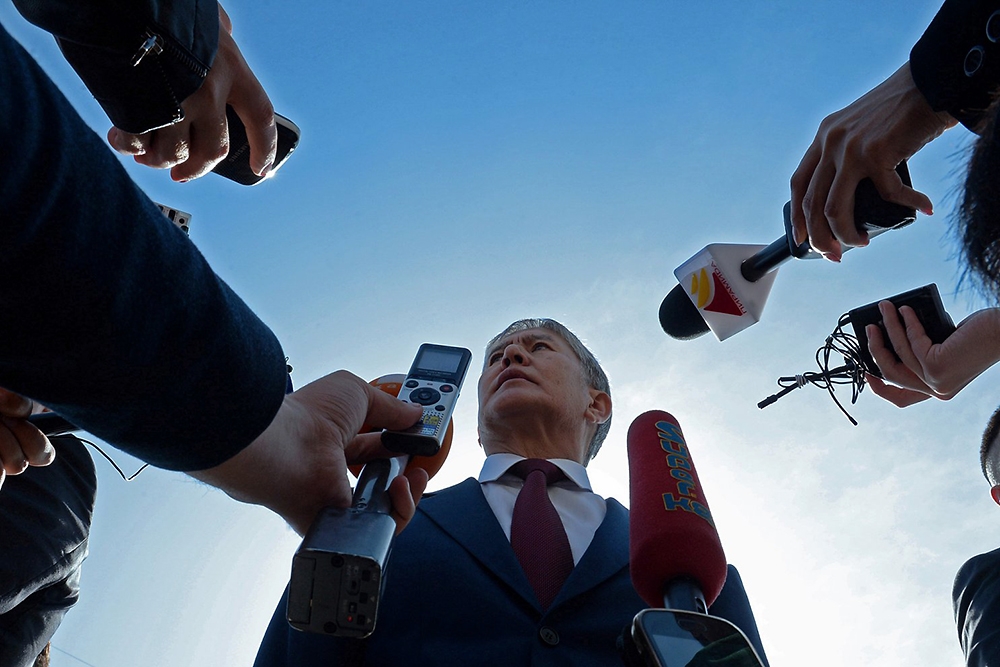 Kyrgyzstani President Almazbek Atambayev, seen here talking to the news media during a March 24 dedication of a park commemorating the 2005 revolution, says he will not seek the role of prime minister or any other national political office once his current presidential term ends in 2017. (Photo: Kyrgyzstan Presidential Press Service)

With Kyrgyzstan facing a presidential election in 2017, speculation is mounting about possible constitutional tinkering with the country’s mixed system of government.

On occasion, single-term President Almazbek Atambayev has made vague exhortations to change the constitution to weaken the power of his office. Such action would go against the authoritarian trend in Central Asia. Most, if not all, of Atambayev’s Central Asian peers have manipulated the democratic process to ensure their clasp on power, and negate the ability of citizens to hold their leaders accountable for their actions.

But Atambayev, who turns 60 this year, professes to be different. He has said repeatedly that he will not seek the role of prime minister or any other national political office once his current presidential term ends in 2017.

Recent public remarks by the pro-Kremlin leader, who even opponents admit to find hard to read at times, suggest constitutional amendments may lie ahead. Atambayev again waxed philosophical on the topic following a Soviet-style public cleanup, known as the subbotnik, in Bishkek, the capital, in March.

“Many are beginning to say Atambayev wants to alter the constitution according to his own interests. I sometimes have a desire not to touch it at all,” he said at the March 12 subbotnik. “But then, when, God forbid, ‘mines’ embedded in the Constitution go on to explode, people will say that I knew and did nothing.”

Existing legislation stipulates that Kyrgyzstan’s mixed presidential-parliamentary constitution cannot be altered until 2020. But it’s worth noting that legal provisions have not prevented the ruling elite from making revisions in the past.

The current constitution was hastily drafted in the months following the violent ouster of President Kurmanbek Bakiyev in April 2010. One of the criticisms that has been regularly leveled at the constitution in its existing form stems from how the uncertain division of powers between the president and prime minister can stoke political conflict.

During his presidency, Atambayev has appeared untroubled by this. And he has managed to see off four heads of government since being elected in 2011. The latest to fall, Temir Sariyev, stepped down following a public row over accusations of corruption.

All the same, he mused aloud at the subbotnik about potential future dangers. “Imagine there is a young president and a young prime minister,” he said. “And they can’t agree on dividing something up and a war begins between the two of them. There have been such cases in Africa.”

Many would argue that an injection of youth is precisely what Kyrgyzstan’s government needs. Atambayev has avoided reverting to the kind of egregious abuses of power that became a hallmark of the Bakiyev regime, but important systemic reforms have been neglected.

An International Crisis Group commentary published on the anniversary of the country’s April revolution summed up the situation by calling  Kyrgyzstan “Central Asia’s only parliamentary democracy,” while adding that “the system remains remarkably unchanged despite elections and upheaval.”

“Those who can leverage their connections enjoy impunity, while many ordinary people live in poverty and lack access to justice,” the report said.

Atambayev’s harshest critics believe his calls for a weaker president and a stronger prime minister and parliament are predicated on a desire to maintain such a system, or at least ensure his own inviolability under a future chief executive, someone who could possibly be a political enemy of the incumbent’s.

“I believe he wants to make the country ungovernable,” said Edil Baisalov, a former presidential chief of staff under Atambayev’s predecessor Roza Otunbayeva, who served as a stop-gap leader for 18 months after Bakiyev’s ouster.

“Then he can leverage his ties to Russia to become a kind of shadow ruler, pulling the levers in the background,” Baisalov said.

Others, such as Klara Sooronkulova, a former judge of the constitutional chamber, have refused to dismiss the notion that a leader with a reputation for unpredictability will walk back on his promise not to ease into the prime minister’s seat.

“It could be something like the Roman Emperor Augustus, who took all the institutions of the Republic under his control once he was asked to do so. He might say: ‘Is it my fault my party asked me? Is it my fault the people love me so?’” said Sooronkulova, who was dismissed from her post for opposing a government directive that made biometric data submission a prerequisite for voting in October’s parliamentary elections.

Observers say it is unlikely that any constitutional referendum could go ahead without tacit approval from Kyrgyzstan’s key ally, Russia.

In this sense, the recent constitutional shift towards parliamentarianism passed by referendum in Armenia, another ex-Soviet political hybrid under major political influence from Moscow protection, is curious.

In the Armenian case, opponents of the changes, approved in December, voiced similar suspicions to those now bedeviling Atambayev – that the amendments were somehow designed to strengthen the role of outgoing incumbent President Serzh Sargsyan.

Back in Bishkek, Ravshan Jeenbekov, an opposition figure and former member of parliament, admits the Armenian referendum is “a mystery” within the context of Moscow’s assumed preference for strongmen rulers in its near abroad. He argued that both Russia and the Kyrgyz public will need convincing that a weaker president is in their interests.

Overall, however, the former lawmaker agrees with the proposed changes. “For the last six years, we have leaned towards the presidential model and the authoritarian tendencies that accompany that model,” said Jeenbekov.

“Atambayev may be wanting to change the constitution purely to ensure his own safety and that of his property, but it would still be a good move. Our destiny is to be a genuine parliamentary democracy,” he told EurasiaNet.org.