Beishenaliyev says he has been set up by vindictive prosecutors. 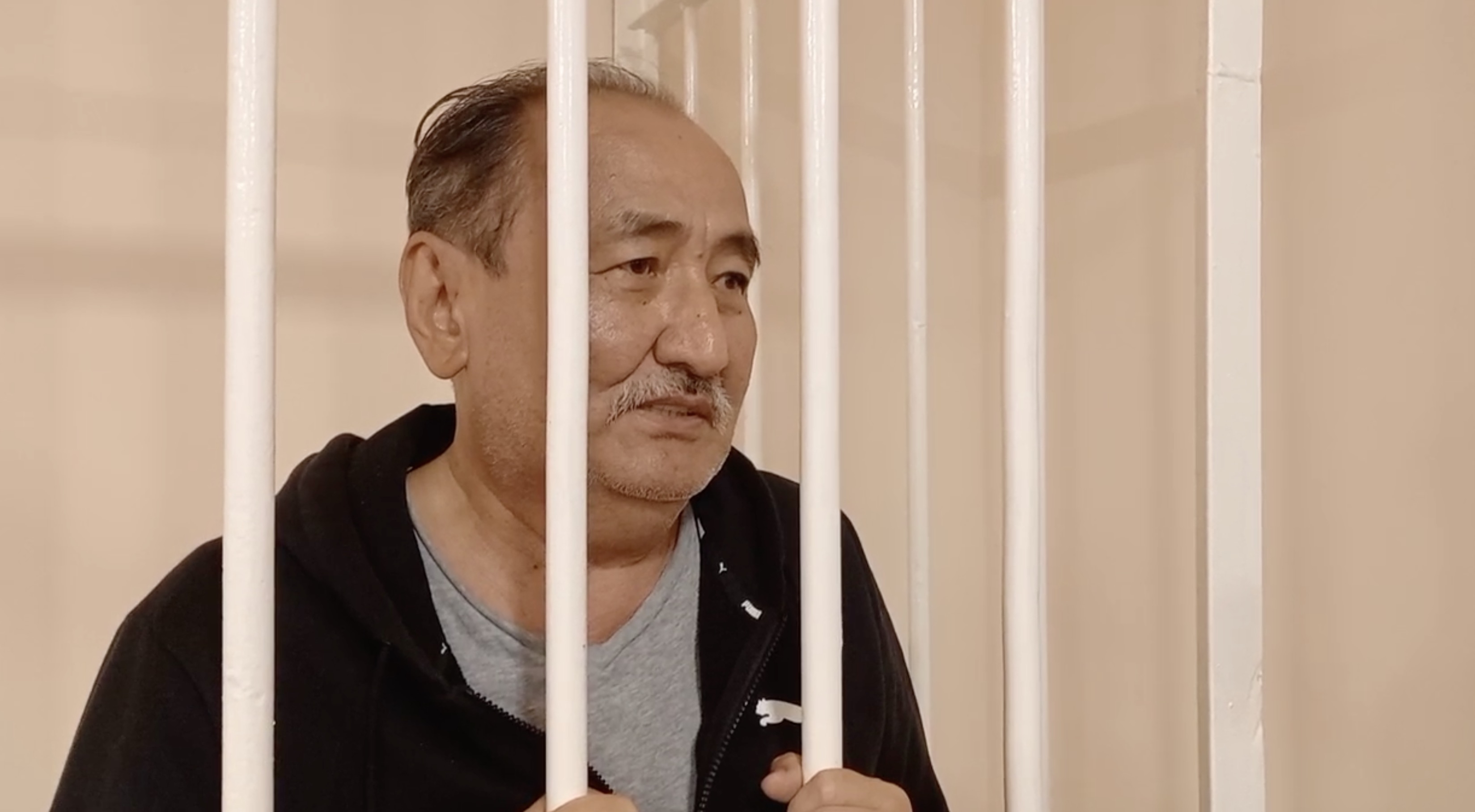 Beishenaliyev talking to reporters while hearing the charges against him in court. (Photo: Screenshot of a Facebook Live broadcast)

But things are going even worse than that for Alymkadyr Beishenaliyev. He is now behind bars.

On June 2, half a dozen rifle-toting and masked officers with the security services and the office of the Prosecutor General descended on Beishenaliyev’s ministry and put him in handcuffs. Beishenaliyev, 62, is now facing seven charges, including corruption, bribe-taking and abuse of office.

Part of the accusations are linked to claims that he bought 2 million COVID-19 vaccines in excess of Kyrgyzstan's need from privately owned foreign companies and that the health ministry paid $20 million into offshore accounts for the privilege.

Although Beishenaliyev’s increasingly erratic behavior and frequent insult-laced tirades against his critics had fueled suspicions he might struggle to hold onto his job, the arrest comes as a surprise. This is in no small part because he enjoys strong support from his friend and loyal political confidante, President Sadyr Japarov.

Japarov has not intervened to overturn the arrest, although he has offered Beishenaliyev some succor.

“I saw the news about his detention yesterday,” he told reporters. “I want to look into this myself. Find out if the case against him is fair. I have to be impartial.”

These words of moral support arrived with some practical help too. Japarov removed Beishenaliyev from his job, but pointedly did so on a temporary basis, pending the ongoing investigation. At the same time, he approved the creation of a commission to investigate the case, thereby installing people charged with looking over the shoulder of prosecutors.

Prosecutors have been put on notice in other ways too. While suspending Beishenaliyev, Japarov did the same to Kurmankul Zulushev, the General Prosecutor.

Beishenaliyev and Zulushev have been locking horns for several months now. In March, the Prosecutor General's Office warned Beishenaliyev over his peculiar and confrontational behavior. The minister was undaunted. In early April, he tried to pressure the owner of a private eye clinic with whom he has been in a dispute for many months by getting a crew of workers to unload a pile of sand so as to block people from entering or leaving the premises of the clinic.

Beishenaliyev brushed off the warnings of prosecutors with customary bravado.

“Who is this Prosecutor General?” he blustered. “I answer only to the people.”

Japarov explained his decision to remove Beishenaliyev and Zulushev from their jobs at the same time as being motivated by concern that their “personal relations” might hinder the course of an impartial investigation.

Rights activist and lawyer Klara Soorokunlova, meanwhile, has suggested that it is the president’s impartiality that should be questioned. The General Prosecutor should under the rules in the constitution only be removed by consent of parliament, but Japarov did it alone, she said.

Beishenaliyev denies all the charges against him and has described what is unfolding as an act of revenge by Zulushev. He suggested that a vindictive deputy minister might have given him compromising documents to sign as a way to entrap him.

“I happily accept that this has happened. I believe that now an objective investigation will be conducted. Kurmankul Zulushev has in his time threatened to put me in jail, and now he is fulfilling this promise,” he said after his arrest.

Zulushev has been more circumspect and has only obliquely addressed Beishenaliyev’s allegations.

“All decisions taken by the head of state must be implemented,” he wrote on Facebook. “I have never used the scales of justice without balancing things with the stone of truth.”

Since being appointed to his position in October 2020, Beishenaliyev has distinguished himself for his medically questionable stances and confrontational style. His time in office extended over most of the COVID-19 pandemic – a crisis with which Kyrgyzstan’s poorly resourced healthcare system has struggled to cope.

Last spring, just as the country was about to enter its second major wave of COVID-19 cases, Beishenaliyev earned much notoriety by recommending coronavirus patients consume a purported cure of a brew made with a poison root. One day in mid-April, he even gathered skeptical and amused journalists to drink a brew made from the roots of the wolf's-bane plant to prove that consuming it need not be fatal.

President Japarov did not object to any of this. He was the one who made the suggestion that people drink wolf's-bane brews in the first place.