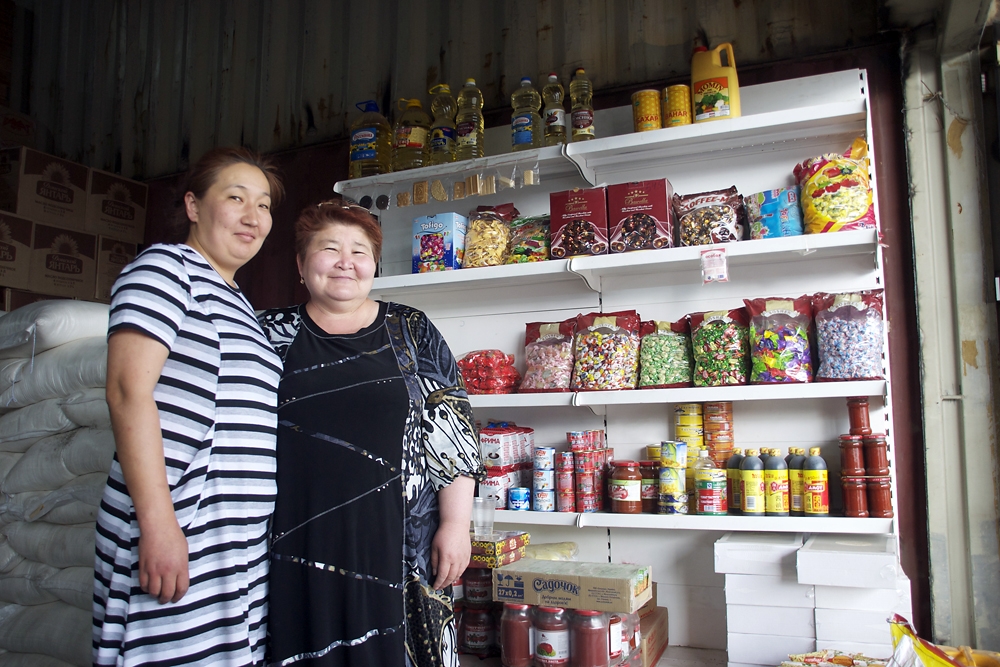 Kyrgyzstan's small business owners have been turning to microfinance loans - but at what cost? (Photo: Myles G. Smith)

Tatyana Baksheeva, a resident of Bishkek, Kyrgyzstan, is a young woman with a solid business idea and the drive to make it happen. To succeed, she first needed to shed some Communist-era baggage in order to let her sense of individual initiative flourish. But now she’s finding that Kyrgyzstan’s sketchily regulated capitalist system is giving rise to a different set of problems.

Baksheeva took out a microfinance loan of 40,000 Kyrgyz soms ($870) to start her nascent children’s activity book publishing business. “This money gave us a push to get started, and we’re very pleased for this,” she said, explaining how she used the money to print 3,500 copies of her first title. The book’s sales have gone well enough that she was recently able to finance herself the book’s third edition. Even so, she explains that she is still repaying the original loan.

In general, Baksheeva’s literacy when it comes to numbers is nowhere near as high as it is for words: she can’t really explain the terms of her loan. And therein is the problem. Lots of small-scale lenders in Kyrgyzstan have rapidly expanded activities in recent years. Some lenders are responsible, but others are not. As a result, many people of modest means and big dreams are in danger of borrowing more than they can afford, or getting caught up in debilitating loan arrangements.

Government regulators are only just starting to come to grips with the country’s microfinance sector. In late May, the Kyrgyzstan’s National Bank abruptly shuttered 94 microfinance lenders, allegedly for charging well above the industry-average interest rate. But the move may do little to cool what may be an overheating microfinance market.

Kyrgyzstan’s poor and largely rural population, along with its lax regulatory environment, enabled a boom in small loans in recent years. A microfinance institution (MFI) can be founded with only 100,000 Kyrgyz soms ($2,175) in capital, and staff need no expertise in microfinance, let alone banking. So MFIs have spread rapidly, with over 450 existing on paper, though although only about 100 are actively working with clients, according to Fatima Eshimbekova, an analyst at the International Finance Corporation (IFC), a World Bank affiliate working on microfinance sector reforms.

With so little data and a dearth of transparency, a crisis somewhat analogous to the US subprime mortgage meltdown of 2008 -- where the riskiest loans at the fringes of the market ended up sinking the entire economy -- is not difficult to picture.

Small MFIs with less capital are often more aggressive in trying to attract clients, and charge usurious rates. “This happens widely in Kyrgyzstan, where many small MFIs charge rates of 50-70 percent [per annum] on their loans. To my mind, this needs to be addressed by the central bank,” says Makhmud Saidakhmatov, CEO of FINCA Kyrgyzstan, the local affiliate of a leading non-profit MFI based in the United States.

The National Bank did not respond to EurasiaNet.org’s repeated requests for comment.

Eshimbekova at the IFC notes that Kyrgyzstan’s MFIs have doubled their loan portfolio since 2010, and while small MFIs may be making riskier loans, direct competition among the top MFIs has expanded credit even more.

FINCA, Bai Tushum, and Kompanion, three of the industry’s top players, are non-profits founded by international donors more than a decade ago. Mol Bulak Finance, the largest MFI by portfolio in Kyrgyzstan, was founded in 2008 by a former Kompanion director and quickly grew past the competition. Kompanian is a microfinance affiliate of the US-based civic development organization Mercy Corps. Meanwhile, Bai Tushum started in 2000 with the assistance of two prominent international assistance non-profits, ACDI/VOCA and Swiss Caritas.

These four MFIs account for over 75 percent of Kyrgyzstan’s microfinance loan portfolio. With many Kyrgyz still shirking traditional banking, microfinance accounts for more than 70 percent of the country’s individual loans.

Stiff competition, in addition to expanding access to credit to thousands of Kyrgyz, has begun to lay bare a rift between two models of microfinance: socially oriented and for-profit.

Saidakhmatov of FINCA draws a stark contrast, maintaining that while other MFIs push ever-larger loans on borrowers, FINCA often reduces loan requests and conducts thorough internal credit analyses. “Clients often complain about this, but in a sense this is evidence that we are doing our job of protecting the clients’ interests,” he says.

Songbae Lee, a former CFO of Kompanion, described a struggle to balance commercial and development goals, which he calls core to the sector worldwide.

“Mol Bulak […] is fully commercialized, in both the good and bad senses,” said Lee. “They are the fastest, most innovative, and most profitable.” Indeed, in addition to its staggering annual growth, Mol Bulak earns twice as much profit per customer as the other top three MFIs.

“But, their aggressiveness could be feeding over-indebtedness,” added Lee.

Mol Bulak CEO Babur Tolbaev insists that warnings about an overheating credit sector are overblown, pointing to the fact that repayment rates are still above 97 percent for all the major MFIs. “Every month we have new customers without credit histories. I believe there is room for growth, maybe not like the last two years, but there is,” says Tolbaev.

But the global credit crisis of 2008 showed that repayment rates can remain high right up until a credit bubble suddenly bursts. Borrower cross-indebtedness – when borrowers owe money to several lenders – has proven a better indicator of potential trouble. According to an IFC-funded study, cross-indebtedness in Kyrgyzstan is at least 31 percent and rising, as borrowers are tempted by ever more MFIs entering the market. Still, this figure is well below that of Bosnia, where similar trends were ignored until the market there burst in 2010.

Dinara Kachkanakova took her out her first microloan 10 years ago, borrowing 20,000 Kyrgyz soms ($422) to supply goods for a stand at a local market. Today, she is repaying a much larger 2,000,000 som loan ($42,200), which she uses to supply a wholesale stall at a Bishkek bazaar and to renovate her home. Even though she has received her loans from the respected FINCA, which strives to explain the terms to borrowers, she, like Baksheeva, the publisher, also struggles to recall them.

In the absence of an efficient regulatory requirement, the industry has tried to self-regulate. All the major players have pledged to redouble efforts to improve financial literacy among loan officers and borrowers.

These changes would inject additional transparency to the small-scale lending market, and would likely reduce risk for the sector and the economy. But they would also mean significant costs to bottom lines and growth. Mol Bulak and several other MFIs opposed the proposals and they were tabled.

Myles G. Smith is a freelance analyst based in Bishkek.