The events occurred in the same days that led to the rise of President Sadyr Japarov. 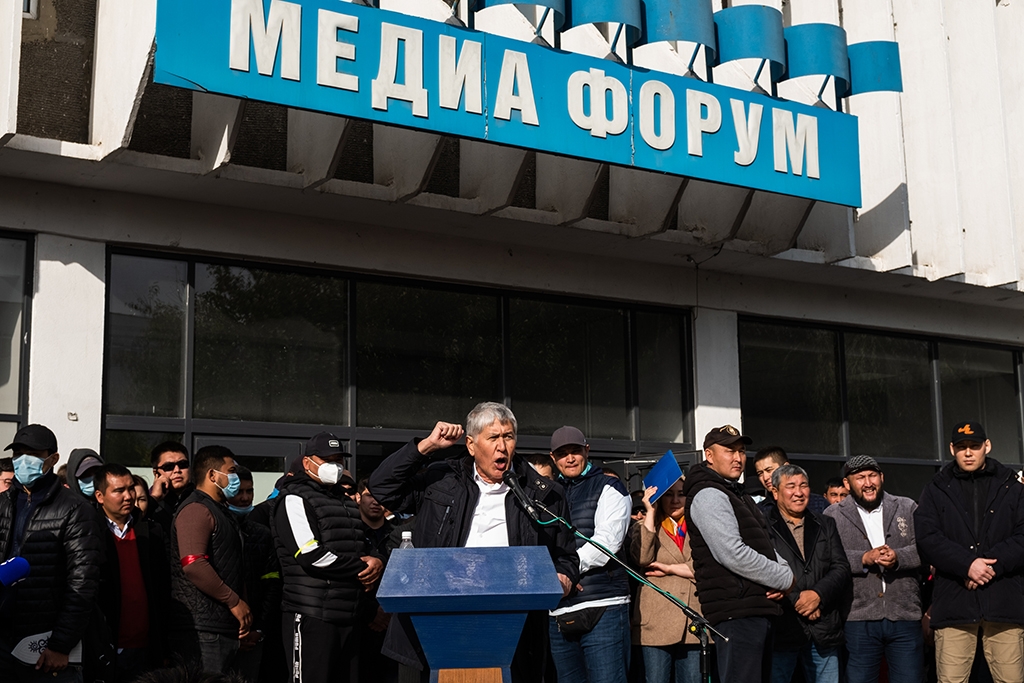 Atambayev speaking to a crowd of supporters on the day of the unrest. (Photo: Danil Usmanov)

A court in Kyrgyzstan has cleared all defendants accused of whipping up street unrest and attempting to seize power in the days of political turbulence in October 2020 that brought incumbent President Sadyr Japarov to power.

All but one of the people in the dock, a former president, Almazbek Atambayev, walked free from the courtroom on June 28.

The others accused included Atambayev’s long-time associate and advisor, Farid Niyazov, his bodyguard Kanat Sagymbayev, and the leader of the Social-Democratic Party, Temirlan Sultanbekov.

Also cleared by the court were a former Interior Minister, Kursan Asanov, and the leader of the Turan party, Zhenish Moldokmatov.

Acquittals are rare in the Kyrgyz justice system, especially where political cases are concerned, but an exception may have been made in this instance to avoid unfavorable parallels with the different fate experienced by Japarov. The only difference of note between his path and those of the men in the dock was that his campaign to seize power through the deployment of crowds on the street was successful, while theirs failed.

Atambayev’s troubles are not going anywhere, however. When he led the marches that culminated in this trial, he too, like Japarov, had only just been sprung from prison. At the time, he was awaiting trial on charges of conniving in 2013, when he was still president, to fraudulently pursue the release of a crime boss. In 2020, he was sentenced to 11 years in prison for that offense.

Sultanbekov, an Atambayev loyalist, thanked his supporters on Facebook and appealed to the authorities to show clemency to his mentor.

Political analyst Medet Tiulegenov told Eurasianet that he believed the court ruling was likely coordinated with the president's office. The decision was logical, he said, since in addition to Japarov, another person deeply implicated in the political unrest of October 2020 was the current head of the security services, Kamchybek Tashiyev.

What is particularly problematic for Japarov is that the violence that the acquitted defendants are accused of having fomented was initiated by the president’s own aggressive supporters. On the afternoon of October 9, when the trouble came to a head, stick-wielding Japarov supporters charged marchers led by Atambayev and others who had assembled on a central Bishkek square, forcing them to flee in a panic.

“An unjust court decision would have left a politically unsightly mark on the president. That would have been a clearly unfair sentence,” Tiulegenov said.