The tourist season was a disaster, with visitors down almost 90 percent. The taxman has not been sympathetic. 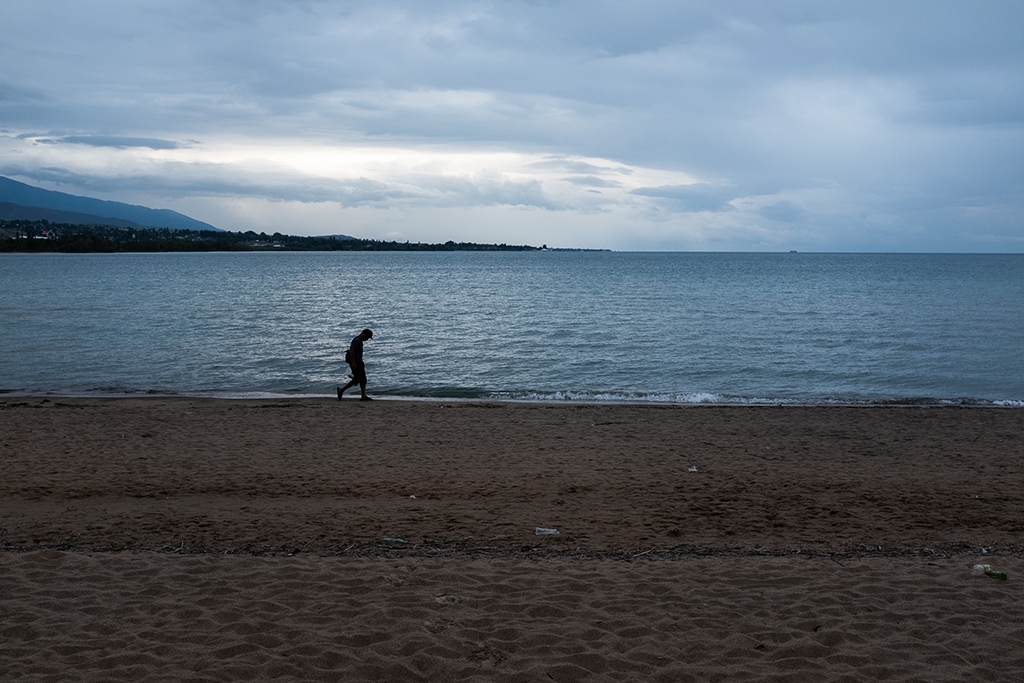 The summer season is always awaited with eager anticipation, but this year was a washout.

One afternoon in late August, three half-empty minivans idled for hours outside the bus station in the center of Cholpon-Ata waiting in hope for passengers. Nearby, the teenaged children of guesthouse owners touted offers: “We have rooms, a junior suite, with toilet and shower,” they would tell anybody passing through.

There were few takers.

Ever since the World Health Organization decreed in March that the spread of COVID-19 could be described as a pandemic, businesses in resort towns along the shores of Kyrgyzstan’s Issyk-Kul Lake have been looking down the barrel of bankruptcy and ruin. 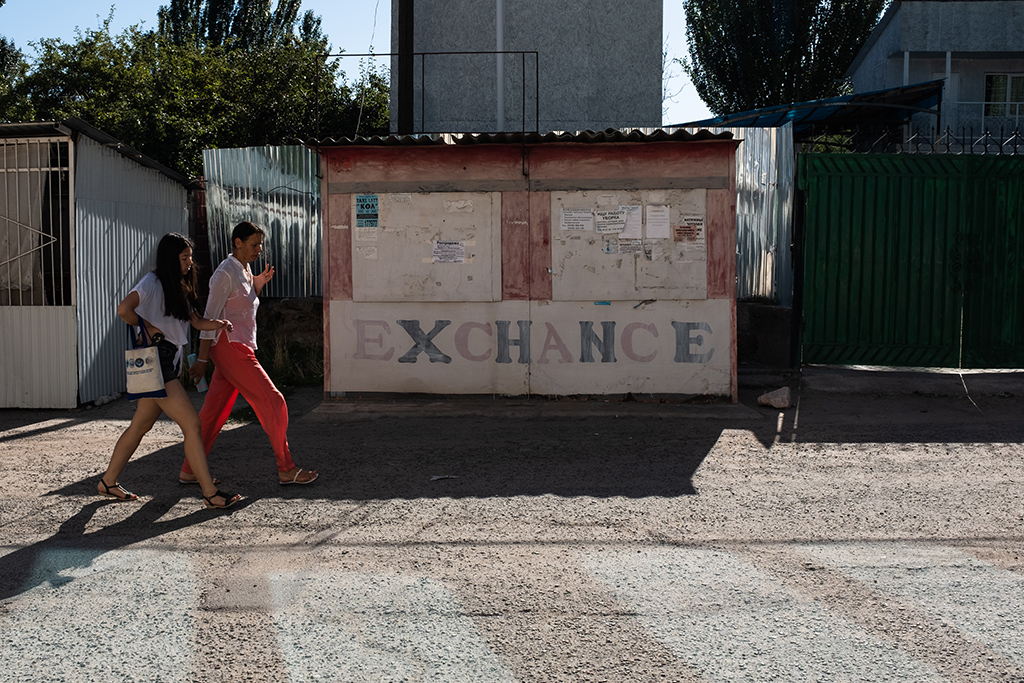 The summer season is always awaited with eager anticipation, but this year was a washout. Near all flights to Kyrgyzstan were suspended and the borders were closed as precautionary measures, meaning the large number of tourists expected from Kazakhstan and Russia could not come.

According to official figures, around 1.5 million people holiday at Issyk-Kul yearly. They come to enjoy the mountain views, clear waters and a coast that stretches to almost 700 kilometers. This season, visitor numbers were only 10 percent of the normal average. The frequent rains didn’t help.

“We’ve had no season, no people. Only in the last five days have people begun to slowly arrive,” Nurkaly Choibekov, the owner of the bus station’s Ak-Zhol café, which has been running for 40 years, told Eurasianet. “The pandemic has greatly affected us. This year we did not open our guesthouse, because it is dangerous. The virus can be passed through sheets or the bath.”

Ak-Zhol’s spacious premises are normally packed with minibus and taxi drivers in the high season. When Eurasianet visited, only one table was occupied. Choibekov stood at the entrance, holding a pink fly swatter and antiseptic gel.

“Luckily, I didn’t take out any loans and I have no debts. My children are all grownup and they live abroad. Only my wife and I live here in Cholpon-Ata,” Choibekov said with palpable relief. 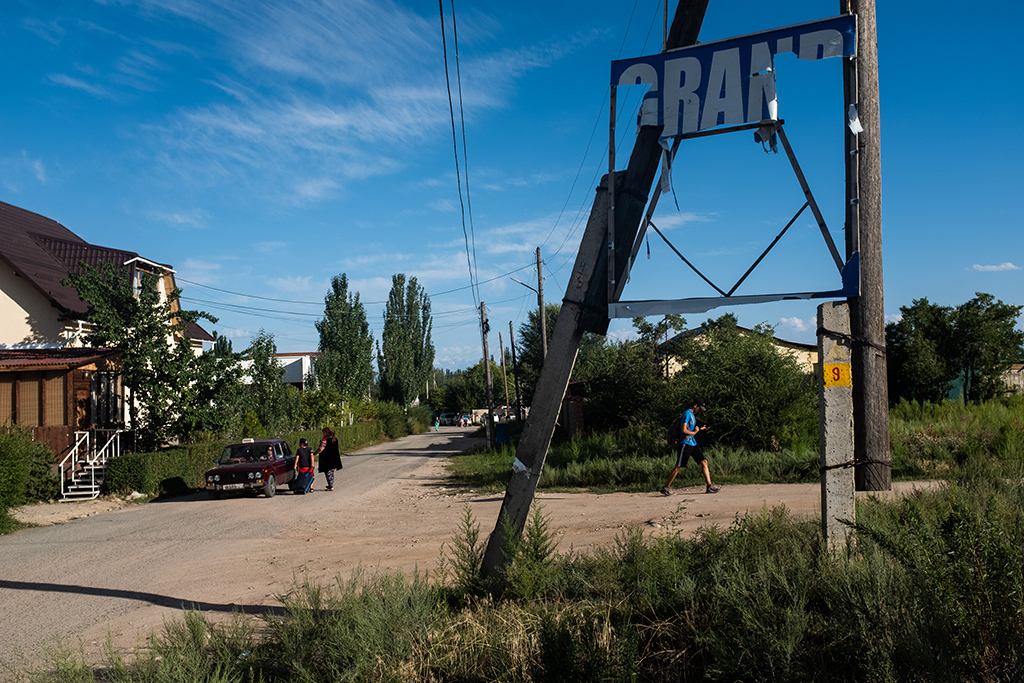 Feelings are darker along Cholpon-Ata’s Chekirov street, better known as Arbat, named after the popular tourist promenade in Moscow. In normal times, signs bearing the legend “no rooms left” are common here. Guesthouse owners were instead offering discounts of up to 70 percent. Signs on some gates offered to sell the business outright.

Arbat is popular because it is the conduit to the beach. With the pandemic, most activity has been seen on the weekends as city-dwellers take advantage of the cheap rates. On those days, Cholpon-Ata’s lakefront is a busy mingling of gaudy umbrellas, browning half-bare bodies, ringing laughter, chatter and music.

Despite appeals from the authorities to observe social distancing and wear masks on the beach, the vacationers that made it out this summer laid sun beds and beach towels side by side. Merchants hawking dried fish and beer disdained the gloves advised by health experts. 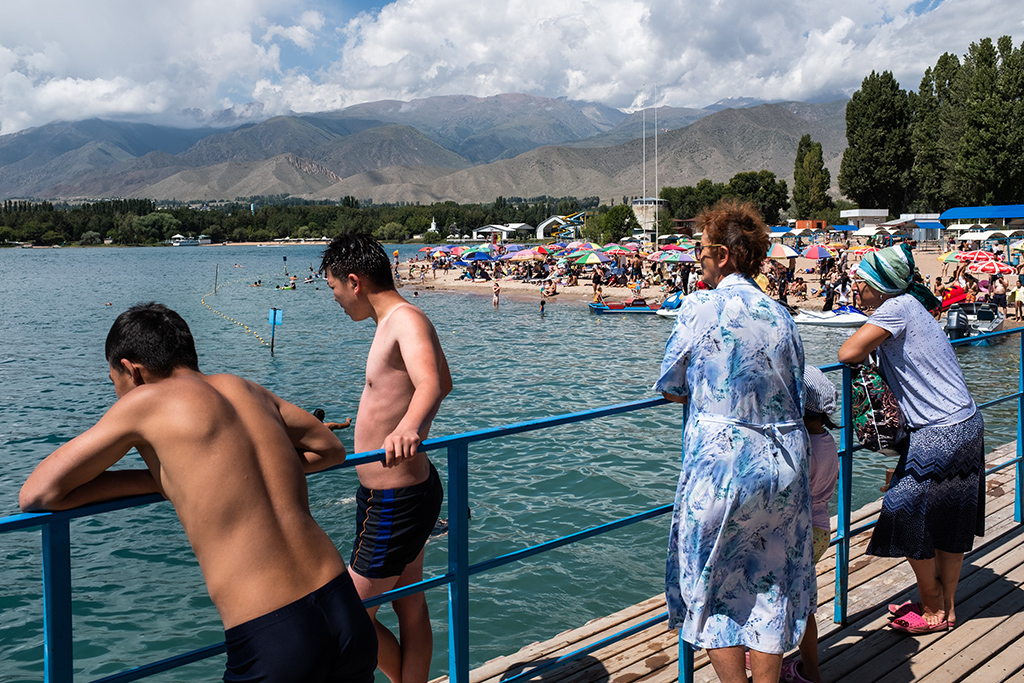 “This is my second visit. In June, I came with my husband and children. This time, I came with a friend. With these prices you can come every week,” said Nataliya, a resident of Bishkek who declined to share her surname with Eurasianet. “Last time, when we were coming to Issyk-Kul, they checked our temperature and took down the information. This time, we came in without any problems.”

But once Mondays arrived, the beaches went back to being mostly deserted. Seagulls were frightened away only by the odd seller of corn on the cob and the music blaring out of the jet ski rental store.

“It was just the last two weeks, before that it was generally dead here,” Flora Minkeyeva, the owner of the small Sayora guesthouse, which has had to drop its prices from 350 som to 150 som ($4.50 to $2), told Eurasianet.

Dropping prices have had the unfortunate effect of attracting insalubrious customers – the kind who come to get drunk and lie in their rooms, Minkeyeva said.

“Last year, we hired a woman to clean the rooms. This year, we have to clean everything ourselves,” she said.

Minkeyeva runs a nearby café on Arbat, also called Sayora, that has for 13 years been plying delicious and generous portions of traditional Dungan cuisine. Their signature plov dish was made daily on the sidewalk to induce potential customers.

Sayora made no plov this year. Only four of the 20 or so cafes on Arbat were even open. Many are terrified of bankruptcy. Minkeyeva fears she could join their ranks since she took out a 1 million som ($12,800) loan in spring to develop her business. The summer trade was supposed to cover that debt.

“I don’t know how I’m going to pay off my loans. When I took the money, nobody believed in the existence of the coronavirus, or that people would die, or that it would affect the season. If I had been told about it then, I would not have risked it,” she said.

The taxman has not exactly been sympathetic.

“Only recently, we got a visit from the tax office and they calculated that we owed 87,000 som for three months, as if we were working every day, every minute,” Minkeyeva said. “They saw this beer stand here and added on another 5,000. And it all has to be paid somehow.”

The question of taxes is a delicate one and deters many business owners afraid of reprisals from local officials from speaking to journalists. Speaking anonymously, they will reveal, however, that tax inspectors invariably arrive on the weekend, when visitor numbers are up.

“They came on Saturday, when there were a lot of guests. They counted the beds and drew up a bill,” the owner of another guesthouse near Sayora told Eurasianet. “I told them to come on Monday, when everyone had gone and it was empty.”

Business owners say government agencies are not so fussed when it is a matter of upholding sanitary standards. Instead, they focus their efforts on snap tax inspections.

The governor of the Issyk-Kul region, Danir Imanaliyev, appeared to justify this preference when he complained in late July about tax evasion, which he said was causing a major shortfall in the coffer of the local treasury.

According to official figures, Issyk-Kul region received 180 million som (around $2.3 million) in tax revenues in the first half of 2019, but the figure fell to around 42 million som in the same period this year.

But even Imanaliyev acknowledges, in seemingly self-contradicting fashion, that the collapse of the tourist industry may be to blame.

“Judging by the occupancy of boarding houses, we can say that this year, they had about 10-15 percent of last year's number of guests. And most visitors to recreation facilities come to Issyk-Kul only on weekends,” he told Sputnik news website.