Kyrgyzstan: COVID-19 brings pain, but no gain, to fitness industry

New precautions make exercising an unappealing undertaking – for those who can still afford it. 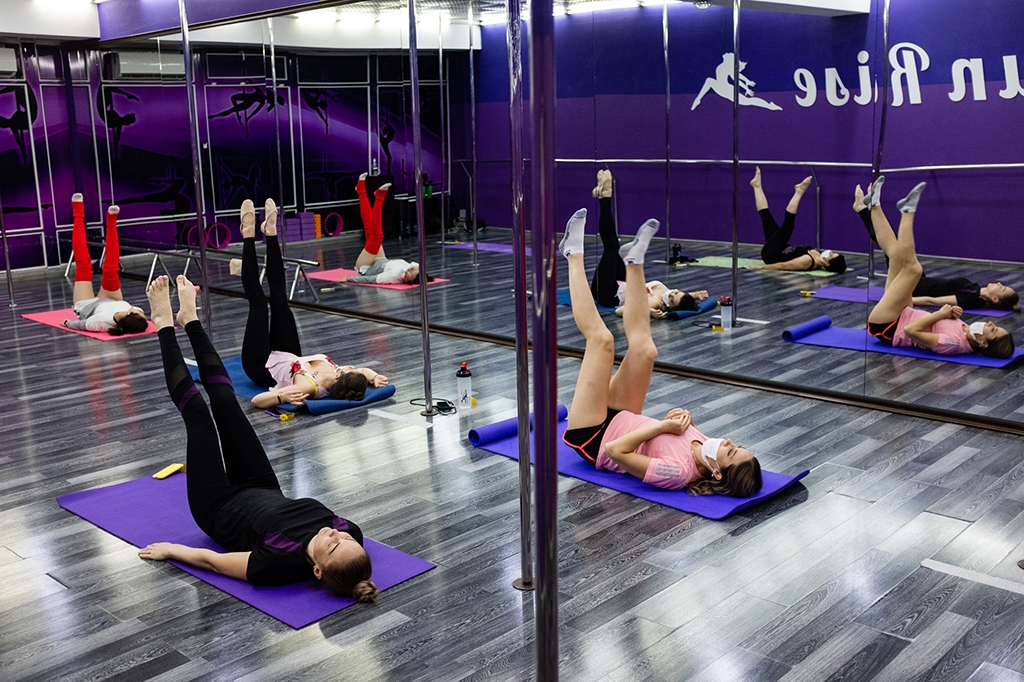 A fitness class at SunRise in Bishkek (Danil Usmanov)

Fitness fanatics in Kyrgyzstan heaved a sigh of relief on June 1 when gyms began to reopen.

The much-awaited end to the two-month hiatus, which was precipitated by the coronavirus outbreak, has been a disappointment, however. The precautionary rules still in place make exercising an unappealing undertaking.

Like most fitness clubs in the capital, Bishkek, SunRise operates out of a basement space. With temperatures in June reliably over 30 degrees Celsius (around 90 degrees Fahrenheit), any kind of exertion is a hot and sweaty business.

That is what air-conditioning units are for. But those are now forbidden. Instead, gyms are required to open their windows to ensure the free circulation of air. All that does in the summer weather of the kind that Kyrgyzstan is currently experiencing let in hot and, in some cases, dirty air.

Breaking this rule is expensive. The fine for failing to leave windows open is 13,000 som ($175). Even going to evening classes is not much of a respite as temperatures do not drop that far.

If the rule was more or less strictly enforced in the first week, discipline is fraying. Customers and trainers occasionally tiptoe up to the A/C when nobody from management is looking and turn on the unit for some relief.

Even the masks and gloves – another requirement – come off.

“It is impossible to train in masks, you sweat from everywhere, it’s unhygienic and you most likely develop acne later,” Anastasia Chernova, a trainer at SunRise, told Eurasianet. “It’s very hard to breathe, you practically suffocate. And gloves are not suitable at all, since I teach pole-dancing classes and it is easy to fall with gloves on.”

Chernova said that the rules have noticeably reduced the effectiveness of her training instructions, as she can no longer touch and stretch her students. The one small consolation is that the long period of quarantine has made customers much more aware of hygiene and many have begun bringing their own equipment from home.

There are implications for the bottom line too. Chernova used to fit about a dozen or so people into a class. Because of social distancing requirements, the number has now dropped to no more than eight.

As people exercising must be at least 1.5 meters from one another, many treadmills are necessarily vacant, meaning fewer customers can use the gym at any given time.

Meerim Dunganova, a personal trailer at NRG fitness club, says that she lost half of her clients due to the broader economic woes.

“Some of my clients have lost their jobs, some were fired, and some used up all their savings, and so for this reason they have stopped going to classes. Unfortunately, because of this, my earnings have dropped too,” Dunganova said.

There are around 1,500 officially registered sports halls across Kyrgyzstan. The country’s sports schools, soccer training clubs and other similar facilities are regularly used by around 192,000 people, most of them children.

Soccer, which is easily one of the country’s most popular past times, is still not allowed. Dozens of coaches signed a petition, published online on June 14, appealing for the government to help them out.

“It is still unknown when the activities of children and youth soccer will resume,” the authors of the letter noted. “In our current situation, we are fighting for survival, and we don’t know how we are going to make it and feed our families.”

Even from an epidemiological point of view, the coaches said, blanket bans pose the risk of backfiring, since young people are just playing unsupervised on the streets anyway.

“It would be a better way out if the boys could attend training … and be supervised by their coaches, rather than practicing on the street, where they don’t know about the risk of infection,” the letter states.

As far as the government can tell – although this is a moot point, since the testing regime is patchy – the scale of the coronavirus outbreak has been relatively modest in Kyrgyzstan. As of June 14, a total of 2,285 cases had been detected, with 1,791 people already discharged from treatment. But the dynamic of active cases has been worryingly irregular. A drop after April 19 was followed by another surge that was steeper than the first wave. Seventy-eight new cases were detected on June 14 alone, equaling the previous one-day high recorded almost one month earlier.

Officials are candid in admitting that they struggle to understand where the infections are primarily occurring. They ask for less crowding on public transportation. Bazaars are another area of concern.

“It is necessary to install … thermal imagers to test bazaar workers at the entrance to large trading complexes,” Almaz Kenenbayev, the deputy head of the COVID-19 crisis coordination committee, said in a briefing at the start of this week. “All citizens must comply with established sanitary requirements.”

What that means for gyms and other sports facilities in Bishkek is marking out common spaces to ensure proper distancing and the reliable provision of disinfectant sanitizers.

At SunRise and NRG, disinfection is carried out every three hours. Customers are invited to use hand sanitizer gel and have their temperature checked upon entry.

If anything, customers feel safer in the gym than they do getting there, as one regular at NRG, who declined to provide her name, told Eurasianet.

“When the fitness clubs began to open, I refrained from going for two weeks and trained at home instead, because I was afraid to go on public transport,” she said. “I began going to train last week, and there were loads of people on public transport, so I just remained standing.”