Japarov has appealed to the president for clemency. 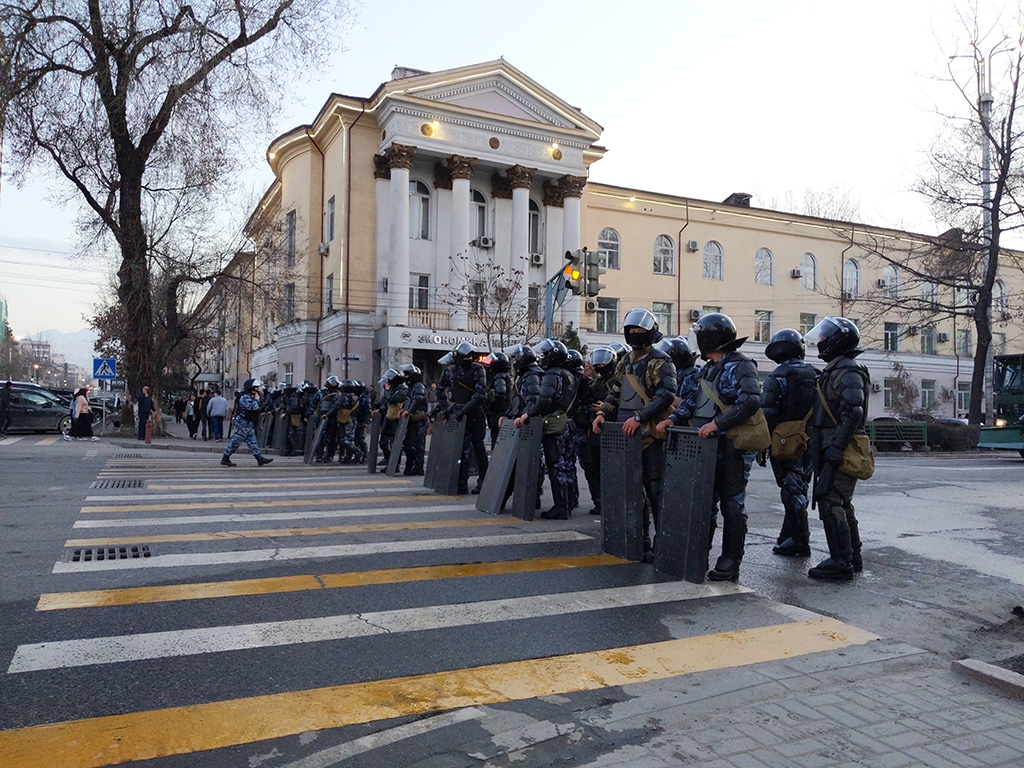 Police lined up to prevent from protesters for assaulting the White House. (Photo: Nurjamal Djanibekova)

At least 2,000 people had gathered on Bishkek’s Ala-Too square from around midday in a rally that initially appeared to be proceeding peacefully.

Japarov supporters, who travelled to the capital from various regions of the country, took to a stage to deliver numerous speeches inveighing against the government and demanding that the authorities instead turn their attention to corrupt officials.

“Unfortunately, we see corruption and smuggling flourishing in our country,” Japarov ally and associate, Jyldyzkan Joldosheva, told listeners. “Today, I met with the president and personally handed him Japarov’s appeal. I want his case to be resolved lawfully and for him to be acquitted and freed.”

While it was uncertain whether many demonstrators were familiar with the details of Japarov’s case, there was a sense among them that the former MP had simply become a casualty of a political confrontation with ex-President Almazbek Atambayev, who left office in November 2017. With another man now in charge, Sooronbai Jeenbekov, Japarov supporters seem to hope that clemency might be forthcoming – not least as Jeenbekov has fallen out in dramatic style with Atambayev, who is also now in jail.

“We have looked for justice and knocked on all doors possible. There is nobody we have not written letters to. All that is left us is to appeal to the Kyrgyz people. Sooronbai Sharipovich [Jeenbekov], listen to the demands of the Kyrgyz people,” one demonstrator, who identified himself only by the name Bakai, said in remarks to Eurasianet.

For much of the day, the rally proceeded peacefully as speakers took turns and were intermittently relieved by folk singers. 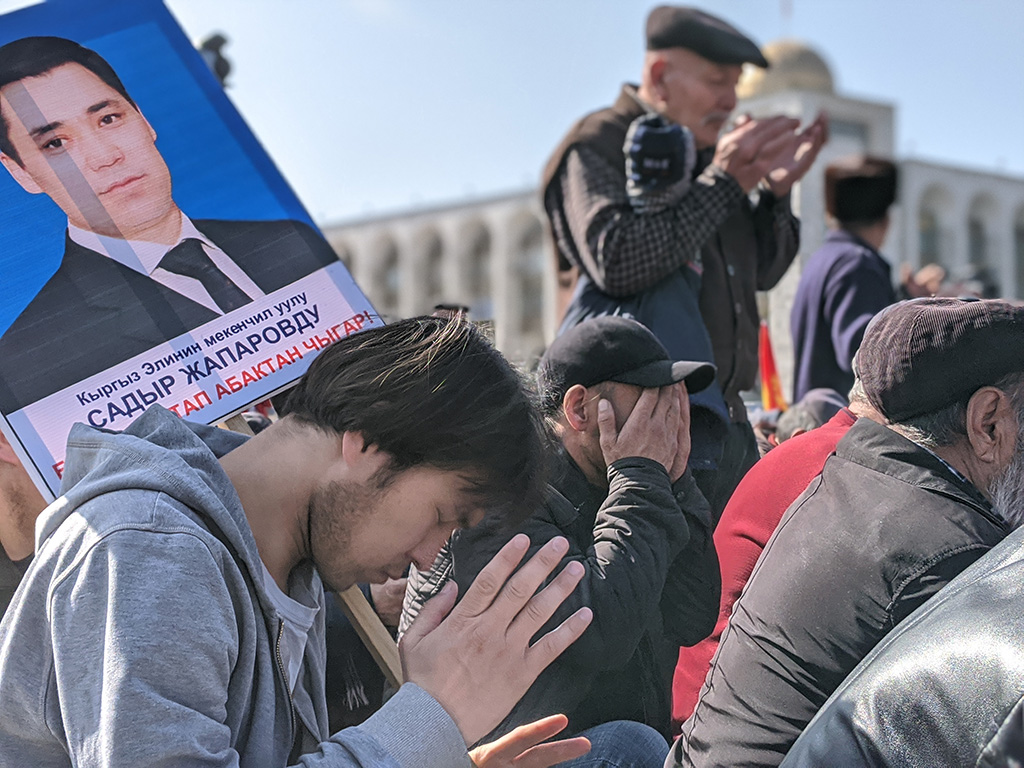 Matters appeared to escalate, however, toward mid-afternoon, when a 10-person committee approved by the crowd delivered an ultimatum to a representative of the presidential administration warning that they would take things into their own hands unless Japarov was not released within the day.

That was an early sign that discipline was weak among the ranks.

Japarov’s brother, Sabyr, used the amplification system to deliver a three-day ultimatum to the government and appealed to the crowd to disperse, but that call was not heeded. At times, squabbles broke out over who was to take control over the microphone, with some wishing to encourage demonstrators to remain in place and others pleading that the crowd leave.

As organizers of the rally appeared to lose control, several hundred decided to head toward the gates of the White House, which doubles as the parliament and the presidential administration. The advancing protesters were met by lines of riot police and were later sprayed with water cannons. Some in the crowd hurled rocks at the police.

The scenes grew only more chaotic at that stage as participants in the rally dispersed in various directions, pursued by orderly columns of riot police. The smell of gas from smoke grenades could be felt in several streets downtown Bishkek

Assorted groups of men were detained by police. There were no definitive figures as of the evening of March 2 about how many had been detained.

The entire day had begun under a sign of confusion. Japarov reportedly issued a statement from prison to plead with his supporters not to assemble out of concern that they might be egged into causing trouble.

“According to information that I have received, certain third forces have planned provocations for the upcoming event with the plan of causing this rally to go in another direction. I don’t want people to suffer [because of this],” he wrote.

Japarov did not provide any details about what he meant by “third forces.” But shortly after the rally began, a group of demonstrators unaffiliated to the Japarov gathering turned up on Ala-Too square holding banners fulminating against members of the LGBT community.

The appearance of purportedly either pro- or anti-LGBT groups at unrelated political events has become something of a routine occurrence in Kyrgyzstan and is believed by some to be a covert attempt, possibly by elements sympathetic to the government, to instigate scuffles with a view to discrediting the broader cause of the given rally. In this instance, as on previous occasions, the men were swiftly sent packing by the crowd.

Japarov has appealed for clemency from Jeenbekov partly on grounds of compassion. Since he was sentenced in 2017, his mother and father have both died and one of his sons was involved in an automobile accident. A formal request for a pardon delivered to the president in November has gone unaddressed, however.

Unruly scenes like those seen in Bishkek on March 2 used to be relatively common in the years after the 2010 overthrow of President Kurmanbek Bakiyev, but they have become rarer as the public has grown wearier of street politics and, to a certain extent, as police have become somewhat more competent in handling large crowds.

A deeper explanation for the cooling of political tempers is that Jeenbekov, and Atambayev before him, have been effective – through a combination of arm-twisting, co-opting strategies and targeted prosecutions – in clearing the field of any serious and viable opposition.