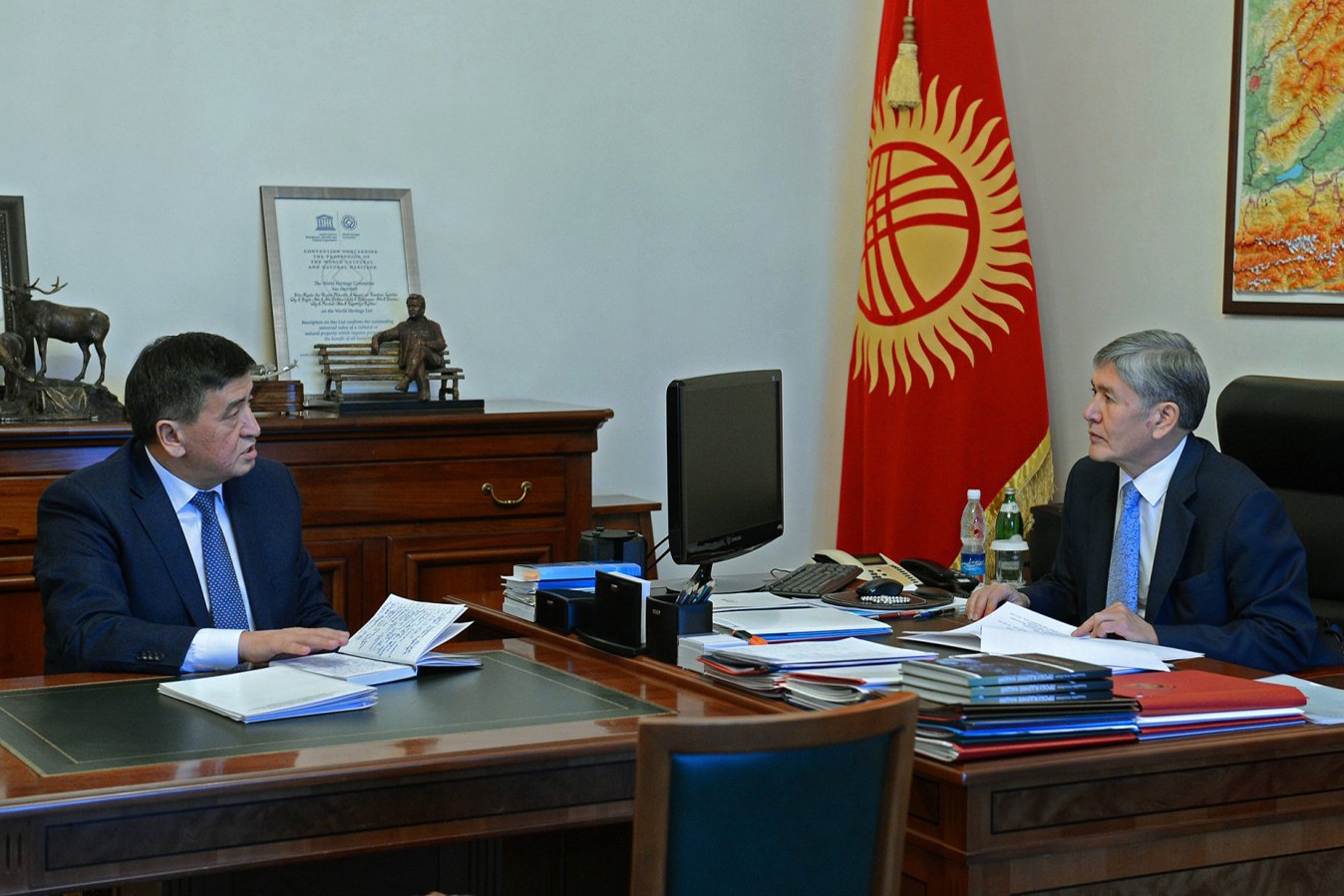 Kyrgyz President Almazbek Atambayev meets with Prime Minister Sooronbai Jeenbekov, who is mentioned in the media as a possible contender in the 2017 presidential election. Jeenbekov’s brother and former parliament speaker, Asylbek, is another name that is often bandied in the press as a potential 2017 presidential candidate. Both belong to Atambayev’s Social Democratic Party, and are considered by some to be the current president’s loyalists. (Photo: Kyrgyz Presidential Press Service)

This time next year, Kyrgyzstan should have a new president-elect. The coming election is shaping up to be a unique event in Central Asia in that, unlike contests in neighboring nations, it is still difficult to call.

Early indications suggest outgoing President Almazbek Atambayev will do whatever possible to ensure the new leader does not come from rival stock.

Despite repeatedly pledging that he will not hold political office after his single term expires, few doubt that Atambayev is eager to ensure a safe retirement in a country renowned for its turbulent politics. Critics fear his administration may exercise undue influence over the 2017 presidential election, precisely in order to achieve such an end.

Central Asia’s only single-term head of state has cut an increasingly paranoid figure in recent times, railing against even moderate criticism as the country prepares for a December 11 referendum on controversial constitutional changes that look certain to boost the present ruling circle.

“Society is afraid he is trying out the same behind-the-curtains maneuvers tested by [first President Askar] Akayev and [second President Kurmanbek] Bakiyev just before they were overthrown,” said Osmonakun Ibraimov, who served as foreign minister under Akayev.

“In the twilight of his presidency, Atambayev trusts only his immediate circle — bodyguards, drivers and so on,” Ibraimov told EurasiaNet.org. “I think he is overcome by fears he will be betrayed by someone, some mythical general perhaps.”

Atambayev’s apparent sense of insecurity was evident in the promotion to interior minister of Ulan Israilov, a former member of his personal security detail. Another former bodyguard serves as deputy head of the powerful State Committee for National Security, or GKNB, while his former chauffeur is rumored to wield significant covert influence in the parliament.

These hints of cronyism have fed concerns that the transition may be bumpy.

Some observers believe that influential advisors and others in Atambayev’s inner circle want to find a way to preserve their prerogatives and perks, thus fueling speculation the administration may throw its weight behind a loyalist candidate in 2017.

Names bandied in the media include current Prime Minister Sooronbai Jeenbekov, a southerner whose position would be strengthened by the pending constitutional changes. Jeenbekov’s brother and former parliament speaker, Asylbek, is another name that is often mentioned in the press. Both belong to Atambayev’s Social Democratic Party of Kyrgyzstan.

Sapar Isakov, the administration’s silver-tongued, baby-faced foreign relations chief, who media erroneously predicted would be parachuted into the deputy prime minister position in a recent cabinet shakeup, is another talked-up hopeful.

“The list goes on,” said Azamat Tynaev, a former journalist who now works as a media consultant. “But any candidate from inside this system would face a key challenge in a popular vote, since they have worked all this time in Atambayev’s shadow. People see them as functionaries, or may not know them at all.”

While acknowledging that “administrative resources” — ranging from glowing state media coverage to pressure on opposition candidates and persuasion of government officials to vote a certain way — could help such a figure, Tynaev said he believes that two self-promoting, oligarchical former prime ministers from the north of the country stand a better chance.

“[Omurbek Babanov] and [Temir] Sariyev were proper prime ministers in the sense they were very visible. Sariyev in particular always gave the impression he was everywhere at once,” Tynaev told EurasiaNet.org. Sariyev may have also earned support from Russia, given his prominent role in steering Kyrgyzstan’s entry into the Moscow-dominated Eurasian Economic Union.

The referendum next month, which Atambayev has presented as vital for the country’s democratic development, could prove a bellwether for the prospects of political stability in the build-up to the 2017 vote.

Only 15 MPs in the parliament voted against the law allowing the referendum to take place. At least five of those have been targeted in anti-corruption cases by authorities.

While a “no” vote could be disastrous for Atambayev’s allies, the far more likely “yes” outcome would give his 38-seat SDPK party a near-veto over future governments, thanks to an amendment requiring super-majorities rather than simple majorities to register a vote of no-confidence in the cabinet.

That single amendment would simultaneously consolidate the power of the current government and provide SDPK an incentive to remain united post-Atambayev, a factor that could be seen as a significant insurance policy for him.

If only things were that simple in Kyrgyz politics.

Only recently, the actions of a rogue party member – a former journalist Atambayev co-opted as his press secretary before moving sideways into the parliament last year – will likely provide cause for sleepless nights. Janar Akayev, who is popular among the young, social media-savvy urban types, launched a withering attack on Atambayev during a parliamentary session earlier this month, and has since spoken out in defense of the MPs facing anti-graft investigations.

When Atambayev countered by publicly assailing him on November 4 and reminding him that the party had funded his parliamentary election campaign, Akayev responded with a gnomic Facebook post later the same day. “A khan who never sees the true way is doomed to vanish,” Akayev wrote in the November 4 post, which was liked by over a thousand people. “But the one who sees the road ahead is immortal.”