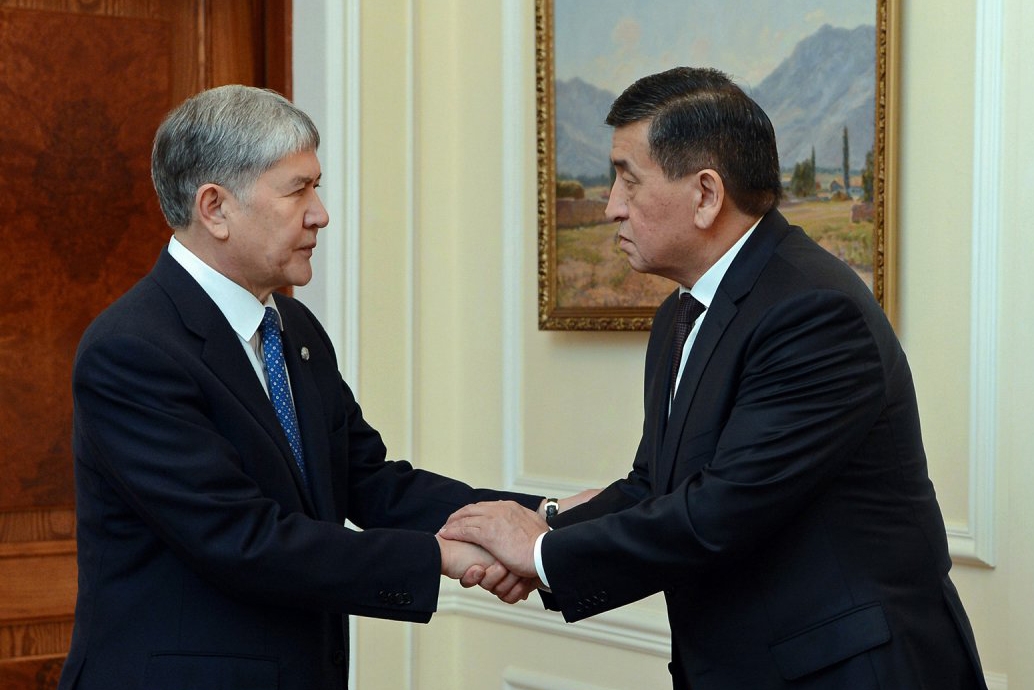 Sooronbai Jeenbekov (right) has been handpicked by the ruling Social Democratic Party and implicitly supported by President Almazbek Atambayev (left). For that reason, Jeenbekov is seen by his backers as a symbol of continuity. (Photo: Kyrgyz Presidential Press Service)

While the sharp escalation of dirty tricks has soured the mood ahead of Kyrgyzstan’s October 15 presidential election, the variety and intensity of people’s opinions are reminders of why the country continues to deserve its reputation as a haven in the region for relative political freedom.

The election is centering on two establishment candidates — all the other contestants are also-rans. The outcome remains uncertain, which is an anomaly when it comes to votes in Central Asia.

In one corner is Sooronbai Jeenbekov, a dour and charisma-lite 58-year-old southerner who served as prime minister from April 2016 until stepping down in August to begin campaigning. He has been handpicked by the ruling Social Democratic Party, or SDPK, and been implicitly supported by President Almazbek Atambayev, who is constitutionally required to relinquish power after one term. For that reason, Jeenbekov is seen by his backers as a symbol of continuity.

“We need an honest president who will bring peace. Naturally, I am for Jeenbekov, since he is going to continue Atambayev’s path. We can’t just leave what he started unfinished, can we?” Zhanyl Aliyeva, a 67-year old pensioner, told EurasiaNet.org. “They repaired so many schools and kindergartens, and pensions went up.”

Atambayev’s opponents have criticized the moribund pace of reforms across the board. The judiciary still lacks independence, corruption remains rife and while the economy has registered steady growth, hundreds of thousands are still forced to go abroad in search of work. For all that, Atambayev has presided over a period of relative political stability. Many are eager to see that predictable, gently-does-it style of leadership continued in the person of Jeenbekov.

“I like Jeenbekov, because he is a much more straightforward guy than the other candidates. He is closer to the people, he is honest and good, not crafty,” said Nazira, who declined to provide her surname.

Opposing Jeenbekov is multimillionaire businessman Omurbek Babanov, 47, whose political capital rests on his leadership of the Respublika/Ata-Zhurt party — a union between an ostensibly pro-business force and another that appeals primarily to rural nationalists. Babanov, a northerner, also had a stint as prime minister, for a year, vacating the post in December 2011. He has easily outspent all his rivals while campaigning, as testified by the colossal amount of posters, billboards and online advertising promoting his run. His relative youth, dynamism and pledges to overhaul the sclerotic public sector are seen as key factors in his appeal.

“Young people support other young people, so that is why I am for Babanov,” said Dastan, 20, a service-sector worker. “I have long supported his party, Respublika. I like him as a person, as a public speaker. He will be able to lead this country and bring some order. He will be presentable as a president, as the face of the country.”

Similar positions are an implicit rebuke of the outgoing president, Atambayev, who has shocked many voters with a series of increasingly eccentric outbursts. With only days to go before the vote, Kyrgyzstan is embroiled in an ugly confrontation with Kazakhstan, one of the country’s main investors and trading partners, as a result of Atambayev accusing officials in Kazakhstan of being corrupt.

Jeenbekov is a more sedate character than Atambayev, but he too has had his moments of crudeness that grate sections of the educated, urban electorate.

Babanov’s wealth has proven a double-edged sword, with some seeing it as evidence of a talent for handling finances and sensing opportunities, while others believe nobody in the country could have become so rich without any wrongdoing.

“My own life might not improve if Babanov becomes president, but at least something will move forward in the country,” Ansal Gasanov, a 55-year-old driver, told EurasiaNet.org.

If neither candidate manages to get past the 50 percent threshold, there will have to be a second, head-to-head round of voting, to be held no earlier than two weeks after the results of the first round are announced. With no reliable polling available, few are hazarding a prediction on the anticipated outcome.

But in an apparent indication of panic in Jeenbekov’s camp, which, in effect, includes the entire state apparatus, a whisper campaign aimed at undermining Babanov has, in recent days and weeks, taken a new and sinister form.

One potentially explosive allegation has been that Babanov made a series of incendiary remarks during a rally in a mainly ethnic Uzbek neighborhood in the southern city of Osh on September 28. Heavily edited sequences of the address that were widely circulated on messenger apps seemed to imply that Babanov was somehow throwing in his lot with the Uzbek community — a toxic implication in a country where nationalist sentiments are strong and sometimes extremely violent. The edited clip appears to have had the intended effect on some sections of the electorate.

“I was very disappointed when Omurbek Babanov made these scandalous remarks, because all you need in Osh is a spark and you will see clashes of unprecedented violence between the communities,” said Akbermet Bayishova, 23, housewife in Osh. “If you look at the story of how Jeenbekov and Babanov established their reputation and built their status, you will see that Babanov has made a lot of provocative and scandalous remarks, which is not something you could say about Jeenbekov.”

Authorities have also shown they are prepared to resort to more muscular efforts to derail Babanov’s campaign. At the end of September, the security services suddenly arrested a known Babanov ally and accused him of planning to provoke violent unrest in the event of his candidate failing to win the election.

Seemingly cognizant of the government’s willingness to use criminal cases to advance its cause, Babanov has adopted a public relations policy of passive resistance, avoiding engaging in too many counter-accusations. His patience appeared to have snapped just two days before the vote, however.