LGBT issues are increasingly being used to smear government critics. 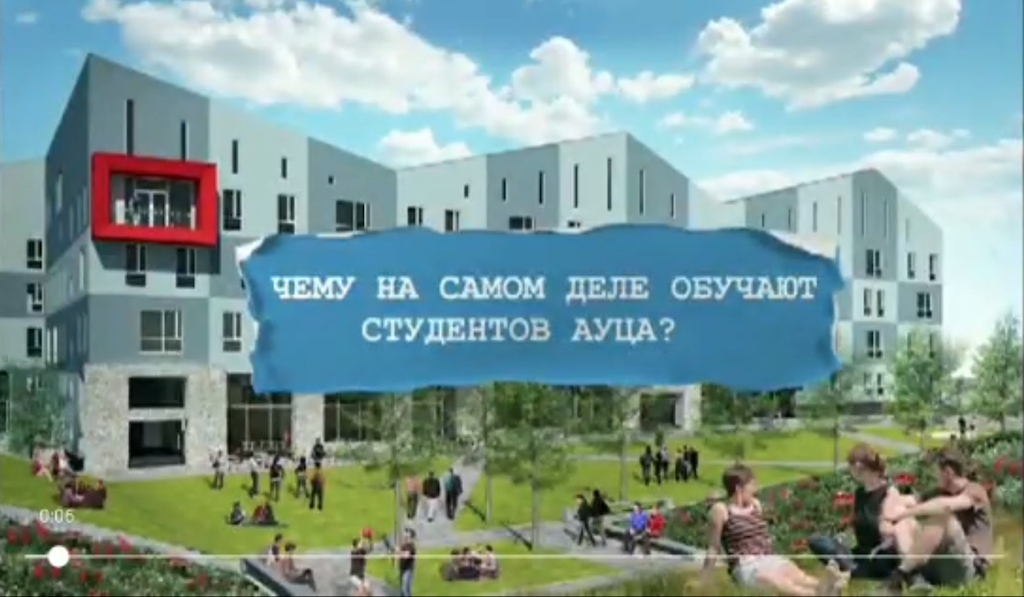 The opening shot of the attack video: The caption reads "What are they really teaching students at AUCA?"

The final days of Kyrgyzstan’s parliamentary election have seen a deployment of sinister dirty tricks that raise the suspicion that security services may be helping engineer the outcome.

A short film that circulated widely through messaging apps on September 29 featured secretly filmed video images of two male alumni of the American University of Central Asia, or AUCA, engaged in intimate relations.

The accompanying commentary contrives, in a convoluted line of argument, to use the footage as a smear of political parties rivaling the likes of Birimdik, which is widely anticipated to emerge as the party of government after the October 4 elections.

The contention is that while AUCA is purportedly propagating what the narrator describes as “immoral Western principles,” it is also serving as a feeder for parties like Reforma, Ata-Meken and Bir Bol.

“It is no secret that individual leaders and members of political formations, international organizations and NGOs are actively trying to promote these alien values into Kyrgyz society,” the narrator states.

The argument trades on the increasing deployment of homophobic themes as a means by which to discredit opponents of the ruling order. Hostility to the LBGT community has been whipped up through the years both by local chauvinists and, to a considerable extent, by Russia’s concerted efforts to marginalize and even criminalize sexual minorities.

Recent attempts to hold ostensibly apolitical rallies – such as the women’s rights parade of March 8 – have been derailed by inaccurate claims that the events were covertly intended to promote LGBT values.

A dedicated Telegram account created to showcase and spread the secret footage has since broadened its sights to target activists working for women’s rights and LGBT rights, as well as opposition politicians. As of October 3, the account has 2,000 subscribers.

The hidden camera footage leaked last month is suggestive of a sharp intensification of the strategy of using LGBT issues to undermine opposition activists. Installing and creating the footage implies a level of organization and surveillance capabilities likely only available to the security services.

If nothing else, the video has served to draw a clear line between parties the ruling elite see as anathema and those expected to become involved in a coalition government. Reforma has been explicit and robust in its criticisms of the prevailing atmosphere of corruption and cronyism. The party, however, is extremely unlikely to surpass the 7 percent vote threshold required to win seats.

Other critical parties like Ata-Meken and Bir Bol, which are also smeared in the video, are better resourced and appeared better-poised to make the cut.

The sting has also implicated the rented cottage complex where the illegal footage was filmed. The managers of the Lauzurny Bereg (Côte d'Azur) complex, which lies on the shores of Issyk-Kul Lake, have denied they were in any way involved in creating the video.

Management of the complex have said that they will through their lawyers appeal to the State Committee for National Security, or GKNB, to track down the perpetrators and have them punished.