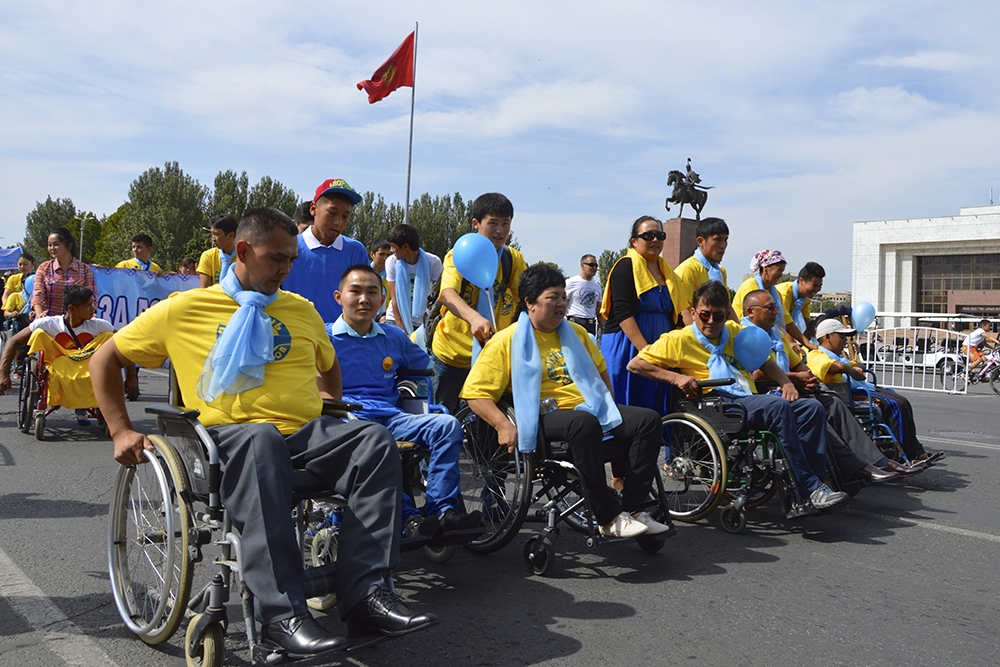 About 300 members of several disability rights organizations march and wheel through the center of the Kyrgyz capital, Bishkek, on Sept. 12. Having a physical or mental disability remains a taboo subject in Kyrgyzstan and the shame that surrounds the issue forces many into cruel and unnecessary housebound isolation. (Photo: EurasiaNet)

Every year disability organization volunteers embark on a trip around Kyrgyzstan’s Lake Issyk-Kul, on foot and in wheelchairs, stopping off at schools along the way. They seek to promote understanding and acceptance for the disabled.

Their success with schoolchildren is always immediate, but it is the adults that are the problem. Disability remains a taboo subject in Kyrgyzstan and the shame that surrounds the issue prompts many to remain in housebound isolation unnecessarily.

In a fresh attempt to break those conventions, around 300 people, many of them disabled, marched through the center of Kyrgyzstan’s capital, Bishkek, on September 12. Rally participants wore blue and yellow T-shirts and held up banners calling for a “Life Without Barriers” as they took to the streets from Bishkek Park, an upscale mall, to the Kyrgyz State University.

The reception from the general public was warm. “We support you,” shouted one woman from the sidewalk along the city’s main Chui Avenue.

The Kyrgyz Association for People with Disabilities (KAPD) and a group of Japanese volunteers from JICA, who organized the event, said their goal was to promote the theme of accessibility.

Obstacles for anybody with impairments in Kyrgyzstan, even in Bishkek, are first and foremost physical. The country’s poorly maintained streets and sidewalks are often tricky even for the able-bodied to negotiate. Potholes, high and broken pavement, the absence of ramps, inaccessible public transport, small lifts and bank machines above the reach of those in wheelchairs are only some of the problems. Even at Bishkek Park and around the university, participants in the march had to struggle over small steps and through multiple doorways.

These obstacles cheat people of equal opportunities in ways that are not always immediately obvious. “Why can’t we go to school?” asked KAPD chairwoman Gulmira Kazakunova, showing a photo of a long flight of stairs to marchers gathered in the lecture hall of the Kyrgyz State University. Her listeners, many themselves also in wheelchairs, responded in chorus: “Because of the stairs.”

Kazakunova is one of the leading organizers of the annual walk around Issyk-Kul.

“We are not looking at the quality of the service, but only its accessibility”, said Kazakunova. “We want to be able to choose our own hairdressers and our own restaurants.”

Ignorance and stereotypes about disabilities exacerbate the problem. “Many people think that we can’t study, work or have children like other people … but people with disabilities can be good husbands and wives, loving mothers, and good and caring doctors,” Kazakunova said.

There are some 160,000 disabled individuals living in Kyrgyzstan — that accounts for about 2.75 percent of the population. Many are confined to their homes as there is a widely held belief in Kyrgyzstan that disabled people are unable to live independently.

“We are here to say that we can live a normal life, but we need many barriers to be removed”, Jaladin, a trainer working for the organization Empowering Blind People, said at the Bishkek march.

Jaladin illustrated his point with a story about one of his students, a blind woman with underdeveloped muscles. “Her family ignored the fact that blind people can live independently if they are trained to use a cane,” he said. For 40 years, the woman sat cooped up indoors and was fed by her family.

“With the collapse of the Soviet Union, the belief that disabled people need help for everything and can’t live independently has increased,” Jalaldin said.

Many organizations are now working to raise awareness about various disabilities. Hand in Hand is a public association that supports children with autism and their families. In addition to offering therapy for children with autism to address behavioral issues, the organization also conducts aware-raising seminars with doctors, teachers and social workers.

“Usually parents come to us when their child is two or three years old and doesn’t speak. They ask, ‘What is wrong with my child?’ said Galya Gaas, an applied behavioral therapist at Hand in Hand.

Nazgul Irisova, also a specialist at Hand in Hand, said that some progress is being registered.

“Some parents used to think that they had made a mistake [when raising their child] and considered it shameful to have a child with autism, but this is changing slowly,” Irisova said.

Gaas and Irisova recognize the government has made efforts to help people with autism, but the potential scope for action is limited by budgetary issues, which leaves the voluntary sector doing the specifically targeted work. “Nongovernmental organizations should just work on very specific missions, such as teaching children after school,” Gaas said.

In 2014, a class opened in Bishkek for six children with autism. The results appear promising and are setting the standard for a more inclusive model of education. Around 27,000 disabled children in Kyrgyzstan are routinely excluded from mainstream education, according to specialists in the sector. Kazakunova argued that must change.

UNICEF has recently started to work on a project of inclusive programs in kindergartens. “Working with children is essential if we want to change mentalities and give them a future,” said Yukie Mokuo, UNICEF’s representative in Kyrgyzstan.

Speaking at the Kyrgyz State University, Kazakunova told of how a handful of children from a special education center began attending regular schools in the town of Karakol a few years ago. “It is a first step, the integration process is beginning,” she said.