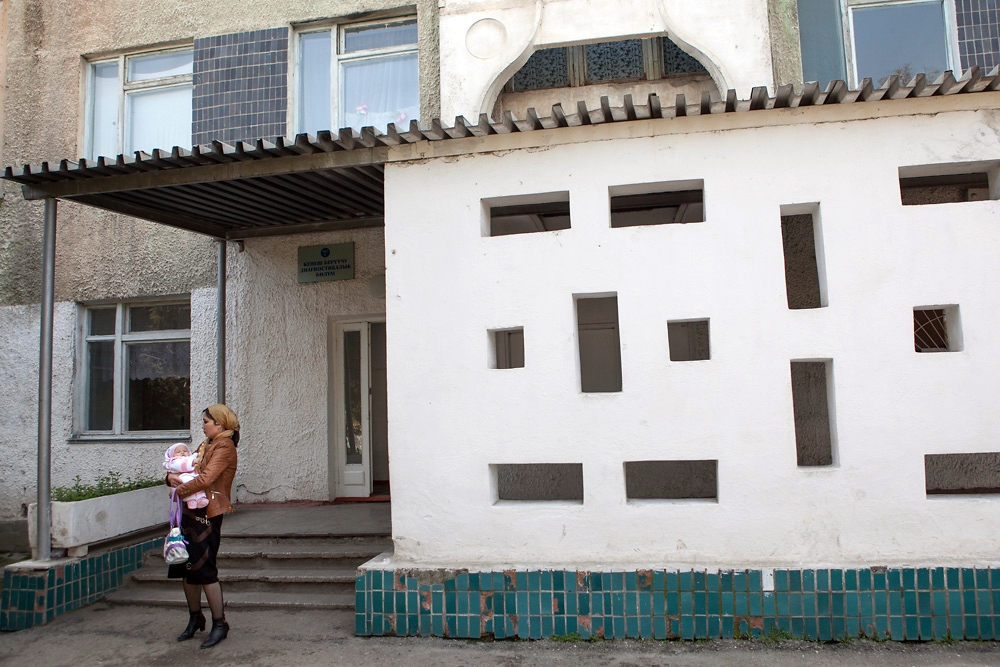 Aisha, a mother of five, takes her seven-month-old son Ismail with her when she’s out and about in Bishkek. They often travel by crowded minibus. She has refused a doctor’s entreaties to get her infant basic vaccinations, and she’s not worried he could catch a cold or a more serious infection, such as measles or whooping cough, from the other passengers because “everything happens by God’s will.”

“It’s a sin to try to prevent God’s will,” Aisha, 44, told EurasiaNet.org, explaining why she stopped inoculating her children when her fourth child was born four years ago. Describing herself a practicing Muslim, Aisha also said she was dissuaded by information she has seen on the Internet that vaccines can harm a child’s health and that some may contain pork, which is forbidden for Muslims.

Aisha, who declined to give her last name, said she doesn’t regret her decision because her younger children are just as healthy as the three older ones, who have been vaccinated.

The refusal of parents to vaccinate newborns is a growing and worrying trend, according to Zholdosh Kalilov, the head of the Kyrgyzstan’s Republican Immunization Center. Many parents don't realize the potentially “serious consequences” of failing to inoculate their children – such as life-long health complications, or even death, Kalilov said.

Over the last three years, Kalilov has seen a growing number of parents decline to give their children basic vaccines that modern medicine considers essential. He believes the refusals, which are more common in conservative southern Kyrgyzstan, are related to the growing popularity of various religions, especially Islam. “Some believe that vaccines contain pork; others see them as an attempt to prevent God’s will,” Kalilov told EurasiaNet.org.

The idea that Islam rejects vaccinations is a “misinterpretation,” argues Orozbek Moldaliev, head of the State Committee on Religious Affairs. “It is a result of the lack of education, and especially a religious education.”

All mosques in Kyrgyzstan fall under the leadership of the Spiritual Administration of Muslims, better known as the Muftiate. Zhorobai Shergaziev, head of the Muftiate’s Fatwa Department, which is responsible for issuing religious edicts, says the Muftiate makes no efforts to restrict the use of vaccinations, provided they meet two criteria.

“As long as the vaccines don’t contain pork and don’t bring any harm to a child’s health, we are not against them,” Shergaziev told EurasiaNet.org. “We’re not specialists, and we don’t stand in doctors’ way,” he said.

“But it is a person’s choice whether to do it or not,” he added, admitting that some Muslims may have different views.

That attitude infuriates doctors, like Kalilov, who faults some imams and local spiritual leaders for telling their congregations that vaccination is a sin—or at the very least for doing little to dispel such notions.

Haji Ozbek Chotonov, head of a “spiritual center” that conducts seminars on Islam and Kyrgyz culture around Kyrgyzstan, has been quoted in local media lobbying against vaccines, warning that some do not conform to Muslim standards and contain pork. “If that’s true, it’s a sin,” Chotonov told EurasiaNet.org. Chotonov added that he’s read on the Internet that vaccines may be “harmful to people’s health” because they contain heavy metals and chemicals.

Religious beliefs are not the only reason parents are refusing to inoculate their children. Venera, 28, didn’t vaccinate her two-and-a-half-year-old daughter because she read on the Internet that vaccines contain animal genes that interfere with mental development.

“These medicines will make my child stupid,” Venera argued, adding that her daughter is healthy and developing according to her age.

She says she has read many different theories about vaccinations on the Internet. “Doctors invent viruses to sell medicines. They’re playing with people’s lives,” said Venera, a Bishkek resident who is a practicing Muslim, but says her medical decisions are not related to her faith.

Inoculation in Kyrgyzstan is voluntary. Parents can decline simply by submitting a written statement. The Republican Immunization Center says that since 2011, parents of more than 3,000 babies have officially declined; the real number is probably higher.

While the tendency is worrying for doctors, there’s not much they can do, says Kalilov. “We can only try to persuade them, we can’t force them,” he said.

Immunization is especially necessary for such diseases as polio, which are again spreading in the region. With over a million Kyrgyz citizens thought to travel abroad each year for work, or about a fifth of the population, parents are risking a public health disaster for the country, says Kalilov: “This is very dangerous. They are playing with fire.”