A new party wants to be the voice of the urban intelligentsia. Alongside overhauls of the constitution, court system and security services, Reforma seeks to stop politicians with dubious work histories from obtaining state positions. 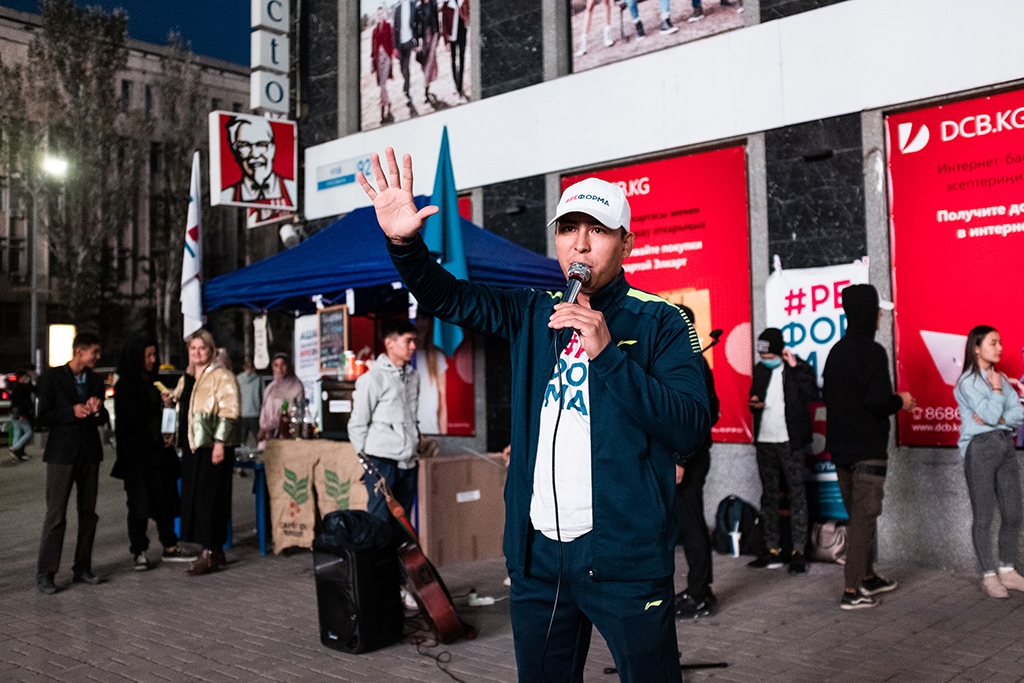 Photo: Erkin Nurbayev, a candidate from the Reforma party, speaks to a crowd in Bishkek. (photo: Danil Usmanov)

Cholpon Abdyrakhmanova, a 27-year-old candidate for the fringe Reforma party competing in Kyrgyzstan’s parliamentary race, demurs when asked if she considered herself an example of brain drain.

But Abdyrakhmanova, a marketing specialist at a multinational tech firm in Dubai, admitted that she would not be able to find her job at home in Kyrgyzstan, where “the job market is small, the economy weak, the government corrupted.”

Still, she said, she would be prepared to return to her homeland to take up a lawmaker’s seat if her party were to enter parliament.

“I love our team and enjoy working with them. I believe Reforma has a chance,” she told Eurasianet via messaging app as she campaigned in her homeland during a break from her day job.

Too radical for some, not radical enough for others and, most importantly, short on campaign funds, most observers believe it is unlikely that Reforma will achieve the 7 percent of the vote required for entry into parliament this time round.

And yet, the party has already broken new ground in its debut campaign.

On August 24, the party celebrated its successful crowdfunding of over five million som ($63,000), the sum required by the Central Election Commission as a deposit from all parties competing in the vote.

A fully itemized list of the sources on the contributions published on the party’s website indicated an unprecedented transparency in a country where sources of party campaign funds are opaque.

One journalist known for her spiky line of questioning, Mahinur Niyazova, demanded to know, half-joking, why colleagues that had recently borrowed money from her had ponied up contributions to the cause.

Reforma's campaign pledges differ strongly from most of its competitors.

Alongside overhauls of the constitution, court system and security services, the party has promised to lobby a law on lustration, which would prevent politicians with dubious work histories from obtaining state positions.

Party leader Klara Sooronkulova is a former judge of the Supreme Court’s constitutional chamber who was dismissed in 2015 after she delivered an opinion that a law on mandatory biometric registration was unconstitutional.

She has since headed a non-profit and made two unsuccessful attempts to enter the political fray. The first was as a candidate on the Ata-Meken party list at the last elections and the second as secretary for the party of a controversial nationalist former mayor of Osh, who has lived in exile since 2014.

Sooronkulova told Eurasianet that Reforma was “a youth party, with decisions made as a team,” contrasting strongly to the leader-centrism characteristic of other parties.

The nature of her dismissal and her observations of the political system since have only confirmed her perception of “a system rotten to the core,” she said. To change that system “we need to fight for power and be in a place to influence decision-making.”

The road that brought Abdyrakhmanova, a graduate of Moscow’s prestigious Higher School of Economics, to a position on the party list began when she shot to social media fame last year after asking President Sooronbai Jeenbekov an uncomfortable question while he met with compatriots on a visit to Dubai.

The trip came after hundreds rallied in Bishkek to demand that the government act on the findings of an explosive media investigation into a major contraband and money-laundering network.

Abdyrakhmanova told Jeenbekov that one of the targets of the investigation, a former deputy customs chief alleged to have bankrolled Jeenbekov’s 2017 election campaign, owned property in Dubai worth more than $12 million. She then asked the president whether the authorities were prepared to initiative their own probe.

“I felt a personal attack [on] my future and the future of thousand my peers who is working hard outside of Kyrgyzstan, sending money to support their families and believing to return in future,” said Abdyrakhmanova, speaking in English, as she described the sensation of reading about the investigation, and the rallies it triggered, from afar.

“This system and people involved in corruption are stealing our future. Jeenbekov didn't show his position on these investigations; he didn't want to be involved.”

The president’s dead-handed response to her question shocked internet users and helped make video footage of the exchange go viral.

“You live here, so you can find this address and go there, respected younger sister. By doing that you will help our investigative organs. OK?” he offered.

Shortly afterwards, the former deputy customs chief, Rayimbek Matraimov, was questioned in relation to the allegations, but released without charge.

At these elections, neither Matraimov nor Jeenbekov are competing, and yet many observers are reducing the contest to an arm-wrestle between the two as the president enters the second half of his single constitutionally permitted term and the power-broker plans for life without him.

Jeenbekov’s younger brother, Asylbek Jeenbekov, is a key figure in the Birimdik party, while Matraimov’s older brother, Iskender Matraimov, is a candidate for the Mekenim Kyrgyzstan party that observers argue is a vehicle for family interests. Both parties are well-resourced and have billboards dotted across the country.

One Mekenim Kyrgyzstan billboard that has aroused mirth and indignation in equal measure promises the party will “bring gray businesses out of the shadows.”

Reforma has few billboards and has seen doubters question its muscle in the regions outside Bishkek, where the vast majority of the electorate lives.

The party has also had to contend with what often appears to be disproportionate scrutiny, both from the state and from some Bishkek residents that it might reasonably consider as part of its electorate.

Sooronkulova told Eurasianet that party sponsors have been pressured by state financial organs. Members have been put under surveillance and, in some cases, questioned by police.

Its critics at the other end of the spectrum accuse it of pulling its punches.

One enthusiastic participant of the antigovernment rallies that Reforma has associated itself with told Eurasianet, on condition of anonymity, that she believed the party had “softened its edges in order to become the chosen [officially mandated] opposition.” She has opted, instead, to tick the field on the ballot that reads “against all” – a protest option for those dissatisfied with the parties on offer.

In some cases, members have turned bad press to their advantage. Reforma campaign manager Esen Rysbekov came under fire after a Maybach car registered under his name was involved in a high-profile collision in Bishkek.

The construction business owner, who was not in the car at the time of the crash, insisted that he had acquired the car as a replacement for cash in a property transaction. At a recent campaign event, he sported a party-branded T-shirt reading “I don’t have a Maybach.”

Niyazova, the journalist, who has been critical of the party’s missteps despite having friends in its ranks, told Eurasianet that Reforma’s members should get used to the tough love.

“Parties that talk about how clean they are will attract more questions, because with the other parties, everything is already clear,” said Niyazova.

Those parties, she said, are the parties of “thieves and corruptionists.”