The bill appears intended to force independent activism out of existence 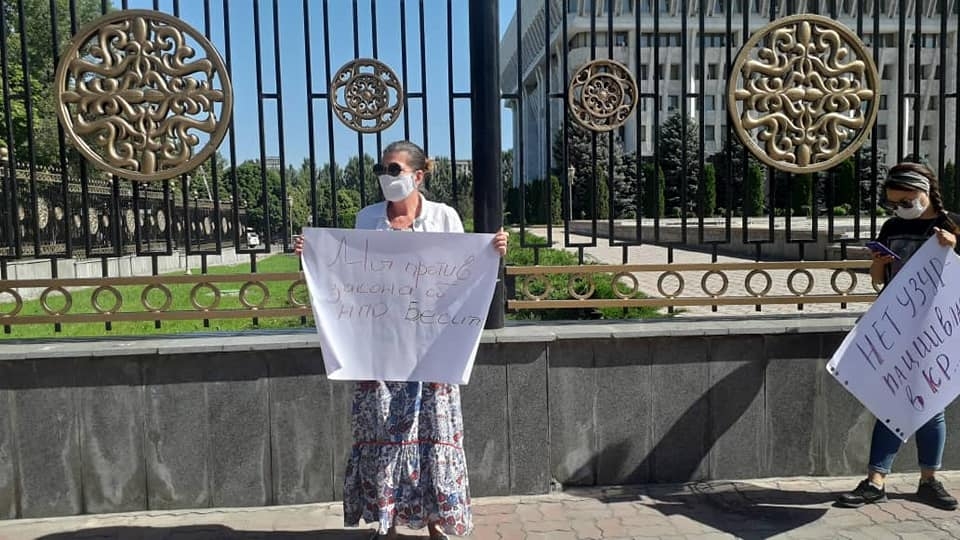 Activists rally outside parliament in protest at the draft bill. (Photo: Facebook)

Parliament in Kyrgyzstan on May 22 resumed formal scrutiny of a draft law that experts believe is designed to hobble the work of independent civic activists.

And with coronavirus-related restrictions on their side, the legislature’s largely government-loyal members were able to hear discussions at the public forum with almost no interventions from the very kinds of nongovernmental groups the law would hurt.

The bill would oblige NGOs to engage in more exhaustive reporting on their finances than is currently required, draining the often-small organizations of their already depleted human and financial resources. If the law is adopted in its current form, a government portal will be created to store all the information provided by NGOs.

The draft legislation was put forward by six MPs in December and has already passed one reading with only a modicum of discussion. It is unclear when the second and third votes required to turn the bill into law will take place.

The backers of the proposed law claim that their intent is to enhance public confidence in non-profit organizations by ensuring transparency. This explanation convinces few, however.

Even one of the backers, MP Marlen Mamataliyev, withdrew his approval and admitted in an interview to RFE/RL’s Kyrgyz service, Radio Azattyk, that he had not actually read the bill.

“I was told that the bill was aimed at stopping gay pride parades. They said that these events are being held and that they need to be stopped. I am personally against gay pride parades. I don’t want my children to grow up in a state like that. That is why I signed the document,” he said.

In January, a coalition of more than 100 non-profit groups slightly more familiar with the contents of the bill submitted a petition to parliament to drop the proposal. They described the plans as discriminatory and contrary to the principles of democracy.

This week’s nominal public consultation exercise, however, has been held away from the eyes of most directly interested parties. Citing coronavirus prevention measures, only the first 60 registered people were permitted to attend. Those that did get in included MPs, representatives of the United Nations, the European Union, the Adilet legal rights group and some other local organizations.

“I attended a public hearing of the Committee on Social Issues of the Parliament to present the UN’s position on draft amendment law that imposes an onerous burden on [civil society organizations]. Two UN Special Rapporteurs have advised against the amendment. I urge parliament to seriously reconsider,” Ozonnia Ojielo, the UN Secretary General’s representative in Kyrgyzstan, wrote on Twitter.

Activists were especially angered that they were unable to attend the hearings, which many said should have been held after stringent restrictions limiting the number of people that could attend public events had been eased.

“According to the government, there are 26,000 NGOs in Kyrgyzstan, but today there are only 60 here. This is less than 1 percent of all non-profit organizations,” said lawyer Iskender Kakeev, from the Adilet legal clinic.

Some activists, from the Bir Diuno rights group and representatives of women’s crisis centers and disability charities, registered their unhappiness by staging a rally outside parliament, demanding that the bill be recalled. They were eventually dispersed by police, who cited quarantine rules as motivation for clearing the street.

“Social NGOs, like us, like crisis centers, children's centers, and places working with people with disabilities were not at the meeting,” Tolkun Tyulekova, a participant in the rally and the director of the Association of Crisis Centers for Women, told Kloop.

Tyulekova complained that the bill was patently unfair, inconsistent and hypocritical.

“The government, religious organizations and political parties also receive grants. But why is such a selective approach specifically adopted for NGOs?” Tyulekova said.

Champions of the law are to be found among openly chauvinistic, self-styled conservative-patriotic groups. In the view of those organizations, however, it is not the finances of certain NGOs that are of concern but their activities, particularly when it comes to women’s rights.

Some at the parliamentary forum talked disparagingly about events on March 8, when a women’s rights rally was broken up by groups of aggressive men in masks. It was the rally itself that exercised them, though, not the attack on its participants.

Remarks were also made about the controversial Feminnale of Contemporary Art in Bishkek held in November, which featured one conceptual performance that consisted of two naked female performers wandering the exhibition hall. The organizers of the event had explained that the purpose of the performance was to drive home the idea that violence against women springs from the notion that they are forced to surrender control over their bodies. By reclaiming the female body, women are rejecting the premise that underlies the violence, they argued.

A representative from a conservative values association called Zheti Duban (Seven Provinces) was not buying that for a second.

“Last year’s exhibition held at the [National Museum of Fine Arts] does not correspond to the values ​​and traditions of the Kyrgyz people. It is necessary to prohibit such events,” he said.

The representative of another, similar group suggested banning all mass actions in support of the LGBT community.

Meanwhile, former lawmaker Nadira Narmatova appear to reveal the cards of the bill’s backers most plainly when she argued that some organizations should be labelled as “foreign agents.” The designation echoes the language of a 2012 Russian law that is intended to complicate the operations of groups receiving funding from international donors.

Mamataliyev, the MP who had the change of heart, meanwhile, has been more sympathetic about NGOs. Some, he has said, benefit society by working to protect the rights of women and children. He has also singled out the National Democratic Institute for praise, thanking it for funding the trips of MPs out to the regions to meet with voters.