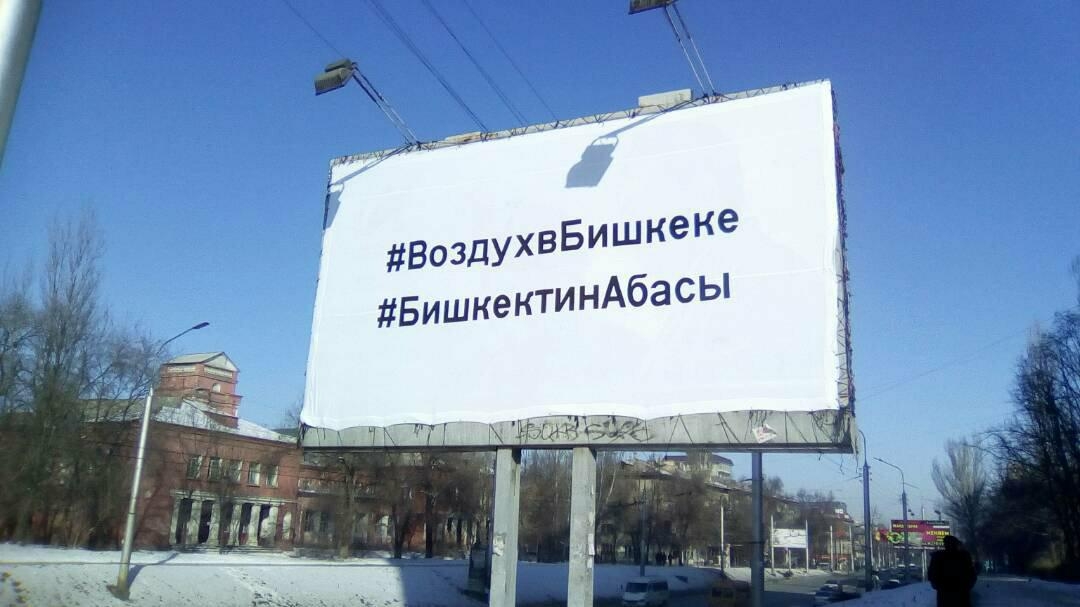 Activists with MoveGreen have erected plain billboards made of white cotton in the center and are now waiting to see how long it takes them to turn black. (Photo: MoveGreen Facebook page)

An environmental group in Kyrgyzstan’s capital is running an unusual experiment to shame authorities into seeing just how dirty the city’s air has become.

Activists with MoveGreen have erected plain billboards made of white cotton in the center and are now waiting to see how long it takes them to turn black.

“This banner symbolizes the air, and it will show how little time it takes to get dirty. We want to show everybody that the air in Bishkek is excessively polluted, “said environmentalist Baktygul Stakeyeva.

The billboards, which are emblazoned only with the word #AirInBishkek, are part of a larger project that started in November with the aim of assessing just how serious the problem has become. MoveGreen has found that the amount of fine particles in the air in Bishkek exceeds the norm by three to four times. Where the generally accepted ceiling for fine particulate matter in the air is 35 micrograms per cubic meter, environmentalists found the levels had reached 126 micrograms per cubic meters in January.

The main cause volunteered by weather experts is the number of cars in the city. Instead of the recommended 50,000 vehicles, Bishkek must contend with around 500,000 cars, many of them well past their prime.

“The main thing that distinguishes us from Kyrgyzgidromet (state meteorological agency) is that we can measure fine particles in real time. If they do this three times daily, we can collect the data by Wi-Fi every five minutes. Anybody can download an app and see data coming in from three online sensors,” Stakeyeva said.

The issue of air pollution in Bishkek is evergreen but became the subject of renewed public discussion in January, when a rash of social media users began sharing photos of the city enveloped in a particularly bad bout of smog.

Officials reacted quickly, but only to deny that they were to blame. The state electricity company said the local power plant was unlikely to be source of the problem. Instead, they said, it was probably caused by people burning coal for heating in low-rise residential neighborhoods.

Stakeyeva said that as well as being blighted by uncontrolled emissions, Bishkek also suffers from poor urban planning. The number of buildings going up across the city is disrupting the flow of air that would normally provide much-needed ventilation.

The indifference of the authorities to this problem is reflected in the fact that tackling pollution is not included in the country development strategy for the coming few years, Stakeyeva said.

“We have been talking about climate change for ages, but our authorities just don’t want to have anything to do with it,” she said.