Kyrgyzstan: Economy and healthcare shattering under weight of crisis

Any political turmoil was bound to worsen Kyrgyzstan's eviscerated economy, but what has happened over the past week has been especially destructive. 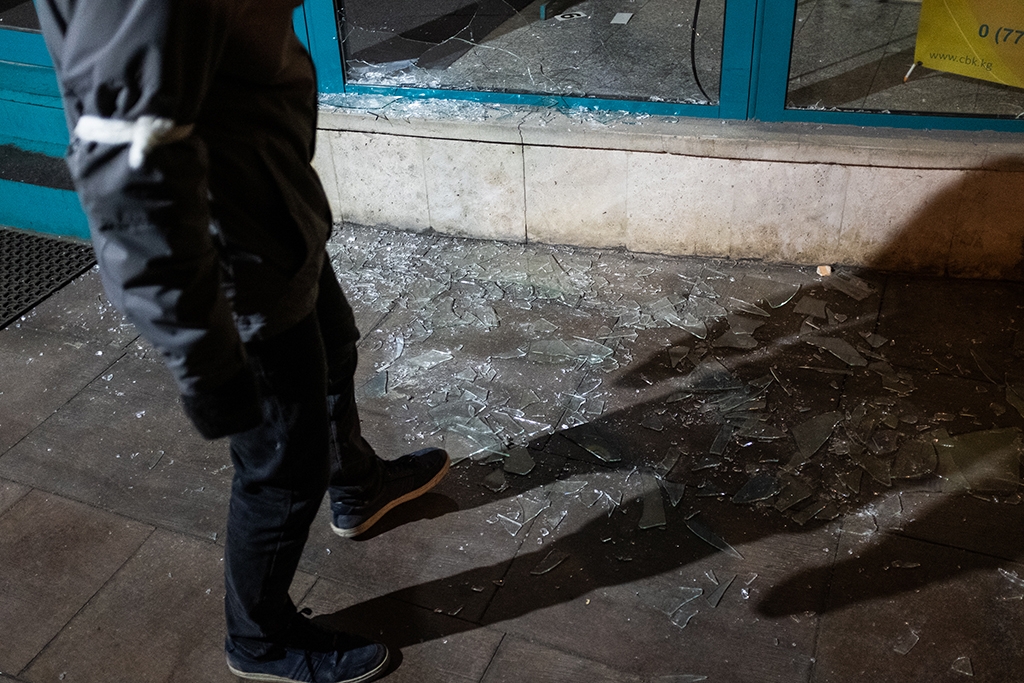 A bank window in Bishkek (photos by Danil Usmanov)

While politicians and looters in Kyrgyzstan are exploiting this moment of uncertainty to scheme and sack or seize buildings and businesses, what is left of the government is working how it can to pull the country back from economic and healthcare catastrophes.

Serious trouble is looming on both fronts.

The latest warning on the state of the economy has come from an expert at the Eurasian Development Bank, a lender created by the governments of Russia and Kazakhstan.

“Our forecast for Kyrgyzstan for this year is for gross domestic product to contract by 4.6 percent, and the current political instability may push that lower,” Yevgeny Vinokurov, chief economist at the bank’s Eurasian Stabilization and Development Fund, told Moscow-based RBK television station this week.

Even that assessment may be far too conservative.

In a COVID-19 response plan published by the United Nations Development Program and the Asian Development Bank in August, the Kyrgyz economy was seen shrinking by 10 percent in 2020.

The pain has been felt in every sector. Tourism, which accounts for almost 6 percent of GDP, has been wiped out. Remittances from labor migrants living in Russia have plummeted by around a quarter. Spending on services and nonfood items has withered.

Any political turmoil was bound to exacerbate this state of affairs, but what has happened over the past week has been especially destructive.

With order collapsing, pillagers have been especially busy targeting the mining sector, one of the few areas in Kyrgyzstan to attract significant foreign investment.

On October 6, a group of around 100 people wielding hammers and other improvised weaponry plundered a warehouse at Jerooy, the country’s second-largest goldmine, according to the operating company, Alliance Altyn, a subsidiary of Russian Platinum. The production facility in the western Talas region was reportedly set alight.

“A lot of our facilities were burned down. The administrative blocks and other assets, like the warehouse and the place where workers live,” Alliance Altyn spokeswoman Kasiyet Karacholokova told Eurasianet.

Bozymchak, an open pit copper and gold mine in the southern Jalal-Abad region, halted work on the same day after 20 local residents forced their way into the premises.

“We have been forced to evacuate people from the plant, because whatever the situation, the safety and health of our employees is a top priority,” management at Bozymchak, which is operated by Kazakh-owned Kaz Minerals, said in a Facebook statement.

Chinese miners have been hit too.

Ishtamberdy, a gold deposit near Bozymchak, was reportedly occupied by around 300 local residents. Chinese employees for the operating company, Full Gold Mining, were thrown out of the premises. Workers at a Chinese-run gold reserve in Jalal-Abad’s Chatkal district, Kichi-Chaarat, said they were forced to fend off assaults.

Zhamgyr gold mine in Chatkal came under an especially frightening incursion, according to employees. Two workers were reportedly forced to barricade themselves into the administration building. That mine became the object of a parliamentary business earlier this year, when the MP Muradyl Mademinov inquired as to the ultimate beneficiaries of the operating company, which are rumored to include the ruling family of Kazakhstan.

Kumtor, the country’s largest gold mine, is probably too deep inside the high-mountain countryside for even the most determined squatter to reach. The company said, however, that around 30 people barged into the company’s Bishkek offices on October 7 in search of valuables. They fled without finding anything to steal before police arrived.

All these incidents have not come out of the clear blue sky. Gold mines have historically been a source of deep contention among nearby communities unhappy at a perceived discrimination against hiring local residents. Mining practices have also aroused ecological anxieties.

In the Naryn region’s Jumgal district, a mob of around 100 people reportedly seized the Kara-Keche coal deposit, which is of strategic value as it provides fuel for the power plant in Bishkek. The source for that account was the state-run enterprise that runs the mine – Kyrgyzkomur. Police, however, denied that this incident had occurred. Either way, any interruption to deliveries will be calamitous as the winter heating season beckons. 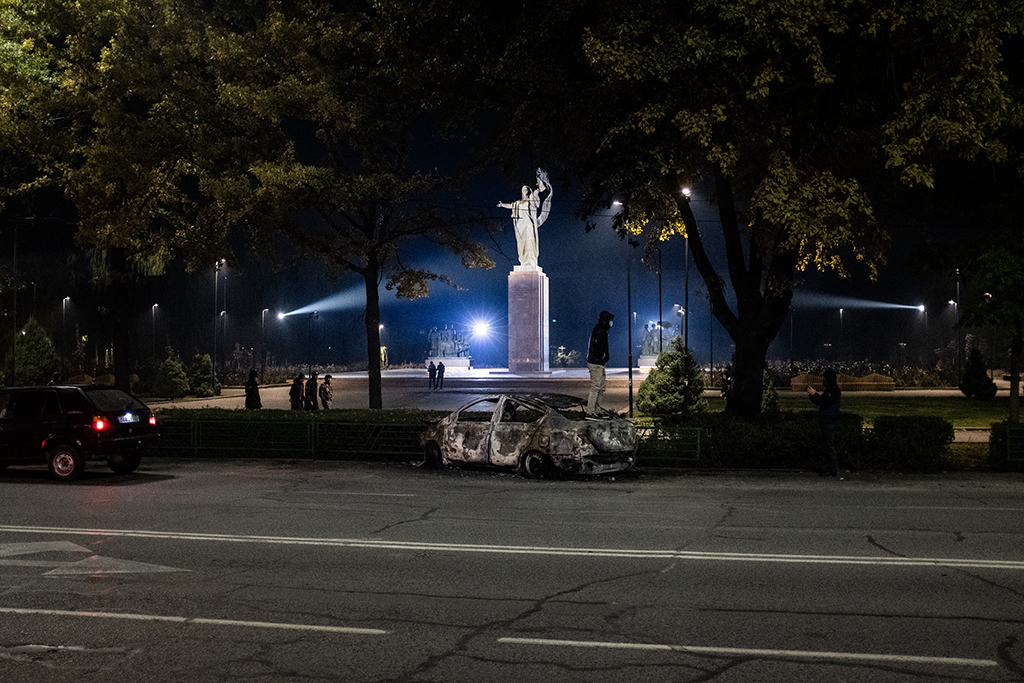 The private sector lobby group International Business Council, or IBC, on October 8 issued a desperate appeal for the banking sector to be restarted. Many banking operations, especially those involving international cash transfers, were suspended following the outbreak of unrest on October 5 in a precautionary measure to prevent a sudden surge in capital flight. But the IBC has warned that failing to restore normality will soon begin to affect people’s daily lives.

“The country runs the risk of interruptions in the supply of food and other vital goods, the termination of operations at small, medium and large enterprises that employ hundreds of thousands of Kyrgyz, and subsequent, significant losses in state revenue,” the IBC said in a statement.

The National Bank heeded that call on October 8 by calling for commercial banks to resume their retail activities and open their doors from 8 a.m. to 3 p.m. so that people might be able to collect their salaries and pensions.

Even while disarray rules in the streets around key government buildings, the Cabinet all the same proceeded to convene a meeting via teleconference software. Although ministers inevitably dwelled on the political situation, the agenda was largely devoted to practical, humdrum matters like preparing for the heating season and reassessing the budget.

The coronavirus epidemic came up too. Officials have for weeks been warning of the imminent arrival of a second wave of infections. Health Minister Sabirzhan Abdikarimov said that moment had already come.

“Yesterday and today we had a large number of new cases. The last time we had numbers like these was 53 days ago,” Abdikarimov said. “The growth rate over the past two weeks is 154 percent.”

The COVID-19 response coordination center on October 8 reported 245 new cases. Since the healthcare system is no less affected by entropy than any other branch of the state, though, it is extremely likely that figure constitutes a massive undercount.

Abdikarimov rebuked his fellow citizens for failing to stem the surge through their refusal to comply with precautionary guidelines such as wearing masks, maintaining social distancing and refraining from close physical contact.

Nowhere has that advice been so roundly flouted as the seemingly endless political rallies that paralyzed government operations in the first place. The economy is suffering now, but something more tragic may be awaiting Kyrgyzstan.

“We can expect another collapse of the healthcare system if basic prevention measures are ignored any further,” Abdikarimov said.