What started off as a genuine and timely reform has been butchered by a lack of analysis and planning, leaving hundreds of schools without principals. 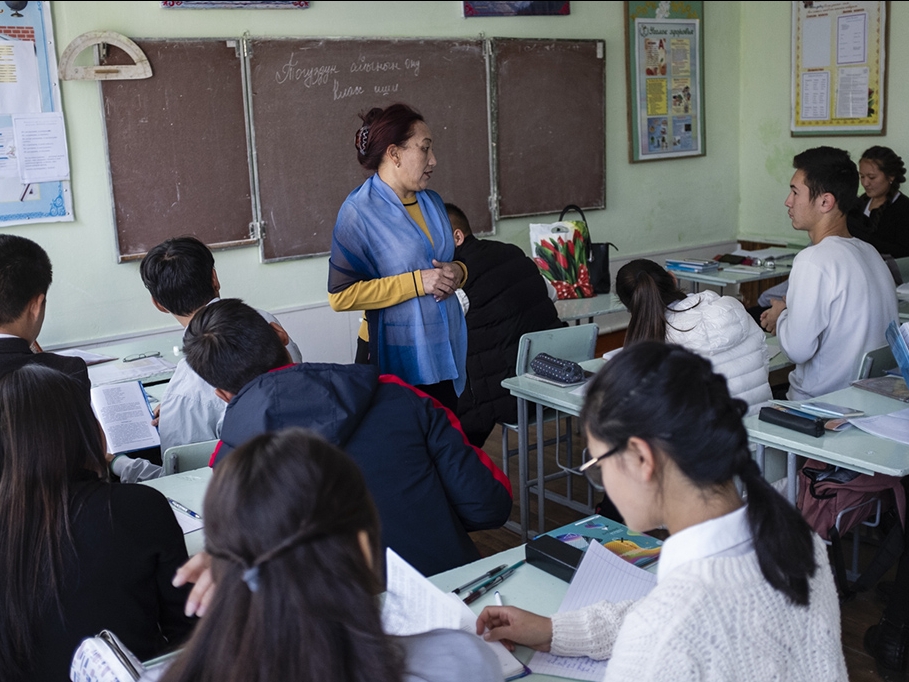 A high-tech solution to uprooting graft in the school system has backfired. (Danil Usmanov)

To get the best results, hire the best people. That was the unspoken mantra under which Kyrgyzstan’s government again tinkered, last summer, with the school system.

The immediate result of the reforms was confounding, however, with nearly one-third of schools – 656 out of 2,333 – beginning this current academic year without a principal at the helm.

The Education Ministry’s big idea hinged on a couple of novelties. One was that principals would have to compete for their position rather than inheriting it or drifting into the job by patiently climbing through the ranks. Another was the institution of a five-year limit on holding the principal’s post, a provision intended to ensure a regular turnover in the running of schools.

As the government put it, these policies were “aimed at the formation of highly professional personnel” at leadership level in all education institutions.

If the reforms were adopted as swiftly as they were, it was because they had the backing of the highest office in the land. President Sadyr Japarov argued in a July decree mandating the changes that Kyrgyzstan needed to “increase the efficiency of management in education.”

And it would be difficult to find anybody in the country who would disagree with the sentiment.

Speaking to Eurasianet, education expert Yekaterina Kasymova described pursuing the reforms as “the right thing to do.”

International indicators speak for themselves. In 2009, the last time Kyrgyzstan consented to take part in the Program for International Student Assessment, or PISA, it finished dead last among the 65 nations assessed. A year earlier, the Program for the International Assessment of Adult Competencies, another evaluation exercise conducted by the Organization for Economic Co-operation and Development, found that almost 60 percent of Kyrgyzstan’s adult population were functionally illiterate.

Ever since the dismal results in the 2009 PISA ranking, Kyrgyzstan has declined to participate – evidently to avoid the embarrassment of a repeat performance.

But it is not as if Kyrgyzstan is not trying to invest in getting out of the hole. A World Bank public expenditure spending review from 2021 found that around 22.5 percent of the state budget went toward education. That was why former President Almazbek Atambayev was able to boast in 2015 that “not one country in the world invests so much of its budgetary means into education as Kyrgyzstan.”

There are some problems with that bragging though. One is, as news website Kaktus has found after some number crunching, that spending in absolute terms is still modest.

Another is the “low capacity of management at all levels of education,” as the government puts it.

Officials pursued a nuclear option in trying to remedy that. They started off last year by dismissing all the school principals in the country who had been in the saddle for more than five years. Suddenly, there were 960 job openings to be filled through a competitive recruitment process.

Ainura Kuseinova, a representative of the Education Ministry, told Eurasianet that “the new recruitment process is open and transparent.”

“There is no human factor involved,” Kuseinova said.

Aspiring principals were first required to upload their applications to a dedicated online resource and then, once that application was accepted, to take an online exam. To qualify, applicants only had to provide evidence of having received pedagogical training and that they had at least seven years of experience in the teaching sector.

“Anyone who [fits these criteria and] believes they can do the job can apply and try for themselves,” Kuseinova said.

Those loose criteria backfired, however. In many cases, professionals from pre-school and higher education institutions, where the demands of teaching differ greatly from those in primary and secondary schools, passed the test. When it emerged that one former kindergarten teacher had managed to get a job running an entire school by successfully negotiating the hoops, the Education Ministry was compelled to sheepishly admit that “we have problems.”

“The idea was right, but the implementation was wrong,” said Kasymova, the education expert.

The way that it worked before was that regional and city education departments were authorized to appoint and dismiss principals. This arrangement has been strongly criticized over the years for being arbitrary and prone to corruption.

As is the case with so many other areas of government, the education sector in Kyrgyzstan is choked by corruption. Parents often slip bribes to teachers in return for better grades. Teachers in turn over some money to their supervisors, who then must share the booty with their civil service protectors. This daisy chain of graft cheats countless children of a decent and fair learning experience.

The revised recruitment approach was accordingly hailed as “a big step in the right direction” in minimizing kickback risks by anti-corruption experts like Erkayim Mambetaliyeva.

“We have to grant the Education Ministry due respect because it finally took this step,” Mambetaliyeva told Eurasianet.

Cutting term limits to five years, meanwhile, is supposed to keep things fresh. It is not uncommon for principals to hold their jobs for decades in Kyrgyzstan.

“When a person stays in one place in power for 30 years, be it in politics or education, nothing good will come out of it,” Kasymova said.

These good intentions were thwarted by rushed execution.

Despite receiving more than 2,000 applications for principal jobs in August, the Education Ministry only managed to fill under one-third of those posts by the time children were returning to the classroom in early September. A second round in October saw almost 1,600 applications submitted, but only 312 candidates approved, leaving a shortfall of 309 vacancies.

A third round took place in November and December. The latest news on the official website of the Education Ministry from December 15 states that the recruitment process is ongoing. Some schools may finish the academic year without principals.

The slow progress has its roots to a large extent in the lack of tech savviness among many of the applicants.

“The majority of applicants are elders who have poor IT skills, which are necessary to pass the test,” Kuseinova said.

Almost half of the teachers in Kyrgyzstan are of pre-retirement or even post-retirement age.

Another explanation lies in the test itself. The quiz is sprawling and consists of 80 questions and requires knowledge of legislation, management methods, pedagogy, psychology and, of course, IT. Some have argued the knowledge requirements implied by the test are excessive and that few applicants are equipped to overcome the hurdles.

Kasymova attacks the same problem from another angle, observing that the sometimes-trifling nature of the test questions “absolutely does not reflect the competencies required of school principals.”

An interview stage should be incorporated so candidates can “present their experience, vision, and plans for improving education at the school they are applying for,” she said.

The reform agenda may run into legal issues. According to lawyer Timur Imankulov, it was technically illegal to hurriedly fire principals, since they are not formally civil servants and their employment is regulated by a Labor Code that includes robust protections against arbitrary dismissal.

“It is impossible to dismiss them by [presidential] decree or [ministerial] order,” explained Imankulov.

None of the fired principals has yet intimated they are planning to sue, though, so the authorities may yet dodge that bullet.

What started off as a genuine and timely reform has been thus far butchered by its implementers, reflecting the lack of thorough analysis and planning.

“It resembles an experiment rather than a well-thought reform program,” summed up Kasymova.