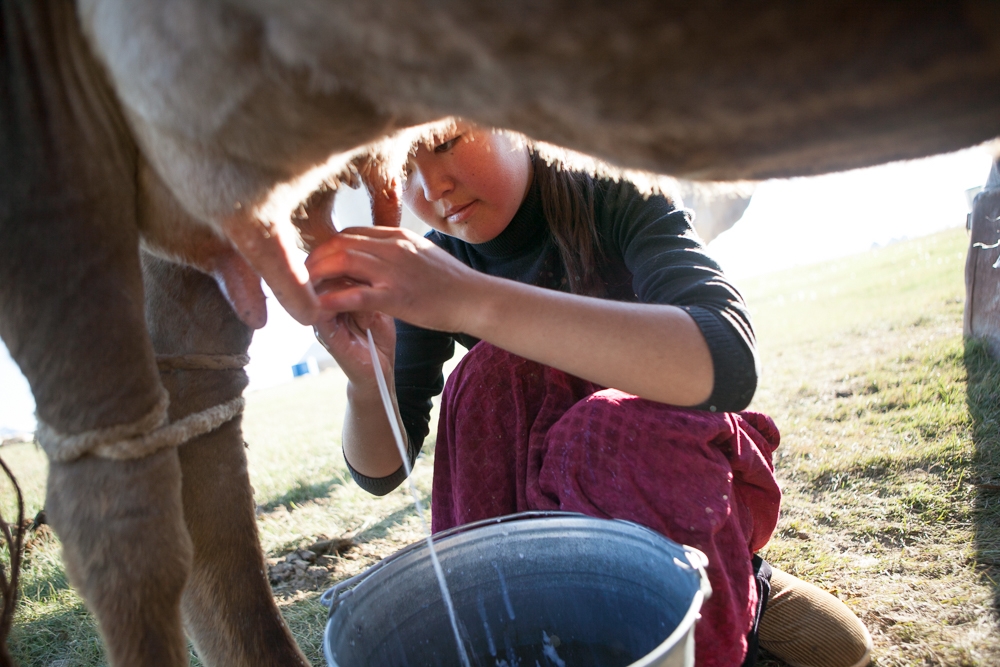 A young woman does the milking in Song Kul. (Photo: David Trilling)

Legislation designed to discourage the controversial practice of bride kidnapping fizzled recently in Kyrgyzstan’s parliament. The bill lost support because a key provision could also be used to crack down on the ostensibly illegal, yet quietly tolerated practice of polygamy, according to a member of parliament. The bill would have authorized fines for Islamic clerics who bless marriages that are not already registered with the state.

Mullahs play an important social role in villages by providing a religious veneer to customs that the state deems taboo, especially bride kidnapping, a traditional practice that survived the Soviet era and has continued in independent Kyrgyzstan. Because bride kidnapping is illegal, most resulting marriages are not initially registered with the state. But mullahs, via the Islamic “nikaah” marriage ceremony, often help affirm a forced union in the eyes of local communities.

Having multiple wives is also forbidden by Kyrgyzstan’s civil code and carries a penalty of two years in prison. But polygamy is believed to be common among men who can afford to have more than one wife. A mullah can also endorse a polygamous union with a nikaah ceremony. The failure of the bride-kidnapping bill to make headway in the legislature when it came up for debate on January 26 has poisoned relationships between male legislators and their female counterparts. At least one female MP asserts some of the 94 men in the 120-strong legislature are intent on protecting polygamy.

Asiya Sasykbayeva, a parliamentary deputy from the Ata-Meken party, insists that political will to curtail bride kidnapping “exists” in Bishkek. To buttress her point, Sasykbayeva cited legislation passed in 2011 that raised the legal age for marriage from 16 to 17. That bill’s backers cited the need to protect school-age girls from early marriage, particularly in rural areas where bride kidnapping is most common.

“I was surprised when I found out that many [male] MPs whom I thought more progressive voted against the [January 26 nikaah bill]. But it is well known that unofficial polygamy exists in Kyrgyzstan. I think many deputies voted to defend their private interests,” Sasykbayeva told EurasiaNet.org.

Debates over polygamy are not new in Kyrgyzstan. A leaked US State Department cable from April 2007 recalls that a legislative attempt to legalize the practice only narrowly failed in the mid-1990s. At the time the cable was written, polygamy had reemerged as a “topic of discussion in society because many prominent government officials [...] possibly including President [Kurmanbek] Bakiyev and former Prime Minister [Felix] Kulov are rumored to have more than one wife,” claimed the diplomatic cable. Kulov, who now heads the Ar-Namys party in parliament, voted against the January 26 nikaah bill; Bakiyev was ousted amid bloody street riots in 2010.

For non-governmental organizations campaigning against bride kidnapping, the nikaah bill’s failure was a blow. Current legislation punishes the “abduction of a person with the aim of entering marriage” with up to three years in prison. But the law has done little to stop bride kidnapping. An October 2011 study by the Kyz-Korgon Institute, a non-governmental organization (NGO) that seeks to raise awareness about bride kidnapping, showed that 45 percent of women married in the provincial town of Karakol in 2010 and 2011, had been non-consensually kidnapped. The nikaah legislation would have fined the clerics who bless such marriages.

Munara Beknazarova of Open Line, a Bishkek-based NGO that offers support to bride-kidnapping victims, said many village mullahs are aware that abducting a bride is “against Islamic principles,” but still bless marriages if the bride says she has consented to the union.

“By the time the mullah arrives, [the bride] has often been physically intimidated, occasionally raped, and threatened with social exclusion,” said Beknazarova. “Of course she consents.”

Beknazarova maintained that an unregistered union denies a woman, and, ultimately, her children, of her civil rights because she has no legal right to alimony or protection if she leaves an unofficial marriage. This helps cement the practice of bride kidnapping as normal in rural Kyrgyzstan. The bulk of MPs are village-born and remain sensitive to rural concerns, Beknazarova said. But they have other priorities, she added “Last summer [deputies] passed a law increasing criminal responsibility for stealing livestock,” she said. “Naturally, women’s organizations took offence. We understand the importance of livestock to farmers, but why isn’t there the same urgency when it [concerns] stealing daughters?”

A breakdown of the voting on the nikaah bill vote underscores Beknazarova’s concern that parliament as a whole does not take bride kidnapping seriously: Only 73 of 120 MPs cast votes on the bill. Of the 43 that voted to adopt the bill, 17 (out of 26 women holding seats in parliament) were women; three women were among the 30 that voted against. Of 47 MPs who did not attend the session, 41 were male.

For Dastan Bekeshev, the only man who was among the nine sponsors of the nikaah bill, the voting pattern indicates that “extremely conservative outlooks” among deputies block gender-sensitive legislation. “Many [MPs] say it is too soon to pass these kinds of laws. But we have had 20 years to deal with these problems, so I don’t agree,” Bekeshev told EurasiaNet.org.

The folk performer who embodied the spiritual code of Kyrgyz art dies, 53