Authorities seemed unperturbed by vote violations when they were first told about them. 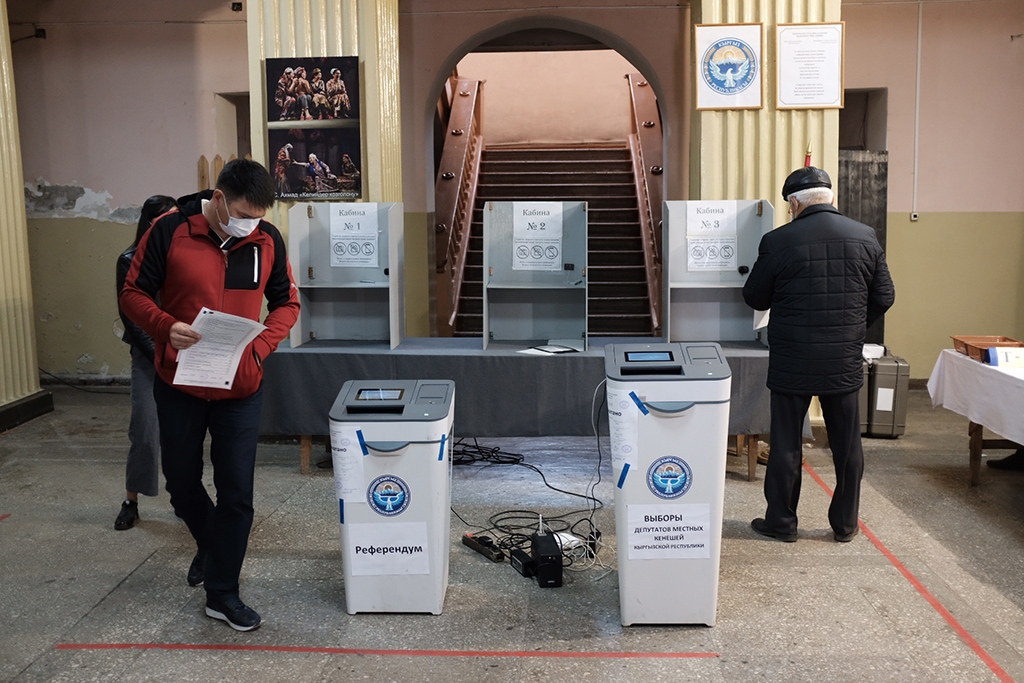 Election officials in Kyrgyzstan have over the past two weeks canceled results of last month’s local government elections in three major cities, including the capital, over alleged irregularities.

The decision means votes will have to be held once more to pick city councils in Bishkek, Osh and Tokmok. Even while those elections cannot be deemed valid, the results of a low-turnout referendum held on the same date, April 11, which gave the president sweeping new powers, will stand.

Election commissions in the three cities have said that they discovered violations at all stages of voting, from the preparation through to the counting of ballots.

The chair of the Bishkek territorial election commission, Kairat Mamatov, said results of 23 precincts and 45 percent of the votes cast have been invalidated.

“Participants of the electoral process may appeal within three days. After that, the [Central Elections Commission, or CEC] will consider our decision,” Mamatov said.

The vote official said that parties responsible for committing transgressions will be barred from participation in fresh elections. Emgek and Ak-Bata, which both won places on the 45-seat council in Bishkek, have already been disqualified.

The decision to cancel results in Osh came on May 11. There, officials cited violations of the right to a secret vote, the use of administrative resources and other rules as the basis for their judgement.

In Tokmok, the cancellation of the election outcome happened on May 1. Election officials said they found evidence that voters had been registered as living at the home addresses of candidates and their relatives. This suggested people had been paid for their ballot, vote officials said.

Elections expert Atyr Abdrakhmatova told Eurasianet that she has been warning the CEC since March of the fraudulent registration of voters, but that her complaints were ignored.

The change of mind, she suggested, has been occasioned by “political motives.”

“This is a scam. When observers working within the law [reported] violations, nothing was done. And then in these same polling stations, using the same video footage and photos, they find violations. This smells of corruption and manipulation,” she said.

The CEC has appealed to President Sadyr Japarov to request that they be permitted to hold a new round of votes in Osh, Kyrgyzstan’s second-largest city, and Tokmok, but this idea is being discouraged by those worried about the ongoing COVID-19 crisis.

In addition to allocating valuable perches of local power to winning candidates, local elections in Kyrgyzstan are useful in helping sense the direction national politics are blowing. Those politics have been in a state of utter disarray since October, when the since-cancelled parliamentary elections helped spark a largely aggression-fueled street movement that ushered Japarov’s ascent to power.

No follow-up parliamentary election has yet been held, although one is expected for later this year.

The incoming legislature will look wholly different from the outgoing body for two important reasons.

The parties represented will almost all be different. The largest bloc in parliament was won at the last election, in 2015, by the Social-Democratic Party, or SDPK, of the now-jailed former President Almazbek Atambayev. They are now a spent force and their position in public life will most likely be taken over by newly formed parties loyal to Japarov.

Parliament itself will be a different body. Under the changes approved through the April referendum, the number of deputies will be slashed from 120 to 90 and the body as a whole has had its already-weak decision-making powers trimmed.