Atambayev was accompanied to the plane by 200 supporters. 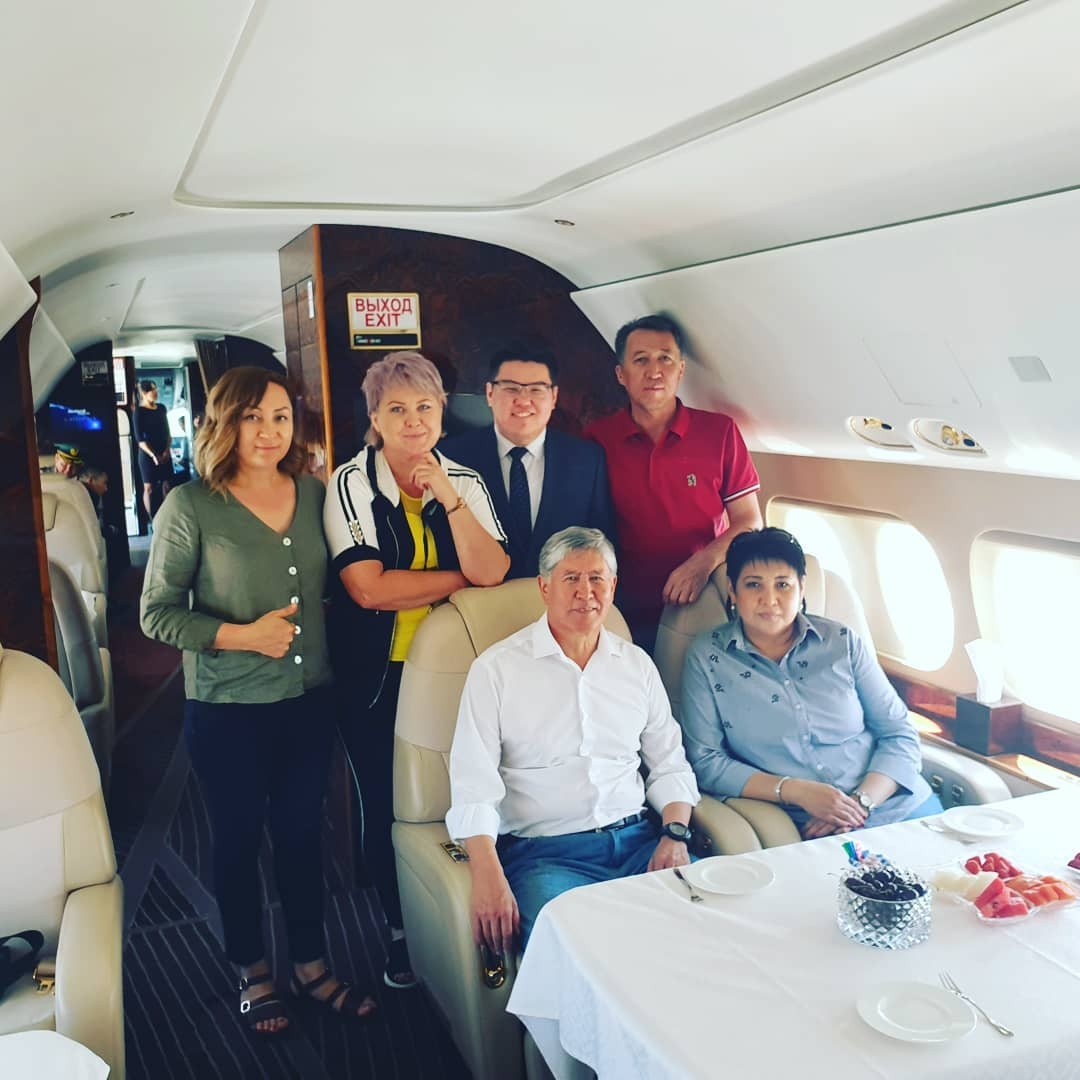 Atambayev, bottom left, posing for a photo with his closest advisors onboard a Sukhoi Superjet 100. (Photo: Kunduz Djoldubayeva Facebook account)

Kyrgyzstan’s former president Almazbek Atambayev left the country on a plane to Russia on July 24 and has, by doing so, put a mounting political crisis on hold for now.

The Sukhoi Superjet 100 operated by Rusjet departed at midday from Kant, a Russian military airbase 25 kilometers east of the capital, Bishkek.

Police had in these past weeks repeatedly summoned Atambayev for questioning in connection with the case of a crime boss who was released from prison in 2013 before serving his full sentence. Lawmakers who voted in June to strip the former president of immunity contended that the release was effected at his request.

Atambayev’s departure from the country will lower the temperature of a simmering confrontation between him and his protege-turned-foe, President Sooronbai Jeenbekov. The destination strongly hints that Russia, which is Kyrgyzstan’s most important economic and security partner, intervened to ease tensions.

Atambayev’s advisor, Kunduz Djoldubayeva, said that the ex-president is holding meetings “at the highest level” while in Russia. Kyrgyz-language media have reported that the flight to Moscow followed an invitation from Eurasian Development Bank chairman Andrei Belyaninov.

Atambayev has not disclosed who he intends to meet in Russia, but he insisted that his absence from Kyrgyzstan would be brief and that he planned to return by the evening of July 25.

A phalanx of around 200 supporters accompanied Atambayev to Kant airport, apparently as a precautionary measure against possible arrest, which is still an oft-mooted possibility.

While discussing lifting his immunity, parliamentarians aired a whole range of potential criminal charges that they argued could be issued against him. The Prosecutor General's Office is currently working on five separate cases that could end up landing the former president in the dock.

Some in the convoy to Kant broadcast their progress on Facebook, while others waved flags of Kyrgyzstan. Cars weaved across the road frequently, violating basic rules of the road by driving in the direction of oncoming traffic.

Their starting point was a residential complex in the village of Koi-Tash, where hundreds of people have been camping around the clock for several weeks in anticipation of a possible police raid.

There is grumbling that Atambayev was allowed to leave the country at all, in defiance of repeated police summons, and from a military base controlled by a foreign government at that.

Atambayev was only allowed to serve one term, so when elections were looming in late 2017, he scanned the field for a handpicked successor who he thought would prove pliable and enable him to continue playing a hand in running the show. Jeenbekov, a dour and uninspiring presence, seemed to fit the bill. For safe measure, Atambayev left behind another loyalist, Sapar Isakov, in the prime minister’s chair. The plan seemed to be that Isakov, a smooth and wealthy technocrat type, could himself one day become president.

But things went wrong very quickly. Jeenbekov turned out to be his own man. In short order, he fired and then jailed Isakov on corruption charges. Several other Atambayev cronies met the same fate.

Atambayev has managed to avoid arrest, but the net is tightening. While he was once defiant, the former president is evincing signs of understanding that he may be unable to be endlessly defiant. One of his spokespeople, Sergei Slesarev, said on July 23 that Atambayev would agree to submit to questioning from the police but only through the media.