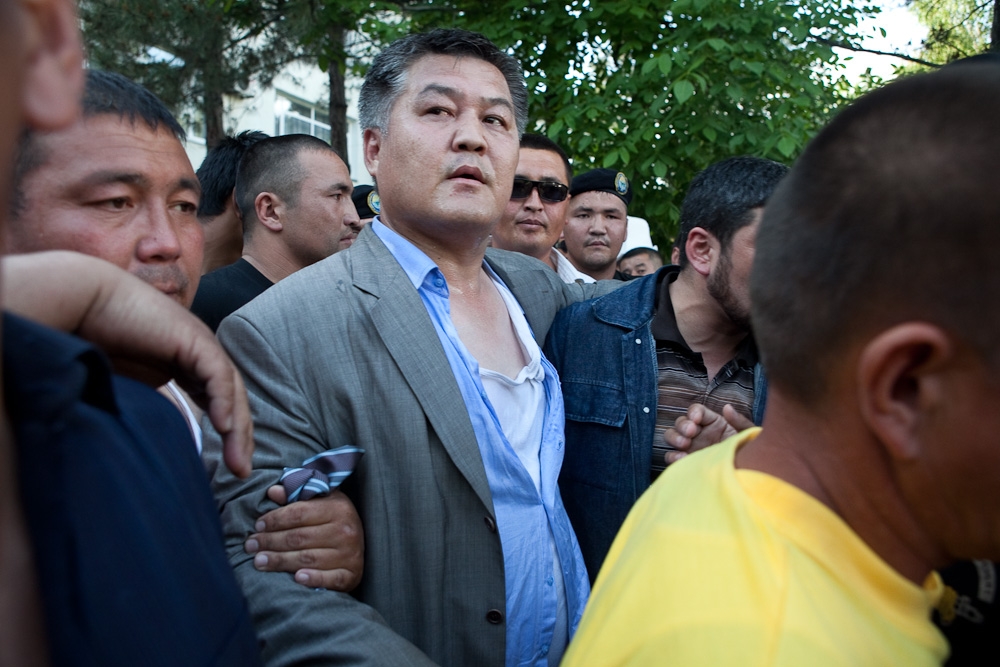 At 3 pm on May 13, just a couple of hours before he would be ousted from office, Bektur Asanov, the provisional governor of Kyrgyzstan’s southern Jalal-abad province, appeared calm and unaware of looming danger. He even insisted that the provisional government faced no threat of a counter-strike by supporters of Kurmanbek Bakiyev, whose administration collapsed in early April. But there he was, at 7 pm, being unceremoniously escorted from his office by people shouting "Bakiyev, Bakiyev" and carrying banners reading, “Bakiyev is our president.”

Jalal-abad was not the only southern province caught up in the rip tide of counter-revolution. Bakiyev supporters also ousted the provisional governors of Osh and Batken provinces. The sudden developments effectively split Kyrgyzstan in two, with loyalists of the ousted president in control of the South and the provisional government remaining in charge of the North.

Provisional government representatives have vowed to restore their authority in southern regions. But it was not immediately clear what the leadership in Bishkek could do to make good on their intentions.

In Jalal-abad, Asanov’s demise came about with startling speed. A crowd gathered in the center of the town at around 6:30 pm. Young men in tracksuits soon stormed the executive compound and took the governor into custody.

According to one witness, protesters kicked and punched the provisional governor, although later, when he was led away, he did not appear seriously injured. Asanov – his tie gone, buttons ripped from his shirt, leaving his sweaty undershirt exposed -- had to pass through a gauntlet of Bakiyev partisans, who heaped verbal abuse on him.

After a brief standoff with a black-clad Interior Ministry SWAT team, interim government security services, including police, stepped aside and let Bakiyev partisans lead Asanov away.

Who is now in charge in Jalal-abad remains unclear. The bulk of the protesters were clearly Bakiyev supporters, and some want to see the former president return from his present exile in Belarus. [For background see EurasiaNet’s archive].

“Bakiyev is our president. This is a democracy and this is what the people want,” said an old woman amid the cheers of a surrounding crowd as she stood outside the executive offices in central Jalal-abad.

But one man who identified himself as one of the organizers of the Jalal-abad protest suggested that Bakiyev’s return wasn’t a realistic possibility, especially given Russia’s evident distaste for the former Kyrgyz president. [For background see EurasiaNet’s archive].
He hinted that the counter-revolutionary movement would prefer to bring in new leaders that were nationalist in orientation and who would not give in to Russia’s geopolitical demands.

In Osh, a crowd of about 1,500 forced provisional governor there, Sooronbai Jeenbekov, from power. Later, the former Osh governor, Mamasadyk Bakirov, who had been removed from office in April following the Bakiyev administration’s downfall, reoccupied his old office, Radio Free Europe/ Radio Liberty (RFERL) reported.

Bakirov later addressed a crowd outside the Osh executive building, calling for Bakiyev’s return. Jeenbekov, meanwhile, appealed for calm, according to an RFERL report from Osh.

Asanov, the displaced provisional governor in Jalal-abad, apparently considers the turn of events on May 13 to be temporary.

An aide to Asanov explained that the provisional governor had retired overnight to his home village, Suzak. But, the spokesman emphasized, Asanov intended to return to Jalal-abad in the morning of May 14 to engage in talks with his enemies.

In a separate interview with the AKIpress news agency, Asanov vowed that all the people who drove him out of his office would be arrested. He also expressed the intention to form an armed volunteer force that would help reassert the provisional government’s authority in the province.

Overnight, approximately 100 pro-Bakiyev protestors remained in Jalal-abad’s central square, guarding the executive office building. Some of them said they were determined to hold what they had taken back from the provisional government.