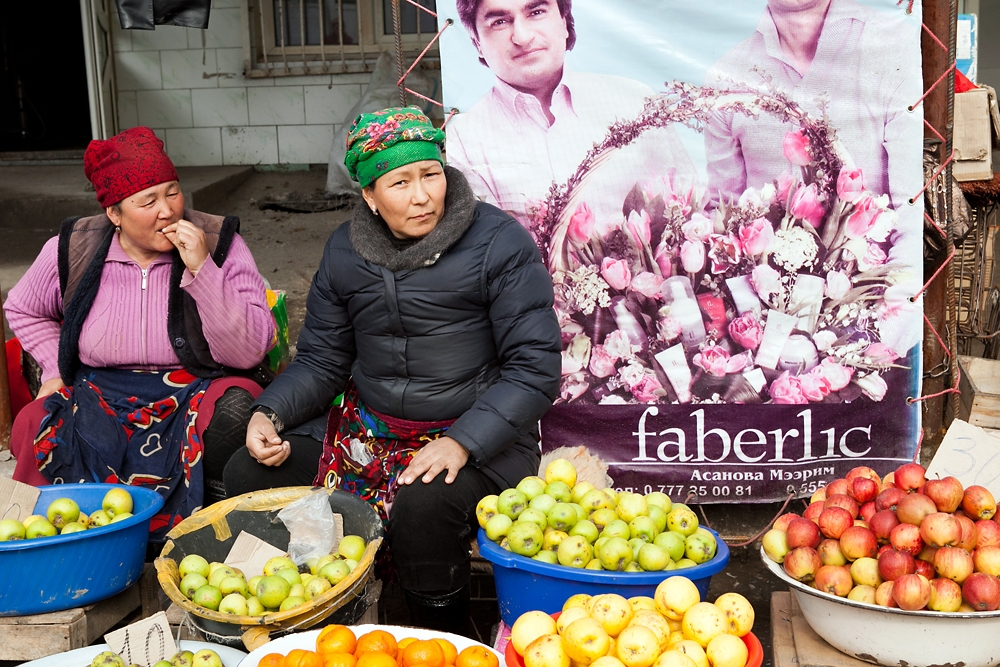 Sitting in his office, surrounded by marketing materials, Dastan Omuraliev voices lots of confidence in his new startup: “Kyrgyzstan has some of the best fruits and vegetables in the world,” he says. Once processed and packaged into colorful three-liter boxes of organic apple juice, “they can compete anywhere.”

Few visitors to Kyrgyzstan would dispute Omuraliev’s claim about the country’s produce. For much of the year, bazaars teem with juicy peaches, tomatoes, apples and all sorts of melons. But with a weak economy and foreign investors frightened by chronic political instability, turning Kyrgyzstan’s natural abundance into exportable goods is difficult. Overwhelmingly, Kyrgyzstan remains a nation of poor farmers and traders hawking products produced elsewhere.

The debate over domestic productivity, or lack thereof, has taken on a new dynamic as Bishkek negotiates to enter the Russia-led Customs Union, a protectionist trade block that also includes Belarus and Kazakhstan. Opponents of accession in Bishkek point out that all three countries have stronger, more industrialized economies. By contrast, in Kyrgyzstan, revenues from re-exported consumer goods, mostly produced in China, generate upwards of 15 percent of GDP, according to Bishkek-based economist Roman Mogilevski. The World Bank lists Kyrgyzstan as Central Asian country with the highest dependence on trade relative to GDP.

The quandary for Bishkek is that Customs Union membership is expected to curtail the country’s re-export trade.

Kyrgyz officials, fearful that their country won’t find a niche within the club, are asking for concessions with generous grace periods on over 1,000 products, many of which are Chinese inputs essential for its own light industries, such as textiles. Last month the chairman of the Russian State Duma’s Committee for CIS Integration, Leonid Slutsky, told Kyrgyz MPs they were being greedy.

Soon thereafter, Economics Minister Temir Sariev said Kyrgyzstan needs over $1 billion in aid from members to smooth over potential bumps in the accession process, Vechernii Bishkek reported on November 25. The requested aid -- $200 million a year over a five-to-seven-year period -- would help the government create “growth spots” and “new value added” in the economy, as well as compensate local businesses affected negatively by accession, he said. Sariev added that another $215 million was necessary to bring Kyrgyzstan’s border infrastructure into line with Customs Union standards.

Omuraliev, the entrepreneur whose EcoProduct Asia makes juice extracted from domestic fruits, is already primed for entry. Since August his company has processed 16 tons of local apples per day using Austrian equipment at their factory in Shopokov, half an hour from Bishkek and three hours from his main export market, Almaty, in Kazakhstan. Omuraliev refused to give turnover figures but said about 20 percent of his sales are in Kazakhstan, on the other side of the Custom Union’s barbed-wire fence. He claims to have had interest from Russia, too.

“In May next year, when we begin production again, the challenge will be to produce enough juice to meet demand,” he says, adding that expects sales to “double if not triple” in 2014.

Bishkek has recognized that the production of food, beverages and tobacco help diversify the economy using source materials that are already in abundance, but which currently often go to waste. The sector has grown 300 percent in the last 10 years and accounted for 14 percent of total industrial production in 2012, according to the National Statistics Committee. New food processors such as EcoProduct Asia have benefited from generous tax breaks.

In an interview with the Russian television station Mir on August 30, President Almazbek Atambayev restated his commitment to entering the Customs Union. Noting that re-exporting Chinese products to Kazakhstan and Russia had helped the country “survive through difficult times,” he said it was now “time to think of the future” by developing homemade industries and services ahead of Customs Union entry.

Bakai Zhunushov, the business advisory services coordinator at the European Bank for Reconstruction and Development (EBRD), is more cautious about Customs Union entry, anticipating a “difficult adjustment period.” Still, he agrees that innovative startups such as EcoProduct Asia – by linking farmers to larger, richer markets outside the country – would be able to take a step in the right direction. “When it comes to growing fruits and other primary products, a large part of this value is often lost. … A big part of the harvest is spoiled before it is sold,” Zhunushov told EurasiaNet.org.

Omuraliev is part of a new generation of entrepreneurs that “start from nil,” says Uluk Kydyrbaev, a former head of the Bishkek Business Club, a prominent lobby. He contrasts today’s businessmen with those who got rich during the initial post-Soviet privatization rush. “Today’s [entrepreneurs] have a wider compass. They think in terms of globalization and the mass possibilities it offers,” he told EurasiaNet.org.

But Kydyrbaev argues that the majority of new and would-be Kyrgyz producers will be better off outside the Customs Union than inside it, despite government messaging to the contrary.

“Currently if a small company is trying to build a factory they can choose between expensive, excellent quality materials and equipment from Europe, or cheap affordable equipment and materials from China.” That “cheap Chinese component” is often a default preference for new businesses in Kyrgyzstan, who tend to lack significant start-up capital, said Kydyrbaev. The Customs Union, with its high import tariffs, will increase the cost for both options and “restrict choice,” for entrepreneurs, he said. That’s “bad for innovation.”