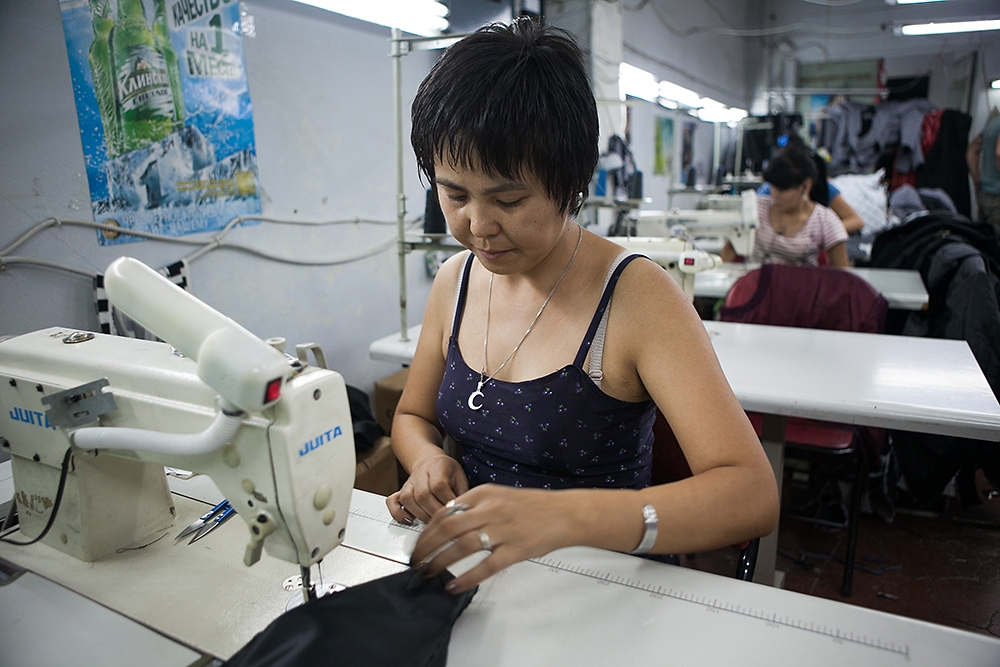 As Kyrgyzstan prepares for EEU entry, are business ready for the change? (Photo: David Trilling)

“We don’t have full information about it [the EEU]. We know maybe only 5 percent what it means for us,” said Uluk Kydyrbaev, head of the National Alliance of Business Associations, a lobby in Bishkek. “Some of our members see benefits, some see threats.”

Several analysts in Bishkek say they were stunned by how quickly their country moved to join the protectionist trade bloc. After toying with membership since 2010, Kyrgyzstan accelerated the accession process in 2014, as Russia whipped out new carrots and sticks. Amid its increasing isolation by the West due to the crisis in Ukraine, the Kremlin offered Bishkek up to $1.2 billion in aid to join, while introducing strict new rules for migrant workers from countries outside the EEU. Up to one-fifth of Kyrgyzstan’s population work in Russia.

Russia’s purchasing power has been pushed downward by a stricken ruble, dealing a blow to the prospects of Kyrgyzstan’s already hurting and limited manufacturing sector. The head of a group representing apparel producers said February 20 that half of Kyrgyzstan’s clothing companies are idle and the rest are not operating at capacity, KyrTAG.kg reported.

Meanwhile, many local entrepreneurs are busy tracking rumors—alarmed, for example, by reports that Belarusian and Kazakh companies have faced protectionist hurdles accessing the much larger Russian market. Several businesspeople mentioned plans to open assembly plants to make consumer goods for the EEU market from imported Chinese parts. They believe components from China (like buttons) will be taxed at a lower rate than finished goods (like jackets). But this may prove to be wishful thinking.

An inspector at the State Customs Agency told EurasiaNet.org that import tariffs have not yet been agreed upon, as there are several more protocols Bishkek must sign before joining the EEU.

Some experts expect that Kyrgyzstan’s thriving black market and porous borders will render EEU membership somewhat symbolic—just like the date Kyrgyz President Almazbek Atambayev says he “hopes” to accede, May 9, the anniversary of the Red Army’s victory over Nazi Germany. Critics smirk at the date, describing the EEU as Russian leader Vladimir Putin’s attempt to rebuild the Soviet Union.

Whatever changes the EEU brings to Kyrgyzstan, they are unlikely to improve the country’s tarnished reputation among more fastidious entrepreneurs, long scared off by energy shortages, widespread corruption, and a raft of international arbitration suits brought against the government by jilted investors.

Kydyrbaev, the business lobby representative, expects the EEU to produce an uptick in foreign investment, but not from the West. “We’re not expecting companies that have held IPOs and have good reputations and care about ethics. We expect companies who have that culture [of paying bribes] and are ready to participate in ‘unofficial’ relations,” Kydyrbaev said. “We’re not proud of this, of course.”

A mid-level manager at a large Chinese state-run company confirmed that little would deter Chinese investors from experimenting in Kyrgyzstan, even as he painted a grim picture for would-be entreprenuers.

“Those who don’t have experience investing here will lose their money. It is difficult … to start a business without experience of how the law and traditions here work. You even have to steal money to know how it works,” he said, speaking on condition of anonymity for fear of repercussions from his company and the Kyrgyz authorities. He estimated 90 percent of Chinese entrepreneurs in Kyrgyzstan fail, but does not see that as a deterrent. “There is a lot of competition in China. And people have lots of capital. So Chinese will keep coming and trying.”

Another Chinese businessman, a 30-year-old electronics trader who has been in Bishkek for seven years and asked to be called by his local name, Borya, said he expects to leave when Kyrgyzstan joins the EEU. Kyrgyzstan’s membership in the organization will make it harder for him to import the Chinese batteries and solar panels he sells.

Since the start of the troubles in Ukraine and Russia’s own economic decline, currencies throughout Central Asia have trailed the ruble downward. The falling som has hurt Borya’s profit margin already. “I thought about starting a little factory, but starting a business here is painful,” he said. In particular, he complained about incessant visits from government inspectors trying to shake him down.

“The law doesn’t work here. If it worked, people would not be afraid to do business here,” he said.

Meanwhile, Western investment appears to be crashing. On February 14, citing Foreign Ministry data, 24.kg reported that American investment in Kyrgyzstan plummeted by over 50 percent during the first nine months of 2014, compared with the previous year, a decrease no doubt heavily influenced by the American withdrawal from the Manas airbase. The data also said the trade imbalance was 99 percent in the United States’ favor. A Foreign Ministry spokesperson told EurasiaNet.org that the data was leaked, and would neither confirm nor deny its authenticity.

“Personally, I think joining [the EEU] is economic suicide. We don’t produce anything. We were enjoying a liberal customs regime for 20 years, but never started producing. That helped a lot of people get through bad times. But there’s been no real preparation for joining the union,” said Kydyrbaev. His consolation: “The government understands it cannot force 100 percent of the [EEU] rules on the population.”