Many of the affected families were caught up in the ethnic unrest that tore through Osh in June 2010. This story has roots in those troubles. 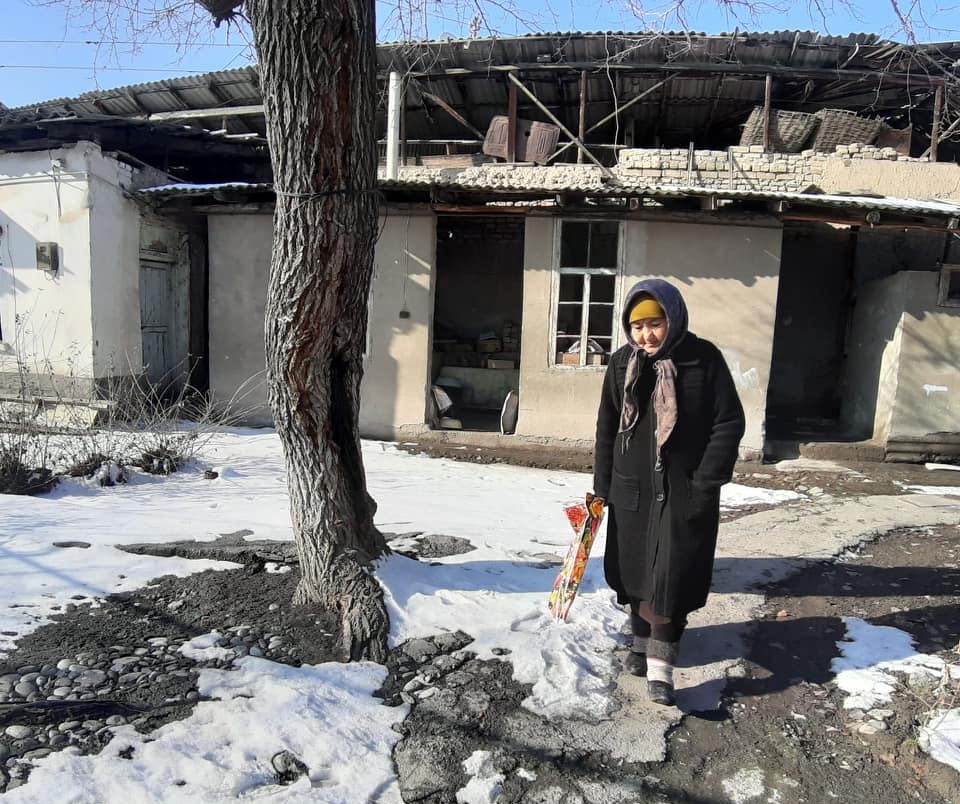 One of the residents facing eviction (photo: Interbilim)

The court summons delivered to Ulpat Abdullayeva and dozens of her neighbors in Osh in November 2019 was a bolt out of the blue.

What they learned at the hearing shocked them only further. A bazaar trader named Nurkul Shyrdakov told the court that their land actually belonged to him. Among the claimed territory was the 900-square-meter patch that Abdullayeva, 67, says she owns together with her two sons.

“My ancestors have lived here since time immemorial. My family has all the documents for the house and land. I don’t want to end up on the street in my old age because of some illegal takeover,” said Abdullayeva.

Fully 33 households in this southern Kyrgyzstan city are embroiled in the property dispute, which drags on to this day. Many of the affected families were caught up in the ethnic unrest that tore through Osh in June 2010. This story has roots in those troubles.

The Teshik-Tash neighborhood, where all the properties claimed by Shyrdakov are situated, lies along Osh’s Lenin street, right by the central bazaar. Most of the residents are ethnic Uzbeks who have been in the area for generations.

“I inherited this land from my parents, and they in turn got it from my grandfather, Atabai Alibayev, who was born in 1888 and fought in the Great Fatherland War,” said Abdullayeva, using the Soviet nomenclature for World War II. “After returning from the front, he built a small house here.”

The home of Ziyoda Shamshidinova, a mother of three, is a short walk away. She has been living at her husband’s family home for three decades. For her, what is happening is clear: fraud. Shyrdakov forged his documents and is trying to unlawfully wrest their property from them, she insists.

“My family inherited our house from my father-in-law. We have all the supporting documents, going back to 1962,” Shamshidinova said.

Much of the case appears to hinge on whose documents are deemed more credible. Although Shamshidinova says her family’s claim is more deeply rooted in history, their paperwork is newer than that produced by Shyrdakov. All because of what happened in 2010.

“The court is for some reason ignoring our documents, saying that some of them were reissued after the June 2010 events, when our house burned down,” Shamshidinova said.

Advocates for the beleaguered residents are cynical about the ability of Kyrgyz courts, which are widely reputed to be riddled with corruption, to produce an impartial judgement. The ethnic flavor of the situation adds an especially troublesome dimension, as Uzbeks have typically drawn the short straw when grappling with southern Kyrgyzstan’s justice system.

The head of the Osh office of advocacy group Interbilim, Gulgaki Mamasaliyeva, who has taken a dedicated interest in the case, told Eurasianet that back in 1999, Shyrdakov managed to finagle a resolution from the Osh city hall granting him permission to build a department store on an area of 24,000 square meters spanning across the 33 homes now at the center of the dispute.

What mystifies residents and their supporters is why the trader only came forward two years ago.

“Why is he declaring this after 20 years? As if he had forgotten that he had a right to these plots but all the same continued to work as a bazaar trader, mutely looking on as people lived and built up on what he claims is his land,” Mamasaliyeva said.

Shyrdakov, 65, however, mounts a spirited defense for this claim. He told Eurasianet that in March 1998, he bought the shell of an uncompleted department store building from the State Property Fund for 353,000 som. That was about $18,500 at the exchange rate of the time.

“The internal retail space of the unfinished building is 650 square meters,” he said, showing Eurasianet copies of what he says are the deeds. “Having received papers to prove my ownership of this building, I needed to get documents for the adjacent territory too. When I applied to the Osh city administration, I was granted a license to take ownership of the plot.”

Altynai Galiyeva, a lawyer for the plaintiffs, believes that even if Shyrdakov’s claim ever had legitimacy, it has long since ceased to have standing since he failed to act upon the Osh city hall’s 1999 decree within the required time limit.

Some strange goings-on after the Teshik-Tash community were hauled into court rang alarm bells for Galiyeva. After residents inquired with the city prosecutor’s office for information about the status of the 24,000 square meters that Shyrdakov says is his, they received a response saying the circumscribed plot had not been registered with the Osh city administration for land management and real estate registration, or UZRPNI.

“But on October 2, a few months later, the same department issued documents stating that the lands adjacent to the unfinished department store still belong to Nurkul Shyrdakov,” Galiyeva said.

Shyrdakov defends the actions of the city authorities, saying they had in fact historically made efforts to rehouse the dwellers of dilapidated homes he says stand on his land.

“The owners [of the homes] … were allocated 44 plots of land,” he said. “They, however, refused to leave. And the authorities could not forcibly evict them, fearing a repetition of the interethnic conflict.”

Rustam Zaydinov, a resident of 444B Lenin Street, complained to Eurasianet that the court hearings, which continue to drag on, are repeatedly being postponed due to Shyrdakov's failure to appear. They suspect their antagonist is dragging out proceedings in the hope of finding new expedients with which to win.

“In January, we were forced to hold a rally with placards in front of the Osh mayor's office so as to convey our sense of pain to the local authorities. They promised that none of us will be left homeless, so let's hope that the outcome of the trial will be fair,” Zaydinov said.